Along For The Ride With David O’Doherty

Forget the view and lovely weather. When hill farmer and mum-of-nine Amanda Owen takes a day off in the Dales, all she can think about is her sheep.

The shepherdess — familiar to viewers from her documentary series Our Yorkshire Farm on C5 — was enjoying a solitary stroll across the fells around Wensleydale, in Winter Walks (BBC4).

It was meant to be a day of relaxation. But her mind was constantly on her flock — the woolly ones, not the two-legged type charging about in their wellies. It’s plain she knows the children are quite capable of looking after themselves.

‘I’m determined that I am not going to feel guilty that I am not at work today,’ Amanda declared, as she set off on a five-mile hike from Bainbridge to Semerwater. 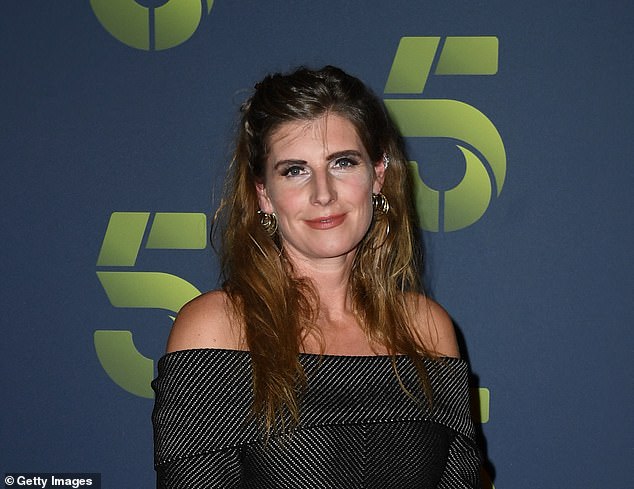 But she couldn’t help seeing everything with a shepherd’s eye. The grass was greener on these hills than at her home in Swaledale, a couple of valleys away, and that meant better grazing — which in turn promised earlier lambing.

Sure enough, she spotted a ewe with two newborns, a ‘tup’ and a ‘gimmer’ . . . one male and one female. She watched with concern, until she was sure the lambs were suckling well and shaking their tails.

On the long straight of the Roman road, she met two fellow farmers and stopped for a chinwag. ‘They speak my language . . . sheep!’ she said approvingly.

Even a chance meeting with three pony trekkers set her thinking about the advantages of farming on horseback, instead of using quad bikes. When thieves raided her farm a few years ago and stole her motorised four-wheelers, she decided it was safer, cheaper and easier to stick to horses. The sheep like it better, too — and doubtless, that’s what really matters to her.

She ended beside a glacial lake, one painted by Turner more than two centuries ago. ‘I need more days like this in my life,’ she mused. ‘I think everybody does.’

This is the first of a series of north country walks with celebrities, in a format that is also proving popular on BBC2’s Walking With . . . shows.

One of the pleasures of BBC4’s version is the occasional caption that pops up, to identify birds, animals, trees and even fossils glimpsed along the way.

Ordnance Survey grid references are supplied for hardy souls who want to recreate the route for themselves. The Rev Kate Bottley, Alastair Campbell and Radio 5 Live’s Nihal Arthanayake take us exploring more on foot throughout the week.

Those who fancy a faster pace could go Along For The Ride With David O’Doherty (C4). This week the comedian and cyclist was enjoying the Brecon Beacons with Grayson Perry. Enjoying is probably the wrong word. Grayson, jaunty and personable as a solo presenter, is too competitive to thrive in a double act.

He needs to dominate the conversation, which is fine when he is reminiscing about how he nearly joined the Army as a teenager or discussing the years of therapy he needed to undo the trauma of his parents’ divorce.

When David was talking, though, Grayson seemed too bored to reply. He was at pains to show how unimpressed he was by the Welsh landscape, as though the patchwork meadows and waterfalls were too conventionally pretty for his artistic sensibilities.

The pair were reduced to blokeish banter, just for something to say. The producers sent them to stay overnight in wooden caravans and had them playing with catapults, perhaps hoping to recreate the whimsy of Paul Whitehouse and Bob Mortimer in Gone Fishing.

They missed by miles.

Video: Aaron Paul is the picture of a doting dad while enjoying ice cream cones with three-year-old daughter Story in LA

Video: Triple-vaxxed TV star Shelly Horton shares her odd Covid symptoms after being struck down with a 'nightmare' case - and regrets saying she wanted to catch it 'to get it out of the way'

Video: Married At First Sight groom Brent Vitiello reveals his bizarre foot phobia in a new trailer for the 2022 season

© Provided by Cover Media Amy Schumer Amy Schumer is “feeling good” after recovering from endometriosis surgery and liposuction. Last September, the I Feel Pretty star shared that she had ... Read more »

In Victoria, NSW and Queensland 18 is the minimum age for a forklift licenseA 44-year-old man was killed in a forklift accident in Victoria on Monday Almost 75 per cent of all forklift incidents happen in just five industriesThere is also a proposal to recognise New Zealand truck licences in Australia  Read more »

EXCLUSIVE: Cleo Smith's parents look at changing the four-year-old's name to shield her from attention as she grows up after her 18-day alleged abduction made headlines around the world

Cleo Smith disappeared from a Western Australian campsite in October 2021The four-year-old was found 18 days later near her parents' Carnarvon homeLocal man Terence Darrell Kelly, 36, has been charged with Cleo's abductionCleo's mother Ellie has sought advice from families in similar circumstancesMs Smith has considered changing Cleo's name to protect her from attention  Read more »

Supermarket bans all shoppers who haven't been vaccinated against Covid

A supermarket in Australia has banned unvaccinated shoppers – despite grocery shopping being classed as an essential service. Grocery chain IGA has announced the move in its Yulara store in ... Read more »

Birmingham City were absolutely annihilated on Tuesday evening in what will go down as one of their worst nights of the season, but for Fulham it was just another game. ... Read more »

Aston Villa have been linked with a sensational move for Atletico Madrid striker Luis Suarez. Steven Gerrard’s former team-mate could leave Atletico for free in the summer when his contract ... Read more »

Jake Humphrey has been laughed off after comparing Frank Lampard and Thomas Tuchel’s situations at Chelsea a year on after the English coach was sacked from Stamford Bridge. During those ... Read more »

Tottenham Hotspur ‘lead the way’ for AC Milan midfielder Franck Kessie ahead of a potential move, according to Sky Sports journalist Michael Bridge.  The 25-year-old has entered the final six months ... Read more »

Nadia Bartel has a tense phone call while running errands in Melbourne... as she prepares to face court over alleged driving offences that could see her jailed

She’s set to face court in March over alleged driving offences that could land her in jail or with a large fine. And on Thursday, Nadia Bartel, 36, appeared to ... Read more »

Shelly Horton has revealed she was sick for 10 days after catching CovidThe television personality caught the virus at her friend's 50th birthday partyShe regrets saying she 'wanted' to catch it in January out of convenience Shelly experienced 'chalky' bones, a migraine and deep bone and body aches  Read more »

Body of California woman Missy Hernandez, 30, who vanished last month is FOUND in aqueduct as her boyfriend, 41, is charged with her murder

Missy Hernandez, 30, went missing on December 7, in Huron, CaliforniaHer friends became worried after the 'sociable' mother ignored calls and textsPolice visit to her home found DNA suggesting 'violent act' had been committedOfficers encountered her boyfriend Ramon Jimenez, 41, and arrested himJimenez has been charged with her murder and domestic violenceA GoFundMe page has been set up to pay for Hernandez funeral and to help look after her 11-year-old daughter   Read more »

Liverpool will recall centre-back Rhys Williams from a loan spell at Swansea to allow Nat Phillips to leave on a permanent deal, according to a report. Williams, 20, moved to South ... Read more »

Katherine Keating, daughter of former PM Paul Keating, seen back in SydneyShe posted a picture to Instagram in the company of hotels king Justin Hemmes  Ms Keating has laid low since she was spotted at Jeffrey Epstein's apartmentVideo of Prince Andrew waving her from the apartment by emerged in 2019 Read more »

Celtic closed the gap at the top of the cinch Premiership to four points this week, edging closer to Rangers two weeks before hosting the Scottish champions at Parkhead. © ... Read more »

Ashleigh Barty and Naomi Osaka continued their ruthless takedowns of the Melbourne draw as both recorded crushing victories in the Australian Open second round. World number one Barty beat qualifier ... Read more »

© KCNA via Reuters North Korea hinted Thursday it could resume nuclear and long-range weapons tests as it prepares for “confrontation” with Washington, its latest threat after a string of ... Read more »

Arsenal were handed an inadvertent boost this week with Thomas Partey’s Africa Cup of Nations campaign ending before it had even got going. Ghana’s shock defeat to Comoros on Tuesday ... Read more »

Interim manager Ralf Rangnick is being urged to make five changes for Manchester United on Wednesday night. During the second part of their double-header with Aston Villa, the Old Trafford ... Read more »

Ralf Rangnick has humbly decided to be the bigger man in the Paul Pogba debacle. The Frenchman quite clearly wants out at Manchester United after turning down a new deal ... Read more »

© Provided by Daily Record Marco Reus has lashed out at his own Borussia Dortmund team-mates ahead of their Europa League showdown after a humiliating German Cup defeat. Rangers face ... Read more »

Rory McIlroy taking inspiration from Tiger Woods ahead of 2022 season

Rory McIlroy will take a leaf from Tiger Woods’ book as he bids to build on the momentum of his post-Ryder Cup performances in 2022. McIlroy broke down in tears ... Read more »

The replacement will be rolling out this year, with complete takeover due by May 2026. The new scheme aims to provide more carers with local support and help those that ... Read more »

Alec Baldwin was seen taking his children to the Museum of Natural History in New York on Tuesday – only to discover it was closed. The actor, 63, who is ... Read more »

Jake Paul and Mike Tyson are reportedly in ‘advanced talks’ for an exhibition bout, handing a blow to Tommy Fury’s hopes of rescheduling his own clash with Paul. Fury was ... Read more »

Neil Lennon believes Scott Brown was “revelling” in goading Ryan Kent after the Rangers winger was sent off against Aberdeen on Tuesday night. Kent was dismissed after picking up two ... Read more »

Bolton Wanderers are growing increasingly confident that they will sign Millwall striker Jon Dadi Bodvarsson with the 29-year-old reducing his financial demands to try and ensure the deal gets done, ... Read more »

Video: Bob Saget's widow Kelly Rizzo fights back tears as she calls her husband 'the best man I've ever known' in first interview since his death

Manchester United looked to be in the driver’s seat against Aston Villa based on their first-half performance. Thanks to a freak Bruno Fernandes free-kick, they had created several chances and ... Read more »

If you’ve been on Twitter in the past week or two, you may have noticed a rise in people posting Tetris-like blocks made up of yellow, green and grey squares. ... Read more »

One of the Duchess of Cambridge’s go-to high street jewellery brands, Monica Vinader, has just made its first foray into homeware – and we’re officially in love. The British brand ... Read more »

Andy Murray relishes the sort of five-set epic that carried him into the second round of the Australian Open but he would happily take a boring three-setter against Taro Daniel ... Read more »

© Getty Images The the multi-format series gets under way on Thursday – Getty Images Heather Knight has urged England to be aggressive and “punch first” against Australia in the ... Read more »

Broncos will add a punter to roster after Super Bowl

‘Unreal', ‘Don't get my hopes up' – Many Fulham fans react to player's display against Birmingham City

Qatar 2022 World Cup tickets on sale: What Scotland fans need to know ahead of Ukraine play-off

Troy Aikman baffled by Cowboys abandoning CeeDee Lamb vs 49ers: 'The game is not that difficult'

Celtic goalkeeper exits to join European side on loan