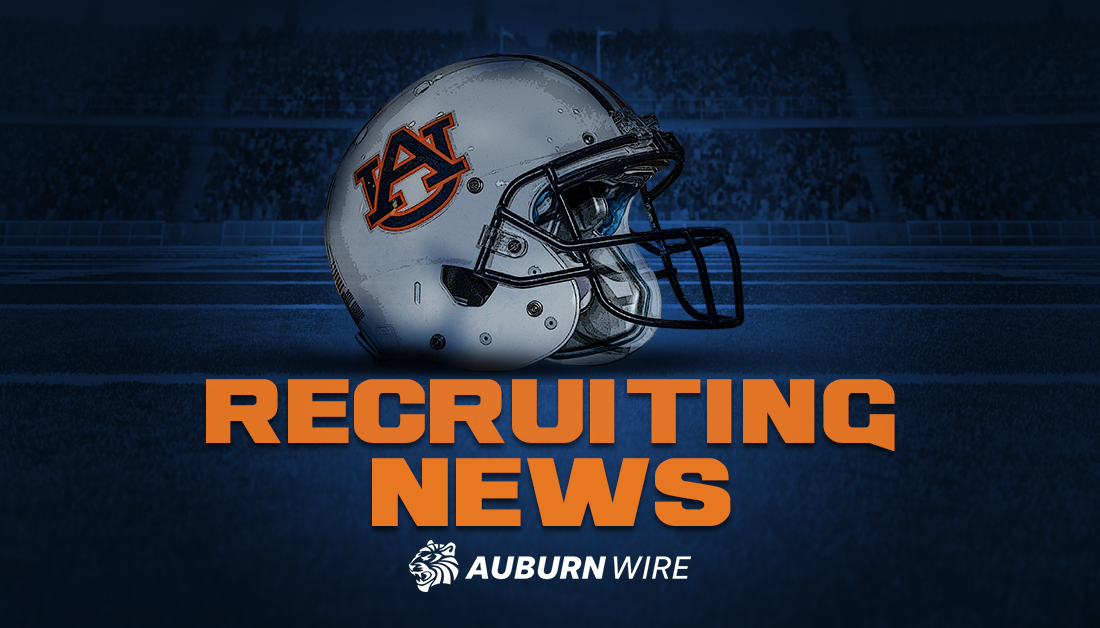 The recruitment of Darrius Clemons has taken another twist.

Clemons has had a dramatic and unpredictable recruitment, but Auburn may be able to reenter the picture for the talented wide receiver.

Auburn was at one point seen as the leader for the 4-star wide receiver but then Auburn fired his primary recruiter and position coach Cornelius Williams and Oregon ramped up their recruitment of the Portland, Oregon native.

This led to the Ducks becoming the leader and Auburn seemingly falling out of the race. However, Oregon head coach Mario Cristobal is heavily rumored to be heading to Miami to become the head coach of the Hurricanes. Also, Oregon offensive coordinator Joe Moorhead has accepted the Akron head coaching job. This has opened the door for Auburn and the Tigers will look to capitalize on the turmoil in Oregon.

It will be very important for Auburn to visit Clemons and it is worth mentioning the Tigers have yet to hire an offensive coordinator after moving on from Mike Boob, something that could impact Clemons.

Landing Clemons would be a major boost for Auburn’s recruiting class, Clemons is rated as the 22nd best receiver and 147th best recruit overall in the 247Sports composite ranking. He would become Auburn’s highest-ranked recruit. Auburn’s recruiting class currently ranks 12th in the SEC and 33rd in the country and has commitments from 4-star athlete Omari Kelly and 3-star receiver Jay Fair.

WATCH: Marlon Davidson just got a pick six off of Tom Brady

War of words over flame, Cong dials down after statue announcement

New York Islanders vs. Arizona Coyotes: They're all must-wins [Game #33]

Pros and cons of the popular weight-loss app Noom

© Provided by The Times of India Madurai: The Agrofood chamber of commerce and industry (agrofood chamber) has urged the union government to exempt all branded essential food products under ... Read more »

© Provided by The Times of India Chennai: The successful IPOs of technology companies in 2021 has encouraged more entrepreneurs to look toward going public in Indian markets and consider ... Read more »

© Jayne Kamin-Oncea-USA TODAY Sports Russell Westbrook’s first season with the Lakers has not worked out for either side. Russell Westbrook and LeBron James trying to play basketball together has ... Read more »

© Provided by Pinkvilla In today’s episode, Bagha helps Jethalal get rid of stiffness in his body by helping him in stretching. Bagha tells Jethalal that he learned to stretch ... Read more »

© Provided by The Times of India Mumbai: ICICI Bank has said that Rama Bijapurkar, an independent director, has tendered her resignation with effect from January 23, citing conflict of ... Read more »

Luke Donald looks set to be named as Europe’s Ryder Cup captain for the match in Rome next year after a ringing endorsement from current skipper Padraig Harrington. The Irishman ... Read more »

There was a time on the golf course Friday when Danielle Kang wondered where she’ll put her competitive fire when her LPGA days are over. Here she was playing alongside ... Read more »

© Provided by The Times of India Mumbai: They’re just memes, but promise to unseat any traditional advertising campaign and outwit any influencer too. Dolo 650 is having its moment ... Read more »

Bruins' Brad Marchand out at least one game after questionable hit

The Boston Bruins notched a 4-3 win over the Washington Capitals on Thursday night but endured a couple of costly setbacks along the way.   © Brian Fluharty-USA TODAY Sports ... Read more »

© Provided by The Times of India LUCKNOW: As the nomination for the first phase of UP assembly elections is about to end and the Election Commission is yet to ... Read more »

Due to pandemic HC restores directions issued to Chandigarh, Punjab, Haryana till February 28

The latest stage of Naomi Osaka’s complex tennis journey will see her drop to below a ranking of 80, abruptly going from a leading role into the chorus line. Her ... Read more »

Lyon eked out an ugly 1-0 victory over struggling neighbours Saint-Etienne on Friday with a 15th-minute penalty by Moussa Dembele.  © JEFF PACHOUD Moussa Dembele celebrates after converting his penalty ... Read more »

MADRID (AP) — Real Betis continued its good run with a 4-1 win at Espanyol on Friday, strengthening its hold on third place in the Spanish league. It was the ... Read more »

© Provided by The Indian Express An 11-year-old boy died after allegedly accidentally shooting himself at his house in Nuh Thursday morning. The boy’s parents had gone to a police ... Read more »

© Provided by The Indian Express The Amar Jawan Jyoti, the eternal flame burning continuously for five decades at India Gate in honour of soldiers who died for the country, ... Read more »

© Provided by Raiders Wire The Raiders are wasting no time in their efforts to find a replacement for recently fired Mike Mayock as General Manager. Today former Bengals scout ... Read more »

© Provided by The Spun fox NFL analyst troy aikman down on the field Earlier this week, former Dallas Cowboys quarterback Troy Aikman had a blunt response to the team’s ... Read more »

© Provided by The Spun Dallas Cowboys head coach Mike McCarthy on the field. Despite getting knocked out of the playoffs on Wild Card Weekend, the Dallas Cowboys have not ... Read more »

© Provided by Dot Esports After the first week of the 2022 LEC Spring Split, Rogue closed out their matches with an undefeated record. And they’ll remain flawless for at ... Read more »

How to set up multi-factor authentication through Riot Games

© Provided by Dot Esports Riot Games this week expanded its multi-factor authentication capabilities for users. All you need to do to get started is make a quick change to ... Read more »

Eriksen back at Future, to taste group feeling at Young Ajax

A surprising sight on Friday at De Toekomst, the training complex of Ajax: Christian Eriksen. The Dane was not there to seal a return, but to train once with Jong ... Read more »

© Provided by The Spun Chris Simms on set with ProFootballTalk commenters. Now that Joe Schoen is officially the general manager of the New York Giants, the franchise can shift ... Read more »

PSV have recently attempted to sign Liverpool defender Nathaniel Phillips, in principle on a rental basis. Liverpool are currently only looking to sell 24-year-old Phillips for €12 million, but that ... Read more »

© Provided by The Times of India NEW DELHI: While releasing its first list of 34 candidates for the Punjab assembly elections, BJP once again attacked chief minister Charanjit Singh ... Read more »

Man sets himself on fire outside SC; family says he was sacked from job, not paid in three months

© Provided by The Indian Express A 50-year-old man set himself on fire outside the Supreme Court Friday afternoon, with an initial investigation revealing that he used to work at ... Read more »

© Provided by The Times of India IMPHAL: The Election Commission (EC) on Friday notified that members of Manipur militant groups that signed ceasefire agreements with the government, whose names ... Read more »

The demands of three knockout ties in eight days, including a Spanish Super Cup final in Saudi Arabia, sparked a rare outburst this week from Carlo Ancelotti but amid anger ... Read more »

Have the lights gone out on Watford and Claudio Ranieri? Josh Sargent, the American scoring two fine goals, the first a piece of volleyed improvisation, the second a fine header, ... Read more »

Canada Soccer confirmed that a limited capacity of fans would be enforced in the match against the US men’s national team to be in accordance with all relevant public health ... Read more »

The push for the top four in the Premier League continues on Saturday with a big one as fourth-place West Ham host seventh-place Manchester United. The Hammers are 11-4-7 with ... Read more »

The Toronto Raptors, generally good at avoiding off-court drama, might be facing a “LaVar Ball” type of problem. Malachi Flynn has seen limited reps with the Raptors this season. (Getty) ... Read more »

Cody Stamann: Said Nurmagomedov a big name – even if he's not related to Khabib

ANAHEIM, Calif. – There’s a big name across from Cody Stamann on Saturday at UFC 270 – even if that name is no relation to one of the all-time pound-for-pound greats. ... Read more »

Lisandro Magallan: ‘When Messi approached me, I was speechless'

Premium The best of De Telegraaf Ajax mercenary from Anderlecht made a name in home country Argentina thanks to Netflix We used to call him Lisandro Mag al go. Every ... Read more »

Next round of World Cup qualifying presents many challenges for USMNT

Panthers to hire Ben McAdoo as OC over Scottie Montgomery