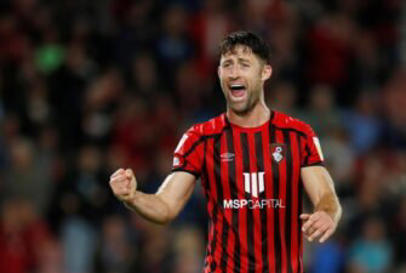 Bournemouth ensured that they would remain at the Championship summit yesterday afternoon, with a convincing 2-0 victory over Bristol City.

The Cherries, who have now made it 12 league games without a defeat this season, now find themselves on 28 points and remain three points clear of West Bromich Albion in second.

Marking his full debut with a goal, Jamal Lowe opened the scoring in the 21st minute when he volleyed in Jack Stacey’s pinpoint cross from close range.

Jordan Zemura then doubled the lead in emphatic fashion on the stroke of half time when he eased past the defender before unleashing an excellent strike past Dan Bentley in the Robins goal.

The Cherries limited the home side to very little in regard to opportunities to get back into the game, with Gary Cahill putting in another strong and commanding performance at centre-back.

The former Chelsea defender is proving to be an excellent summer addition for the south coast club, and he is certainly playing his part in what has been a brilliant start for his side.

The defender dropped down to the Championship this season, after numerous years of competing in England’s top-flight and in Europe, with his maturity, reading of the game, and physical presence, all combining to Bournemouth’s benefit.

Here, we take a look at how Bournemouth fans on Twitter reacted to his performance yesterday…

That was easily one of the best Bournemouth games I’ve ever been to! It really was a sensational performance and atmosphere!! Cahill and Kilkenny were our standout players in my opinion. UTCIAD!!! #afcb 🍒 pic.twitter.com/8nyymTuqoW

Was that the easiest game you have ever played in? Either they were bad or we are getting better and better and teams can’t touch us

Great game big fella, like your calm experience,hope you’re glad you signed up to 🍒 🍒

The rich postcodes where motorists are more likely to own an electric car - and YOUR taxes are funding their $5,540 subsidy

Furious Everton fans chant 'sack the board' inside Goodison Park, with many more having led an early exodus during 4-1 hammering by Liverpool in their worst home Merseyside derby defeat in 39 YEARS

‘I'll kick your f**king a**…stupid dog': Indiana cop is slammed over video showing him KICKING ‘hero Boston terrier that scared off burglar' – but PD insists video is misleading and says officer did nothing wrong

Steve McManaman accuses Everton of 'WASTING money' on players with a lack of options on bench in Liverpool defeat... as he predicts club are heading for a 'relegation battle' which will see boss Rafael Benitez fired

The Women’s Tennis Association has suspended tournaments in China amid concerns of missing star Peng Shuai. AP Photo/Andy Brownbill, File In the strongest public stand against China taken by a ... Read more »

© Netflix Pokémon’s 25th anniversary collector box has announced its UK release date and pricing. Pokémon is wrapping up its 25th anniversary with something trainers have truly been waiting for. ... Read more »

© Group LA/Disney Channel via Getty Images Britney Spears is calling out the paparazzi. The 39-year-old singer took to Instagram on Wednesday to share photos of her and her fiancé, ... Read more »

Five major publishers have sued Shopify over pirated learning materials like PDFs of ebooks and test materials, saying the e-commerce platform fails to remove listings and stores that violate the ... Read more »

© Provided by Daily Mail MailOnline logo Shamed Matt Hancock has admitted he had ‘blown up every part of my life’ after he was caught on CCTV cheating on his ... Read more »

© Provided by Top Gear Philippines Are you a fan of the Department of Public Works and Highways’ (DPWH) continuous push for more roads in the Philippines? If the answer is ... Read more »

Rafael Benitez defiant as Everton fans chant 'sack the board'

Dec. 1—The suspect in an active multi-county manhunt threatened to kill at least two people before disappearing near Sweetwater Road and S.C. Highway 23. Arrest warrants obtained from the Edgefield ... Read more »

Law enforcement across Western North Carolina are searching for a man charged with the shooting death of 29-year-old Kedrick Tevon Green on Nov. 18. A man has been charged with ... Read more »

Dec. 1—The mother of a 3-year-old allegedly assaulted on Oct. 21 at The Sunshine House on Summerwood Way in Aiken is suing the corporation, the employee that is charged with ... Read more »

A popular shampoo has been urgently recalled over concern it may be contaminated with a bacteria that can “cause significant infection or illness”. Product Safety Australia issued the recall for ... Read more »

© Provided by The Indian Express Three persons died and many were injured in an explosion at an firecracker manufacturing unit in the Nodakhali police station area of the South ... Read more »

Bengal: RT-PCR tests, 14-day quarantine must for all overseas passengers

© Provided by The Indian Express Amid global alarm over the new Covid variant Omicron and the Centre asking all states and union territories to step up testing and surveillance, ... Read more »

Growth recovers from the second wave

© Provided by The Financial Express The Q3 GDP outturn is marginally above RBI’s projection of 7.9% y-o-y and confirms the economic recovery from the second wave. By Sonal Varma ... Read more »

In PM's December list for UP: AIIMS in Gorakhpur to Kashi Dham corridor

© Provided by The Indian Express Ahead of the Assembly elections in Uttar Pradesh, Prime Minister Narendra Modi is set to inaugurate several mega infrastructure projects and launch new ones ... Read more »

People on-board a boat which sunk in the English Channel last week may have called UK authorities for help when they realised their inflatable dinghy was deflating, a Home Office ... Read more »

The brave stars who are appearing in this year’s Full Monty spectacle have revealed the moving reasons behind their decision to bare all. The ITV show, choreographed and hosted by ... Read more »

Saul is substituted at half-time AGAIN for Chelsea

© Provided by Daily Mail MailOnline logo Saul Niguez’s nightmare loan spell at Chelsea took another turn for the worst after being subbed at half-time for the second time in ... Read more »

15th typhoon may enter PHL this week but no impact seen

© Provided by BusinessWorld SEVERE tropical storm Nyatoh might be within the Philippine area by Thursday morning, but it is expected to just brush through the eastern boundary and stay ... Read more »

© Provided by Dot Esports Pokémon Legends: Arceus will be launching early next year, bringing gamers into the next generation of Pokémon. To match the latest game, you can get ... Read more »

© Reuters/Lucas Jackson FILE PHOTO: Traders work on the floor of the New York Stock Exchange shortly after the opening bell as trading is halted in New York By Hari ... Read more »

© Provided by GamePur The Lax Incense is one of the items that you can give to a Pokémon to hold. While holding the Lax Incense, the Pokémon is less ... Read more »

Thierry Henry claims Liverpool 'are on a different planet' after the Reds' 4-1 derby win over Everton... but the Arsenal legend insists title rivals Chelsea and Man City are also 'in a rhythm'

Square is changing its name to 'Block'