GDP – the total market value of all goods and services produced within a country in a year – is used to gauge the economic strength of a country. In 2021, the UK’s GDP grew more than expected, despite low projections due to the coronavirus pandemic and Brexit knock-on effects, and this positive upward trend is forecast to continue.

A study, published by Statista, forecasts British GDP to grow by 1.65 percent in 2023.

The US is forecast for 1.39 percent growth for the same period, followed by Germany on 1.21 percent.

The chart shows the UK behind the collections Western European nations, on 1.74 percent, but remains leagues ahead as a standalone economy.

Forecasts such as this rely on a number of factors, including past performance, global trends and inflation – and they aren’t always correct. 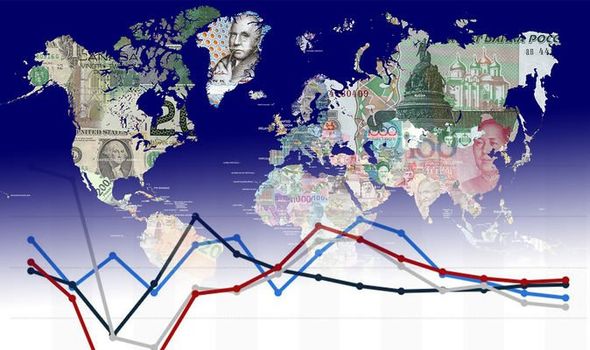 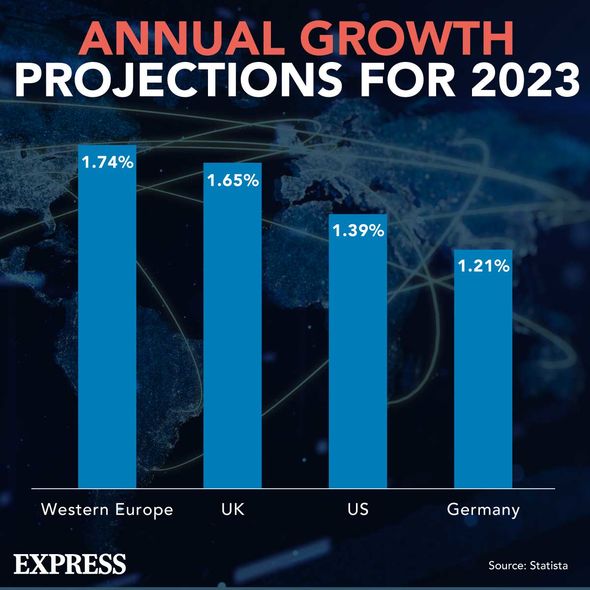 For example, the UK proved in the second quarter of 2021 that GDP estimates can sometimes be too conservative.

In Q2 of 2021, UK GDP grew by 5.5 percent, the Office For National Statistics (ONS) said – when economists had forecast 4.8 percent as lockdown eased.

The ONS said the data had been adjusted to take account of more complete data from the health sector as well as an update of its sources and methodology for calculating output. 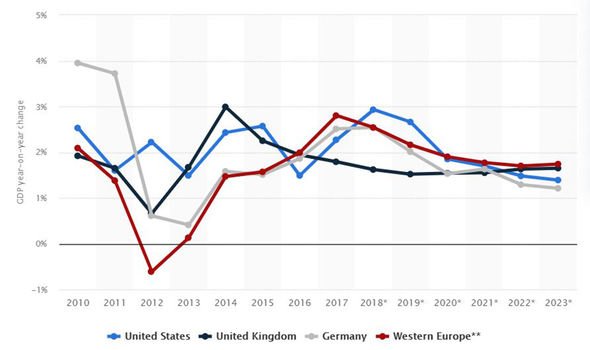 The revision means Britain was no longer the worst-performing economy among Group of Seven developed countries, when comparing GDP in the summer of 2021 with its level at the end of 2019.

The UK is now tied with Germany and above Italy for Q2.

The figures serve to provide a more complete picture of Britain’s swift economic bounce-back from its coronavirus lockdown earlier this year.

However, there are now signs of a loss of momentum, and while the 2023 forecast looks to keep the UK level with global competitors, it is still a notable reduction.

Ruth Gregory, an economist at Capital Economics, said: “While the upward revisions to GDP are clearly welcome, Q2 was three months ago, and the recovery appears to have stagnated since.

“Even so, given that there is now thought to be less spare capacity in the economy that will only encourage the Bank of England to hike rates in the not too distant future.”

Last month, Bank of England (BoE) Governor Andrew Bailey said he thought the economy would regain its pre-pandemic level of output in early 2022 – a month or two later than the BoE had forecast in August.

Despite the slowdown, the British central bank has signalled that it is moving towards a first interest rate hike since the pandemic as warned inflation could reach five percent. 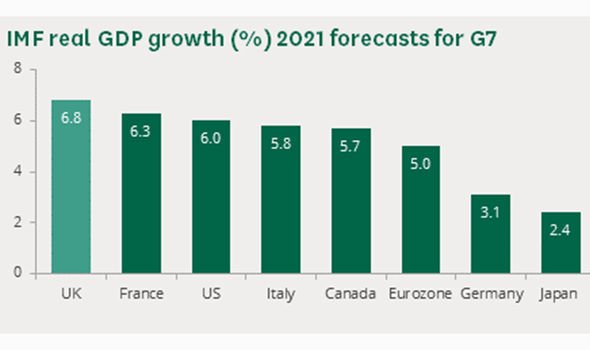 Last week, the PMI index rose to a three-month high of 56.8 in October, up from 54.9 the previous month.

The increase was driven by the services sector, which accounts for about 80 percent of the economy, with a corresponding index rising to a three-month high of 58.

The reading, based on interviews carried out between October 12 and 22, surpassed the 54 forecast by economists polled by Reuters.

The index, published by the research group IHS Markit and the Chartered Institute of Procurement and Supply, provides a measure of the health of the services and manufacturing sectors.

But he added: “The record readings . . . will inevitably pour further fuel on these inflation worries and add to the case for higher interest rates.”

Jordan Spieth, Henrik Stenson involved in a bizarre rules infraction at Hero World Challenge, have good laugh about it after round

Five reasons your feet are always cold, from diabetes to stress

Reaction to Bob Dole's death from US dignitaries, veterans

24 gharials from MP released into Beas in Hoshiarpur

Mathura Police beef up security ahead of December 6

Cuomo's CNN firing due to 'ego, hubris, and a complete lack of a moral compass': Concha

Man shot in parked vehicle in Pittsburgh drives self to hospital

Dec. 5—A man drove himself to the hospital early Sunday after being shot while sitting in a parked vehicle on West Liberty Avenue, according to Pittsburgh Police. The shooting was ... Read more »

Aston Villa got back to winning ways at Villa Park this evening with a 2-1 win over Leicester City, as Ezri Konsa’s double handed Steven Gerrard his third win as ... Read more »

© Provided by Football FanCast barisic Giovanni van Bronckhorst managed to secure his third league win in a row as Rangers manager with the Ibrox side securing a recent 3-0 ... Read more »

© Provided by The South African Ever had some indulgent s’mores? If not, we have just the recipe for you. And even if you had it before, this is a ... Read more »

Aston Villa look a team rejuvenated under Steven Gerrard with three wins from four matches since he joined from Rangers in November. Villa ‘s 2-1 defeat of Leicester City on ... Read more »

How to beat Zenos in Final Fantasy XIV

© Provided by GamePur Zenos is the final battle of Endwalker. An opponent who has been pursuing you since Stormblood, you finally get the chance to take care of him ... Read more »

James ‘Arg’ Argent cut a trim figure as he stepped out over the weekend. Earlier this year, the reality star bravely decided to undergo gastric band surgery after doctors warned ... Read more »

The good news for Leicester City is that a controversial moment in the game helped mask the extent of their defensive deficiencies. The bad news is Aston Villa still pierced ... Read more »

Former Scotland rugby captain Gary Callander has died at the age of 62, after a short battle with cancer. His hometown club Kelso, south-east of Edinburgh and close to the ... Read more »

Lukas Nmecha FIFA 22: How to Complete the TOTGS SBC

HOSPITAL wards in South Africa are filling up with sick kids that have Covid as the “super mutant” Omicron strain continues to sweep through the country. A South African doctor ... Read more »

© Reuters/JAMES AKENA General view of Bwera town near the border with the Democratic Republic of Congo in Bwera By Elias Biryabarema KAMPALA (Reuters) – Uganda said on Sunday it ... Read more »

Video: Firebrand French Presidential challenger Eric Zemmour is ATTACKED and put in a headlock during his first campaign appearance

Seinfeld and Grey’s Anatomy actor Lou Cutell has passed away at the age of 91, his close friend has said. The star, who is known for roles such as the ... Read more »

Red Riding Hood review – my, what weak jokes you have, grandma!

© Provided by The Guardian Photograph: Tristram Kenton/The Guardian Red wears a magic hoodie in this pantomime, and sets off into the woods to deliver essential goods to her dame ... Read more »

Journalist Pete O’Rourke has said that Divock Origi has been a long-term target for West Ham but doubts whether Liverpool would let him go in January. © GiveMeSport p1fltuupgbrlqn00b0u1d7ovqqb.jpg With ... Read more »

Dominic Raab Criticised For Suggesting Police Don't Investigate The Past

(Photo: Hollie Adams via Getty Images) Dominic Raab has been criticised by Labour after he suggested it would be unusual for the police to investigate crimes that happened last year. ... Read more »

The Russian Tennis Federation has won the 2021 Davis Cup Finals after world No 2 Daniil Medvedev clinched the second and final point for his country in Sunday’s final. He ... Read more »

Many Aston Villa fans have been left slamming the display of Douglas Luiz despite their 2-1 win at home to Leicester City in the Premier League. © Provided by Transfer ... Read more »

© Provided by dw.com Russia claims an Aeroflot aircraft and another plane from Malta had to rapidly change course Moscow has accused the United States of putting civilian lives at ... Read more »

“Paradise” appears to have been found for Ryan Tannehill and his wife, Lauren. Over the weekend, the wife of the Titans quarterback, 33, shared a cozy snap of the couple ... Read more »

'Insecure' and the defiant come-up of Issa Rae

© Provided by Independent Online (IOL) By Bethonie Butler There’s a moment in the season five premiere of Insecure when Issa (series creator Issa Rae) talks to her younger self ... Read more »

© Provided by Khaleej Times ANI Bollywood actor Katrina Kaif, who is speculated to marry Vicky Kaushal in the forthcoming week, on Sunday was spotted outside the latter’s residence along ... Read more »

Banksy has offered to raise millions of pounds towards buying Reading prison, where Oscar Wilde was once held, so that it can be turned into an arts centre. © Provided ... Read more »

© Provided by Daily Mail MailOnline logo Four men including a 17-year-old boy were arrested on suspicion of murder after a man died over the weekend. Police arrested a man, ... Read more »

Ahead of the Autumn Budget in October, the Government announced National Insurance payments for employers and employees would be temporarily increased by 1.25 percent, costing Britons hundreds of additional pounds ... Read more »

'Bob was an American statesman like few in our history:' Biden and McConnell lead tributes to late Kansas Senator and former presidential candidate pour in on social media

Silverwood: Australia will be wary of 'superstar' Stokes

Video: Autism in girls in the spotlight as Christine McGuinness opens up about diagnosis

Bob Dole: a soldier, a politician and a Republican of the old school