The State Department’s Rewards for Justice program said Ghafari had taken over as head of the Islamic State-Khorasan Province – using a historical term for the region – in June 2020.

‘An ISIS communiqué announcing his appointment described al-Muhajir as an experienced military leader and one of ISIS-K’s “urban lions” in Kabul who has been involved in guerrilla operations and the planning of suicide and complex attacks,’ it said, using one of his known aliases.

ISIS-K previously previously fought the Western-backed government that fell in August as well as the Taliban.

The State Department said Ghafari was responsible for approving all ISIS-K operations throughout Afghanistan and arranging funding to conduct operations.

It declared him a ‘Specially Designated Global Terrorist’ in November. 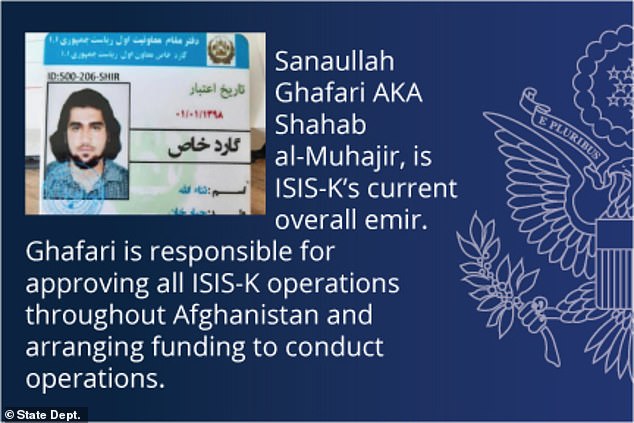 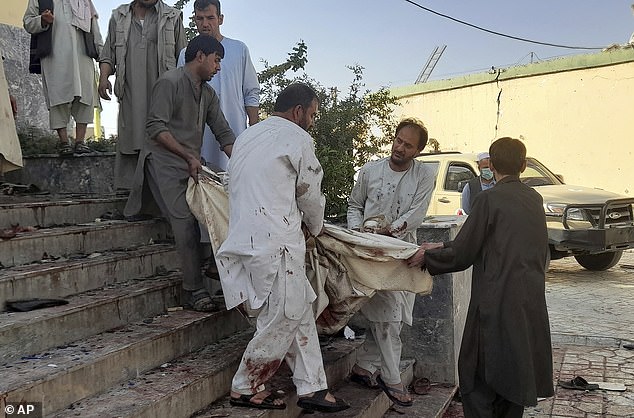 ISIS-K has been responsible for a string of bloody attacks across Afghanistan. In October 2021, it claimed a mosque attack that killed and wounded dozens of people in Kunduz

The bombing occurred on Aug. 26 as U.S. troops were trying to help Americans and Afghans flee in the chaotic aftermath of the Taliban’s takeover, and compounded America’s sense of defeat after 20 years of war.

It was the darkest chapter in the operation, and prompted questions about why the Biden administration had not been better prepared.

Investigators laid out a detailed account of the how the bombing was carried out.

A lone bomber, dressed in black, carrying about 20 pounds of explosives was responsible, they said.

He was able to approach the airport’s Abbey Gate without being stopped because Afghans had begun using a variety of different routes to avoid Taliban checkpoints.

Investigators displayed photographs taken of the crush in the area just before the blast and explained that Marines were forming human barriers to prevent people getting through unchecked. 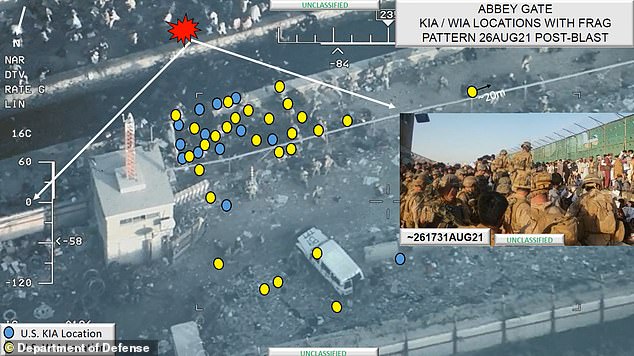 Slides shown during Pentagon briefing show how the US dead and wounded were close to the canal where the bomber detonated his explosives, and had clustered together to search potential evacuees. The worst hit were standing on a wall overlooking the canal

They said the bomber detonated his explosives by a canal that formed part of the physical defenses of the airport – and likely raised the bomb in the air as he did so.

The found the remains of a tattered backpack among the debris.

The dead and wounded Americans were hit as shrapnel and ball bearings flew across the canal ditch, and the worst hit had been standing up on a wall to search potential refugees.

Although the greatest threat remains within Afghanistan, officials in October said they feared ISIS-K could develop the ability to strike outside the country within six to 12 months.