The French President has been engaged in a diplomatic row with Britain over French boats’ post-Brexit fishing rights in UK waters. A French government spokesperson said this week France is preparing retaliation measures over the fishing row with the UK – which could be enforced as soon as next week.

But Generation Frexit leader Charles-Henri Gallois argued Macron’s efforts should be directed at the EU – as he defended the UK’s application of the Brexit trade deal with the bloc.

He told Express.co.uk: “Macron should blame the EU instead of the UK, the UK is just applying the deal.

“The deal stipulates that you should only be allowed to fish in UK waters if you had been fishing between 2012 and 2016. Lots of French fleets are below 12 metres and don’t have a recording system to prove that they were fishing during those years.

“Their views should have been taken into consideration by the EU during the negotiations. 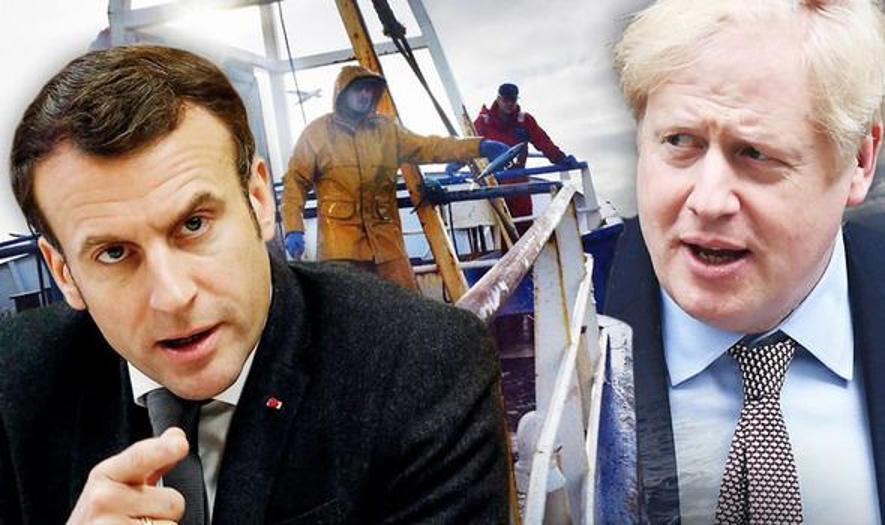 “But also, the French fishermen face the same issues as the British ones because now that the European boats are banned from UK waters they are all fishing in French waters.

“And if France was outside the EU and French waters were only for French fishermen they wouldn’t have to go to the UK.

“There is simply not enough fish for everyone now in French waters.

“France outside the EU could have a much better deal with the UK because they have common interests in terms of fishing.

“Many fish are born on the French side and then go to the UK side so there are common interests that could be solved with a bilateral agreement between the UK and France if France left the EU.”

France has been left furious at the number of licenses its fishermen have been granted by the UK to fish in British waters after Brexit.

Last month, the UK said it had approved just 12 of the 47 applications it had received from small boats in France.

Anger intensified when the Jersey Government said that, of 170 licence applications it had received from French boats, close to half (75) had been rejected.

Speaking from the port of Boulogne-sur-Mer, French fisherman Laurent Merlin said they are “in a constant state of anxiety and anger”.

In a huge warning to the UK, he told the BBC: “We are waiting until Friday, and then we’ll start to organise ourselves to attack. 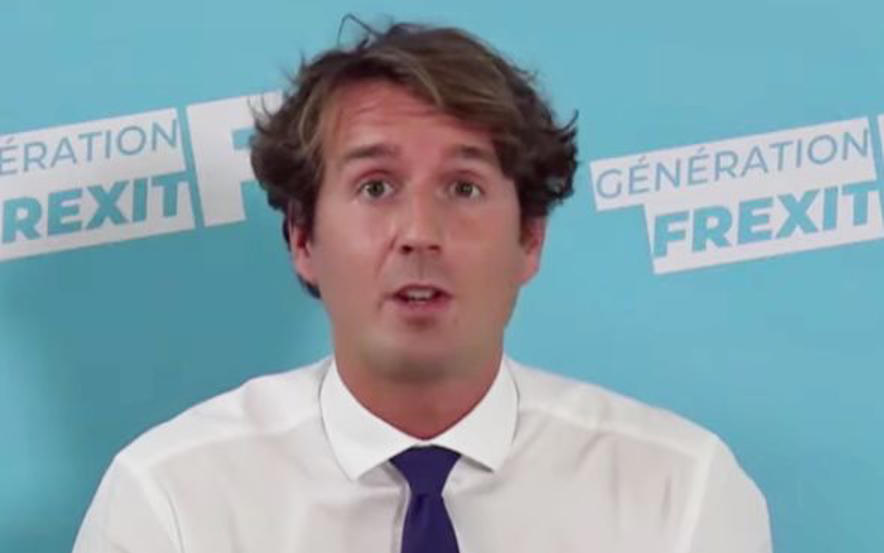 “We’ll create as much disruption as we can, by blocking the things Britain needs the most.

“We saw the impact of the gas shortage; we’ll try to create another shortage of something else.

“We’re ready to block everything: Calais, Dunkirk, the Channel Tunnel. We need this fishing licence and we’ll do anything to get it.”

Benoit Firmin, who is the manager of the local fishing committee in the region, warned that any blockade would likely target Christmas supplies and be wider than just the port in Boulogne.

He even took a swipe at the continued supply chain crisis sweeping throughout the UK, and said: “We haven’t even blocked yet and already there is a lack of food, petrol and staff.”

Mr Firmin added: “Are we going to make things worse? Maybe, but there’s a lot of frustration among the community, so fair enough.”

Earlier this month, French fishing industry representatives had already threatened to block the port of Calais and stop exports to the UK in the run-up to Christmas.

This came after French European minister Clement Beaune warned EU member states are preparing to announce measures to apply pressure on the UK to abide by the terms of the Brexit deal.

He raged: “We defend our interests. We do it nicely, and diplomatically, but when that doesn’t work, we take measures.

“For example, we can imagine, since we’re talking about energy, the United Kingdom depends on our energy supplies.

“It thinks that it can live all alone, and bash Europe.”

Hospitality Association worried about impact of new variant on SA

WhatsApp tips: How to customise the app for yourself on Android

Ranbir Kapoor or Shahid Kapoor: VOTE for the dapper dude who styled his casual look perfectly with jacket?

© Provided by Football FanCast hayden After rescuing a point in their previous Premier League outing and the first match in Eddie Howe’s reign at the club with a 3-3 ... Read more »

Liverpool: Jurgen Klopp tells Sadio Mane to ‘pay back with football' if teams target him

© ES Composite TottenhamPredictedXISonv2.jpg Antonio Conte is set to ditch the reserves who failed to beat NS Mura ahead of Sunday’s Premier League trip to Burnley. A number of fringe ... Read more »

Migrating starlings fly at dusk past electricity pylons silhouetted by the sunset of a clear autumn evening in the Kent countryside, in Graveney, Britain (Reuters) – National Grid said on ... Read more »

Photo credit: Max Mumby/Indigo – Getty Images A Royal expert has hinted that Her Majesty the Queen might have a secret Facebook account, revealing that she has “extraordinary” technology skills. ... Read more »

Britons are urgently trying to get back to England from southern Africa to try an avoid the £2,235 hotel quarantine which kicks in at 4am tomorrow. © Associated Press People ... Read more »

© Provided by Hindustan Times The health minister also requested those who have not yet taken the second dose of the Covid-19 vaccine to get the same on priority. (ANI ... Read more »

Dutch health authorities said Saturday that 61 passengers from two flights from South Africa tested positive for Covid-19 and the results were being examined for the new Omicron variant. © ... Read more »

RT-PCR test not mandatory for children on Sabarimala pilgrimage: Kerala

© Provided by Zee News Srinagar: With the assembly elections likely to be held by May-June next year, various political parties in Jammu and Kashmir have started increasing their footfall ... Read more »

Aston Villa make the journey down to London to take on Crystal Palace this weekend as Steven Gerrard looks to build on his perfect start. The new Villa boss got ... Read more »

Edinson Cavani has confirmed that he spent the international break focussing on recovering from his tendon injury. Cavani, 34, has been plagued with injury problems since his move to United ... Read more »

Manchester United will be looking to build on Tuesday evening’s morale-boosting victory over Villarreal when they travel to Stamford Bridge to face league leaders Chelsea on Sunday afternoon. United, who ... Read more »

There has been a lot of talk this week about just what constitutes a deliberate knock-on in the game of rugby. That follows two much debated incidents during Wales’ victory ... Read more »

Keith Downie has been speaking on Newcastle Fans TV about the Magpies’ search for a director of football. © Provided by This is Futbol Amanda Staveley Read all the latest ... Read more »

Lots of Tottenham Hotspur fans have vented their anger with footage of Tanguy Ndombele emerging from their game on Thursday night. © Provided by This is Futbol Tanguy Ndombele looks ... Read more »

© Provided by Football League World Tony Mowbray Tony Mowbray has given his backing to Jan Paul van Hecke on his return from suspension.  Van Hecke is likely to deputise ... Read more »

Rebecca Maddern has walked away from Channel Nine after almost six years at the network. The 44-year-old, who hosts Australian Ninja Warrior and Weekend Today, exited following a lengthy contract ... Read more »

WE all know Simon Gregson as Coronation Street's Steve MacDonald, and his wife Emma Gleave also once had a crack at soap acting. The couple were even introduced by fellow ... Read more »

How to complete Emerald Dreams in No Man's Sky Expedition 1: Pioneers

© Provided by GamePur Emerald Dreams is the seventh Milestone in Phase three of No Man’s Sky Expedition 1: Pioneers. To complete it, you need to visit a system with ... Read more »

WHEN it comes to style and beauty icons, Mr. Bean isn’t exactly top of the list. So when Fabiola Baglieri found herself with the nickname of “Mr Bean’s daughter”, she ... Read more »

A “LOVELY” pub has been praised for saving “stranded” travellers from snow and 90mph gales by offering soup and shelter. The Brewers Arms in Berwick-on-Tweed, Northumberland, has set up a ... Read more »

FORMER England captain Michael Vaughan has apologised to Azeem Rafiq for the treatment he endured while at Yorkshire Cricket Club. The 47-year-old has again denied that he had ever made ... Read more »

KATIE Price's ex Kris Boyson has revealed he misses her children and hopes the star gets the help she needs after a turbulent few months. Kris, 33, and Katie, 43, dated ... Read more »

The 'betrayal' that could kill Britain's railway romance

The romance of rail travel has seduced many travelers over the years. Sitting in a train as it slips quietly out of a city, along tunnels and viaducts, sneaking glimpses ... Read more »

‘A core threat to our democracy': threat of political violence growing across US

Alexandria Ocasio-Cortez stood on the House floor and implored her colleagues to hold Paul Gosar accountable for sharing an altered anime video showing him killing her and attacking Joe Biden. ... Read more »

CHRISTCHURCH, New Zealand — When Josephine Bartley, a councilor in Auckland, New Zealand, heard that a local Covid-19 vaccination clinic had been vandalized in early November, she drove over to ... Read more »

Vicky Kaushal's cousin sister SHUTS down rumours of his wedding with Katrina Kaif!

Omicron Tracker: Samples of Covid+ Travellers from 12 'At Risk' Countries to be Sent for Genome Sequencing

After relegation 3 days into job, new Waterford boss says call to take over on Tuesday came 'totally out of the blue'

This Is Why Lush Just Quit TikTok, Instagram & Other Social Media Platforms

Trauma, identity and love: Being adopted didn't give me a better life, but changed my path

Video: Laverne Cox, 49, admits she is 'super happy' to be off dating apps after finding love with her current boyfriend on Tinder

Fight iron deficiency with these 7 winter fruits and veggies