This week’s White House Report Card is another bad one for President Biden who appears helpless to take charge of his sinking ship. 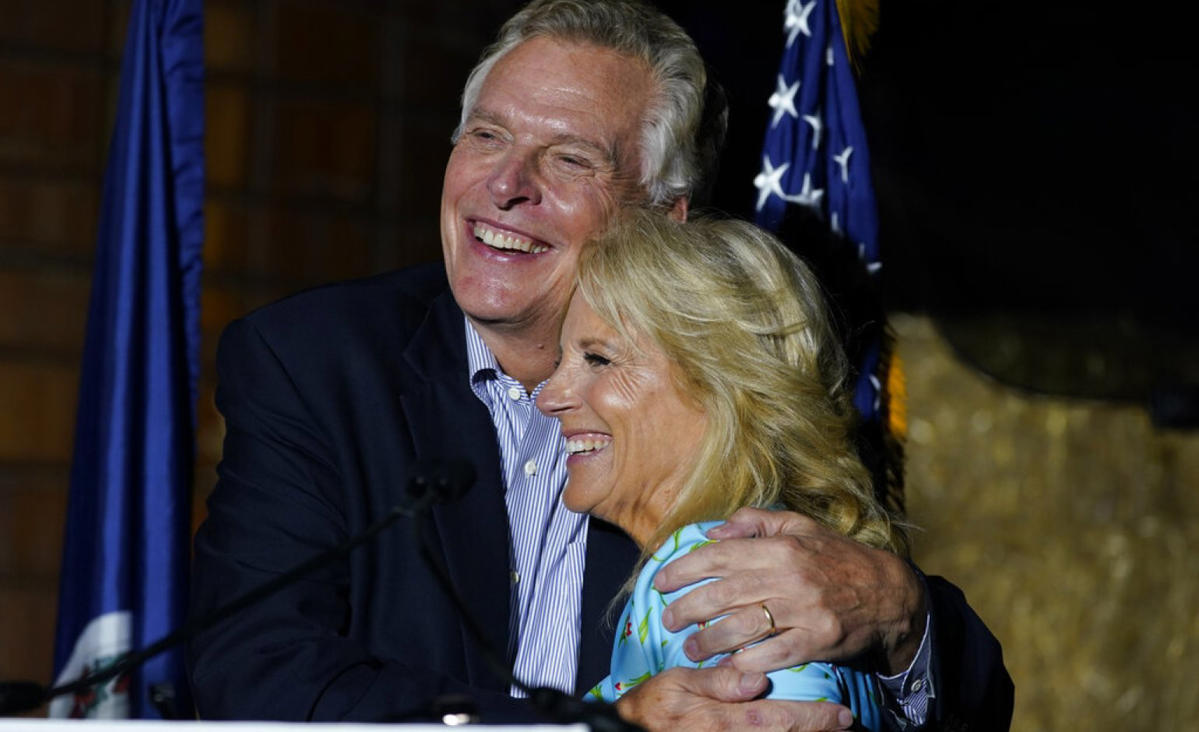 While he did see movement on his $3.5 trillion spend and tax bill, it was only because he talked of cutting the price. Meanwhile his polling continues to sink, down to 36% approval, as Americans worry about the coronavirus vaccines and boosters and inflation.

A sign of panic swept through Virginia where Biden’s low polling threatens the once sure election of Terry McAuliffe back as governor. First lady Jill Biden joined the Democrat — but not the president himself.

Our graders were unanimous on it being a rotten week. Democratic pollster John Zogby graded a “D,” and noted Biden’s struggles with his own agenda. Conservative analyst Jed Babbin graded “D-” and pointed to several problems overseas.

Finally, there are some signs of progress on COVID-19. The numbers of deaths and new cases are on the decline. Signs point to the efficacy of vaccines, new rounds of boosters will be available shortly and most of those who self-identify as “hesitant” do eventually receive vaccinations when their employers mandate them to.

President Joe Biden and the Democrats are focusing attention on the two infrastructure bills but this issue has become lost in the Bermuda Triangle known as the Beltway — and thus remote from the kitchen tables and family rooms where it needs to be discussed. The Democrats, instead of laying out the benefits of the bills to families and individuals, have allowed themselves to be mired in both an ideological battle and the weird battles between one senator and unforgiving progressives.

If Biden is going to get control of the situation, he will first have to persuade Americans that real progress is being made on containing the spread of COVID and how the next phase is to get real families back on their feet. He needs to do a national tour to political swing states and explain the stakes involved in real and personal terms. Drop the talk about “trillions” in spending and return the conversation to hundreds and thousands of dollars. Right now, he is not in control.

Applications for unemployment benefits were down but good economic news has gotten lost.

It was another not-so-good week for President Biden, beginning with Indigenous Peoples’ Day (Columbus Day to the rest of us) and continuing on through no release of U.S. civilians by the Taliban, more Bidenflation and enlivened only by House Speaker Nancy Pelosi’s scolding of the media.

Hundreds of U.S. civilians are still stuck in Afghanistan and there’s no effort to rescue them. The State Department wants to resume evacuation flights, but that’s up to the Taliban, not Foggy Bottom.

Bidenflation is raging across the nation, exacerbated by supply chain blockages and malfunctions. The cost of food is soaring: ground beef up 10.6%, chicken up 17%, pork roasts and ribs up almost 20% and eggs up 12%. Bidenflation functions as a tax on the middle class and the poor. So much for Joe’s promise not to tax anyone who doesn’t make $400k a year.

After a meeting with the Taliban in Qatar, the Taliban said the U.S. was going to provide “humanitarian” aid to Afghanistan. It may be the State Department’s effort to pay ransom for U.S. citizens trapped there. The European Union will be paying a lot to the Taliban to supposedly help the Afghan people. Whether any of their money will be spent to benefit Afghans is problematic and quite unlikely.

Meanwhile, Biden lifted Trump-era sanctions on two Iranian companies involved in Iran’s ballistic missile program but that wasn’t enough to entice Iran back to the bargaining table. Joe still wants to revive the extremely dangerous 2015 Obama nuke weapons deal with Iran. It’s his worst idea, which is saying a lot.

Biden’s son, Hunter, is still reportedly trying to get rid of his 10% stock holding in a Chinese investment company that the U.S. has sanctioned. How hard can it be to dump some stock? The FBI is reportedly looking into a flow of money from Hunter to Joe.

Pelosi scolded the press for not doing a better job of selling Biden’s $3.5 trillion socialist spending bill. That’s no surprise because the Democrats see the media as their public relations firm, a fact the media confirms every day. The pressies tugged their forelocks and promised to do better.

John Zogby is the founder of the Zogby Poll and senior partner at John Zogby Strategies. His weekly podcast with son and partner Jeremy Zogby can be heard here. Follow him on Twitter @ZogbyStrategies

Jed Babbin is a Washington Examiner contributor and former deputy undersecretary of defense in the administration of former President George H.W. Bush. Follow him on Twitter @jedbabbin

Elizabeth Holmes admits whistleblower was right and reporter was ‘mishandled'

Is I'm a Celebrity back on ITV tonight?

Cenovus to sell some non-core assets for $660 million

The Big 12 doesn’t have to wait until Oklahoma and Texas are gone to experience something that hasn’t happened for a long time — a championship game without either of ... Read more »

Los Angeles Lakers star LeBron James has entered the NBA’s COVID-19 health and safety protocols and will miss Tuesday’s game against the Sacramento Kings, the team announced. It will be ... Read more »

A one-day event at this year’s Art Basel will focus on art made mostly out of Cheeto dust. This whole concept is dangerously cheesy. The internationally renowned showcase Art Basel ... Read more »

How Steve Burton Could Return To General Hospital

Kathy Hutchins/Shutterstock Most of Hollywood has taken a stand in favor of COVID-19 vaccine mandates, leading a handful of talented performers to pursue other opportunities that do not require vaccination. Last ... Read more »

Shops in San Francisco, CA are boarded up amid a spike in crime. JPMorgan insists it’s going ahead with an in-person conference in San Francisco in January, but alarm bells ... Read more »

‘Concerning' asteroid will break into Earth's orbit in a week: NASA

A gigantic 1,082 foot asteroid is set to approach Earth‘s orbit on December 11, according to NASA. Getty Images/Science Photo Libra NASA has warned that a giant asteroid bigger than ... Read more »

© Copyright 2021 The Associated Press. All rights reserved President Biden offered his sympathies to the community of Oxford, Michigan, where a school shooting occurred on Tuesday – Copyright 2021 ... Read more »

Emmerdale fans have been left fearing for Liv Dingle after tuning into the latest episode of the ITV soap. Tuesday’s instalment saw Liv (Isobel Steele) share her worries with Lydia ... Read more »

'I'm a single mum with two kids and I just bought my own house. Here's how.'

Larry Visoski saw many things from the cockpit of the “Lolita Express”. © Copyright 2021 The Associated Press. All rights reserved. Lawrence Paul Visoski Jr., who was one of Jeffrey ... Read more »

© Provided by Metro Adam Woodyatt opened up to his I’m A Celebrity campmates (Picture: ITV/REX/Shutterstock) EastEnders star Adam Woodyatt appears to have confirmed he won’t be returning to his ... Read more »

© Provided by dw.com Much remains unknown about the new variant, including whether it is more contagious, makes people more seriously ill, and whether it can thwart the vaccine The ... Read more »

(Reuters) – Salesforce.com Inc forecast current-quarter profit below Wall Street estimates on Tuesday as it faces stiff competition from rivals including Microsoft Corp, sending its shares down 6% in extended ... Read more »

© Provided by Daily Mail MailOnline logo Coleen Nolan has revealed she will spend Christmas Day with her former husband – and her new mystery boyfriend. The Loose Women presenter, ... Read more »

© Illustration by Alex Castro / The Verge Microsoft is tacking on a “buy now, pay later” extension to Edge that prompts users to use short-term financing service Zip (formerly ... Read more »

ANCHORAGE, Alaska (AP) — A holiday tradition in Alaska’s largest city for more than 60 years got off to a dim start this year. A 300-foot (91-meter) wide, brightly illuminated ... Read more »

Ghislaine Maxwell was in the room during Jeffrey Epstein abuse, says accuser in sex-trafficking trial

Witness “Jane” testifies during Ghislaine Maxwell‘s trial on charges of sex trafficking, in a courtroom sketch in New York – REUTERS/Jane Rosenberg The first accuser to take the stand in ... Read more »

Shawn Mendes pledges to 'shop vintage' to help the environment

Will There be a FIFA 22 FUT Freeze Promotion?

FUT Freeze is the annual winter-themed promotion in FIFA 22 that is usually held around the holiday season. According to EA Mobile, the promotion seems to be coming to the ... Read more »

© Provided by GamePur Saying Pokémon is a popular franchise is actually underselling how truly big the series is, so knowing that Pokémon Brilliant Diamond and Shining Pearl did well ... Read more »

Can you catch a shiny Reshiram in Pokémon Go?

© Provided by GamePur For a limited time, you’ll have the chance to encounter Reshiram in Pokémon Go raids. These five-star raids will put you and your Pokémon to the ... Read more »

How Canada changed its position on pandemic travel bans

How law enforcement is trying to stop mob retail thefts

With in-store customers expected to return in droves for the holiday shopping season, law enforcement agencies are moving to halt a wave of organized “smash-and-grab” crimes at retailers across the ... Read more »

EDMONTON — The head of Alberta’s police watchdog has resigned after seven years on the job. © Provided by The Canadian Press Justice Minister Kaycee Madu says Susan Hughson is ... Read more »

A federal appeals court in California on Tuesday upheld the state’s ban on high-capacity magazines, reversing a lower-court ruling in which a federal judge in San Diego compared an AR-15 ... Read more »

CNN said Tuesday that it has suspended Chris Cuomo “indefinitely” after new documents released this week indicated that the anchor was more intimately involved than previously known in helping his ... Read more »

Post-Covid-19 travel: Everything you need to know, from prices to tests

© Provided by PrestigeOnline After what feels like an eternity, travelling is back on the radar and here is everything you need to know about post-COVID-19 travel. Travel has been ... Read more »

Another shooting at a school has shattered a community, this time in Michigan, where a 15-year-old sophomore allegedly opened fire on Tuesday, killing three students and injuring seven others and ... Read more »

'Rust' armorer was 'very emotional' and 'agitated' after fatal shooting, according to newly released police report

I let my six-month-old baby be nocturnal, I won't force him to sleep no matter what trolls say

British armed forces to allow people with HIV to enlist

Government accused of ‘misconduct in public office' over pandemic handling