The holidays are the most wonderful time of the year, so you’ll need the most wonderful party games for the Nintendo Switch. We’ve got you covered as we highlight the essentials for your get-together later this year. Everyone will be stirring, even the mouse. 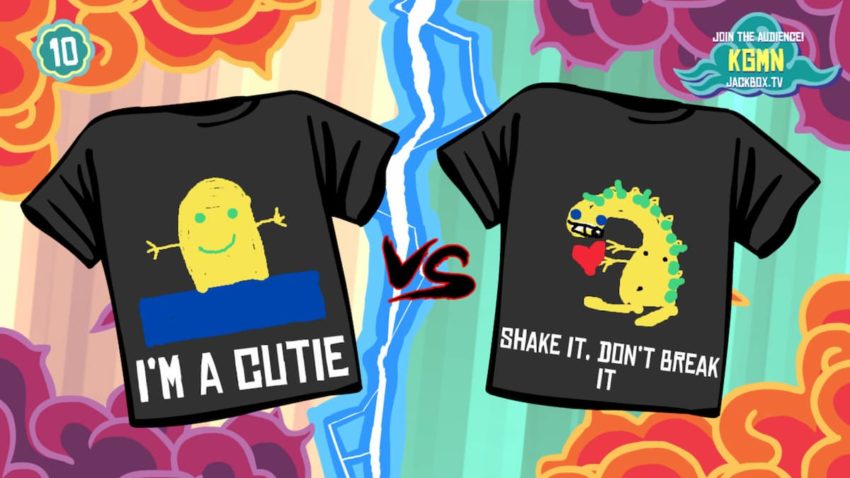 The Jackbox Party Pack games are always a sure-fire hit among friends and family during fun occasions throughout the year. With a device that everyone has, including the grandparents most likely, the phone, every family member or friend can join in on the fun. These packs have an immense amount of variety from word games, to trivia, to who’s the best artist, to even who’s the funniest out of your group.

Jackbox Games manages to change up the typical games everyone plays around the holidays and make them fresh again. For example, Drawful has you draw specific prompts to your phone and then everyone has to guess what it is. The twist to this Pictionary style classic is that you have to come up with convincing lies to the drawing that have been offered. If you fool your friends and family, you’ll get points for it. Meanwhile, another drawing game has you try to come up with the best shirt design, and at the end, you can actually order one for yourself. Do some research and pick up the best Jackbox Party Pack for you.

© Provided by GamePur Image via Ubisoft

This game has been a yearly tradition for many households around the world as dancing is the best way to get rid of those roast dinner calories. You may have an older version of the game but you should pick up this year’s iteration. It has a stellar list of songs that will appeal to many, like “Last Friday Night (T.G.I.F.)” by Katy Perry, “Funk” by Meghan Trainor, and “Mood” by 24kGoldn Ft. iann dior. It also has fantastic choreography and cinematics to boot. Most dances are easy to follow, but there are also songs for the intense players out there like “POP/STARS” by K/DA, Madison Beer, (G)I-DLE Ft. Jaira Burns. © Provided by GamePur Image via Nintendo

Mario Kart 8 Deluxe is the best-selling Nintendo Switch game for a reason as it provides gameplay that anyone can pick up and play alongside some stunning visuals. Each track is thrilling to explore and play on as they provide twists and turns to the Mario Kart formula. The orchestral soundtrack will also sweep you off your feet. All the DLC from the original Wii U release is in the game too, such as the tracks based on The Legend of Zelda, Splatoon, Splatoon, and F-Zero franchises. You can even play as Link, the Inklings, and Isabelle if you’d like. Just mind the blue shells while you’re in 1st place. © Provided by GamePur Screenshot by Gamepur

Ever wanted to go back in time and play the classic Mario Party games on the Nintendo 64? Well, many of those mini-games you know and love are back in this new iteration of the game. Some of the boards from the first few Mario Party games have been lovingly recreated for this experience, and with that HD Mario art style, they look amazing. In addition to its classic offline four-player, it also features full online support so you can play with your friends and family from around the world as well. 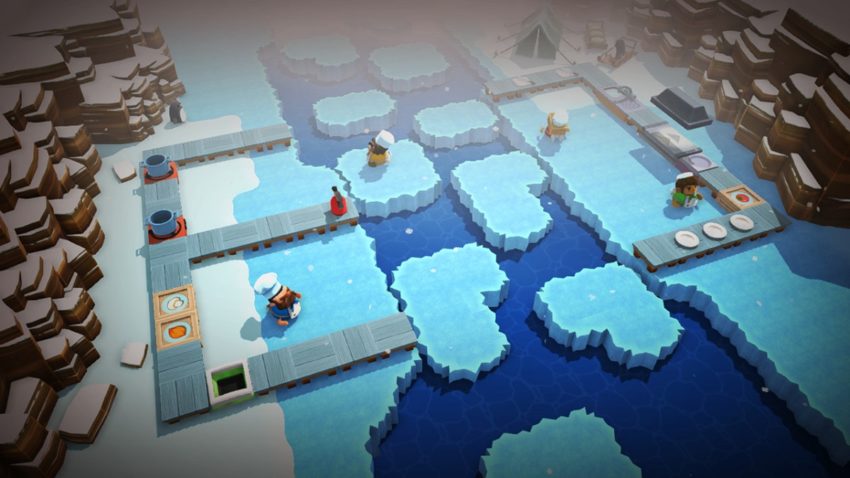 © Provided by GamePur Image via Team17

The Overcooked series is a great pick for your next meeting with friends and family as it requires you to work as a team. You are in a busy kitchen, trying to prepare meals and serve them to the guests of your restaurant. As a group, you have to coordinate who does what and communicate whenever a part of the meal is ready. It can be challenging, but once it all comes together, it feels amazing. Overcooked also switches up the formula with ever-changing levels like traversing through ice to reach from one place to another. It’s like Dinner Impossible and the whacky worlds of a Mario game had a baby.

© Provided by GamePur Image via 13AM Games

This underrated gem deserves some quality time during your parties. Oozing with colorful flair, Rainbow is a fast-paced platformer that will challenge you to get from one end of a challenging level to the other. It throws in all sorts of obstacles along the way as the level keeps throwing off your expectations. The energy is infectious as you pull off daring jumps to be the victor among your friends. While this is happening, hype-filled music by Dan Rodrigues and Dave Proctor pumps up the players.

Ultimate Chicken Horse is a hilarious platformer that has you try to make it to the end while encountering some ridiculous traps along the way. As each turn passes in this party game, you must set your own traps that you think you can get past while your opponent cannot. This can lead to some ridiculous situations. For example, you can set up a swinging saw but stick it to a conveyer belt with honey. This can be a hard obstacle to get around and by the end of the game, it can turn into absolute chaos. Plenty of laughs will be made throughout the house with this amusing blast of platforming fun.

We triple-dog-dare ya not to get excited about this. ET can confirm a sequel to A Christmas Story has received the green light at HBO Max. Legendary and Warner Bros. Pictures have ... Read more »

There is an element of ‘two passing ships’ about Manchester City’s failure to sign a striker last summer and the injury woes of young goalscoring prodigy Liam Delap. When Sergio ... Read more »

© (photo credit: Sruly Saftlas/CNW Group/Dirshu) The inauguration of the Congressional Caucus for the Advancement of Torah Values was attended by, from left to right, Rep. Kat Cammack; Rep. Don ... Read more »

The last time the state was anxious to write off a man who had struck at the heart of government was 1966 when communist Dimitri Tsafendas stabbed Prime Minister Hendrik ... Read more »

© Netflix Squid Game is back for more. Netflix is officially moving forward with a second season of its breakout survival drama of 2021, the streaming service’s co-CEO and chief content ... Read more »

The development in Cape Town will better represent the cultural significance of the Khoisan community, the developer and Western Cape province argued in court on Thursday. It was the second ... Read more »

© – A self-driving truck produced by Aurora is seen on a road in Texas A giant 18-wheel transport truck is barreling down a multi-lane Texas highway, and there is ... Read more »

The chief of staff for Virginia’s Loudoun County school district has been fired after a still-secret investigation into sexual assaults by a boy who was allowed to stay in classes, ... Read more »

He is in a blossoming, whirlwind relationship with actress Julia Fox. And Kanye West could not have looked any happier as he stepped out in Los Angeles on Thursday. The ... Read more »

Think about the long, long list of things you can buy on Amazon. Video games? Yep. Clothes? Absolutely. Electronics? Definitely! Laundry detergent? Sure thing. You can even buy a resort-style ... Read more »

Peter Isely, front, speaks to media about the systemic coverup that has prevented victims from getting justice from the Catholic Church. Sarah Pearson, back, holds the box containing the relevant ... Read more »

© Unsplash / Kinga Cichewicz This Counting Trick – No, It’s Not Sheep – Always Puts Me to Sleep If you’ve ever struggled to fall asleep, you’ve probably been told ... Read more »

The #Juanchoyce household apparently had a brush with COVID-19. In an Instagram post on Thursday, Joyce Pring revealed that her family just “weathered a bout with the ‘vid,” and that ... Read more »

© Provided by Daily Mail MailOnline logo Tom Burgess is set to marry his fiancée Tahlia Giumelli on Friday after months of pandemic postponements. But before saying ‘I do’, the NRL ... Read more »

DONALD Trump is rarely far away from the headlines but his sister Elizabeth is the polar opposite and shuns the limelight. Elizabeth Trump was spotted in June 2020 in the ... Read more »

As I sit writing this, it is 7°F—which, with the wind chill, feels like-12°F—in Minneapolis, Minnesota. So it’s safe to say that Minneapolis-based board-certified dermatologist Ronda Farah, MD, is a ... Read more »

© Provided by GamePur Valve’s Steam Deck is reportedly still on track for a February 2022 release, bringing handheld goodness to PC gamers everywhere. The company is currently in the ... Read more »

© Provided by Dot Esports Whether you’re a content creator or pro gamer, joining an organization can do wonders for your brand. While pro players will appreciate the stability they’ll ... Read more »

Michael Ninomiya confessed that he tried to kill his son in the icy water. Denver Police A Colorado father has been arrested for attempted murder after he allegedly tried to ... Read more »

© Sophie Jeong/CNN A staff member stands outside buildings of Hong Kong’s government quarantine center at Penny’s Bay. When I first stepped onto a plane departing from Hong Kong to ... Read more »

© Chip Somodevilla/Getty White House officials scrambled Thursday to clarify remarks made by President Joe Biden on the situation at the Ukrainian border. Officials made it clear that the president ... Read more »

“Ozark” is heading into the homestretch as the Byrdes take flight in the fourth and final season of the Netflix drama. “Every year we want our worlds to get bigger ... Read more »

David Walliams jumps onto the bonnet of Simon Cowell's Rolls-Royce

David Walliams jumped onto the bonnet of Simon Cowell‘s Rolls-Royce as they left Britain’s Got Talent auditions at the London Palladium on Thursday evening. The comedian, 50, who is known ... Read more »

Will The Conners Ever Change Up Its Opening Credits Like Roseanne? Here's What The Showrunner Told Us

Georgia pastor held eight disabled people in basement against their will: cops

The mystery behind the sound circle in Valorant revealed