The sheer brilliance of the goal prompted Pep Guardiola to burst out laughing.

And you know it must be something really special to provoke that sort of reaction from the Manchester City boss.

Bernardo Silva’s breakaway goal was magnificent, it was breathtaking and it sent out a clear message of intent from the reigning champions.

It is hard to imagine you will see a better goal from City this season, Silva is in the form of his life and, at times, their football was just a joy to watch.

Silva’s goal overshadowed Jack Grealish’s return to Villa Park and he has kept City’s £100m record signing in the shade for much of this season. 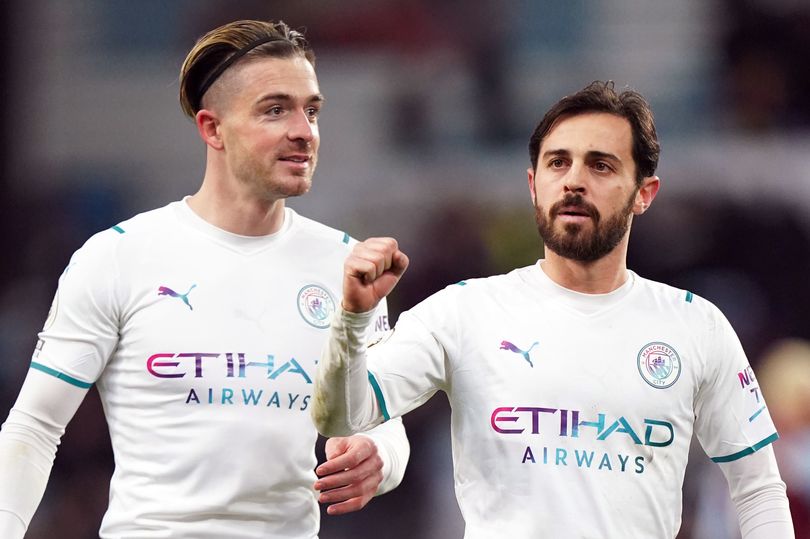 HAVE YOUR SAY! Where will Man City finish this season? Comment below

Grealish was only a late substitute, his introduction was met with more boos than cheers and yet he showed real class after the final whistle by walking round the pitch to clap the fans who then appreciated the gesture.

Villa fans appear to have moved on and their new boss Steven Gerrard did suffer his first defeat since taking charge but will take a lot from his team’s gutsy performance.

Ollie Watkins hauled Villa back into the contest at the start of the second half, they refused to give up and substitute Carney Chukwuemeka nearly grabbed a late equaliser but City keeper Ederson denied him with a super save.

Watkins was superb, took the charge to City and the visitors’ reaction at the final whistle told its own story as they celebrated with a mix of relief and jubilation.

It was a precious, important win to keep City second, a point behind leaders Chelsea and they will not face many more difficult away trips while Villa will be grateful they do not have to face Guardiola’s men every week.

City toyed with Villa early on and they deserved their lead when Ruben Dias put them after 27th minute. Raheem Sterling broke down the left, pulled back a low cross to Dias and his shot took a deflection off Leon Bailey which took the ball past Martinez.

Bailey’s night got worse as he limped off soon afterwards and was replaced by Ashley Young. And then it got even worse for Villa.

Silva’s goal deserves to be shown over and over again as a wonderful example of the genius of Guardiola. One moment Riyad Mahrez was playing head tennis with Fernandinho on the edge of his own box, the next they were breaking forward at lightning speed.

Fernandino’s pass released Gabriel Jesus down the right wing and you could see Silva racing forward on the opposite side. Silva did not break stride, he met Jesus’s inch perfect cross clean on the volley and it flew into the net.

It looked ominous for Villa. Better teams have buckled. But they came back barely and Watkins scored two minutes after the restart as he fired home Douglas Luiz’s corner at the near post.

It was a more even contest in the second half, Villa pushed and Chukwuemeka went close while Grealish’s late introduction was the sideshow. Ultimately, City deserved to hang on… but only just.

Oxfam: Billionaires added $5 trillion to their fortunes during the pandemic

Hotel that houses Channel migrants costing taxpayers £1.5m is EMPTY after being block-booked by Home Office

THE number of families in fuel poverty will soar by 200 per cent when the energy price cap goes up in April, a report predicts. About 6.3 million households will have ... Read more »

A hitman was hired to kill me at the height of my fame, reveals Robbie Williams

ROBBIE Williams has revealed a hitman was hired to kill him when he was at his most famous. The former Take That pin-up made the shocking revelation, admitting he has never told ... Read more »

© Charly Triballeau, AFP Equatorial Guinea inflicted a first defeat in 36 games on Algeria on Sunday to leave the reigning champions in serious danger of a group-stage exit from ... Read more »

A woman searching for the body of her murdered mother has lain flowers at the farm where she believes she is buried. © Sky Muriel McKay was kidnapped in December ... Read more »

Serie A leaders Inter Milan march on with draw against Atalanta

Inter Milan extended their lead at the top of Serie A with a 0-0 draw at Atalanta. The Nerazzurri have lost only once in the league this season but were ... Read more »

She may be a Grand Slam winner, but Emma Raducanu seems to have a talent for more than just tennis. Ahead of this week’s Australian Open in Melbourne, the British ... Read more »

The Chambers Dictionary (2014) is recommended. Special announcement We regret to announce that, until further notice, we are unable to offer prizes for solvers of the Azed weekly crosswords. The ... Read more »

Becky Hill plans a music festival for her wedding

The next instalment of the A Quiet Place franchise, which is not the next sequel after A Quiet Place: Part II but rather a spin-off of the series, is taking ... Read more »

Shilpa Shetty returns to the spot where she gave her first shot for debut film Baazigar, shares nostalgic post

© Provided by Pinkvilla Our firsts are always special. Be it the first plane you ride, your first job, or your love – each holds a special in your heart. ... Read more »

© Provided by Pinkvilla In the latest episode of Bigg Boss 15, it is seen that Shamita Shetty schools Nishant Bhat after he calls Raqesh Bapat a ‘difficult’ person. It ... Read more »

THE man who took hostages inside a Texas synagogue was reportedly in the country less than a month before he bought guns on the street and slept in homeless shelter. ... Read more »

A family’s outing to the iSimangaliso Wetland Park in KwaZulu-Natal turned into a nightmare when a bull elephant charged, battered and then overturned their vehicle at the weekend. © Copyright ... Read more »

TWO teenagers in Manchester have been arrested after a British hostage taker, Malik Faisal Akram, stormed a Texas synagogue. The teenagers are being held in connection with an attack where ... Read more »

Here's everything we know about the Steam Deck's specs

© Provided by Dot Esports Valve unveiled today its new portable gaming console, the Steam Deck, and while it has a similar look to a Switch or PlayStation Portable, it’s ... Read more »

DANCING on Ice's Liberty Poole stripped to her lace underwear while preparing for the ITV show. The Love Island star applied her fake tan in a video ahead of her ... Read more »

If the Giants knew for certain which of their nine candidates for general manager can identify a franchise quarterback, the search could be called off. Too bad it’s the trickiest ... Read more »

A juvenile was sent to a hospital Sunday afternoon after being shot in Raytown, according to police. Officers responded to a call of shots fired about 3:45 p.m. at a ... Read more »

Kelly Rizzo Mourns 'Sweet Husband' Bob Saget After His Funeral: 'How Lucky Was I'

© Provided by People Jason LaVeris/FilmMagic Kelly Rizzo is opening up about her late husband Bob Saget after laying him to rest Friday. Rizzo, 42, spoke out about her loss ... Read more »

Jonah Hill Makes It Very Clear He Has No Beef With Baby Yoda: We ‘Text at Least Once a Week'

© Provided by TheWrap Jonah Hill Baby Yoda Jonah Hill may not have cared much about watching “The Mandalorian” but make no mistake — he’s very good friends with Grogu ... Read more »

© Provided by The Times of India TNN Mumbai: The RBL Bank board has appointed Pradip Shah, chairman of National Asset Reconstruction Company (NARCL), as an external expert to work ... Read more »

© Provided by The Times of India TNN Mumbai: HDFC Bank, which reported a record net profit of Rs 10,342 crore for the quarter ended December 2021, has said that ... Read more »

Outlook 2022: Trends in the education landscape

© Provided by The Financial Express Thus, programmes on skilling, reskilling and upskilling are taking centre-stage to minimise the gap and align with industry demands, while promoting the ‘learn and ... Read more »

In UP, politics is second career for many bureaucrats, cops

India@2047: Govt's plan with focus on ease of living likely to be ready by May

© Provided by The Times of India NEW DELHI: Centre is readying an action plan for India@2047, when the country will complete 100 years of independence with 10 sectoral group ... Read more »

© Provided by The Times of India TNN Mumbai: Around 78% of bankers expect frauds to increase over the next two years because of the current business disruption due to ... Read more »

© Provided by The Times of India Mumbai: Banks are set to face a major challenge in finding talent to meet their digital ambitions. While banks have the resources to ... Read more »

Budget must give capex a boost

© Provided by The Financial Express New-project-starts in the December 2021 quarter, stood at Rs 1.9 lakh crore, more or less in line with the amounts seen in the previous ... Read more »

© Provided by The Times of India NEW DELHI: The National Highways Authority of India (NHAI) has invited bids from insurance companies for the roll-out of “cashless treatment” scheme for ... Read more »

© Bang Showbiz Farrah Abraham has been involved in an altercation Farrah Abraham was arrested on Saturday (15.01.22) for allegedly slapping a security guard. The 30-year-old star was at the ... Read more »

Akeem Williams found his way out of the handcuffs, fleeing the area. Paul Martinka A suspected carjacker who escaped from a Brooklyn hospital while in NYPD custody surrendered Saturday after ... Read more »

Ash from an erupted underwater volcano has made Tonga look “like a moonscape,” according to residents of the Pacific island. Particles emitted by the eruption of the Hunga-Tonga-Hunga-Ha’apai volcano – ... Read more »

UK counter-terrorism officers are working with authorities in the US after a British hostage-taker was shot dead after an hours-long stand-off at a synagogue. The man has been identified as ... Read more »

Walmart is getting serious about the metaverse

© Photo by Yichuan Cao / NurPhoto via Getty Images Walmart’s recent trademark applications suggest that it wants to break into the metaverse. Walmart appears to be getting ready for ... Read more »

Red Cross is asking for blood donations amid the omicron surge. Because I'm gay, I'm excluded.

Oxfam report: In 2021, income of 84% households fell, but number of billionaires grew

Why the Blue Jays shouldn't wait to extend Guerrero and Bichette

Stu Cowan: Canadiens and Coyotes in a battle for last place in NHL