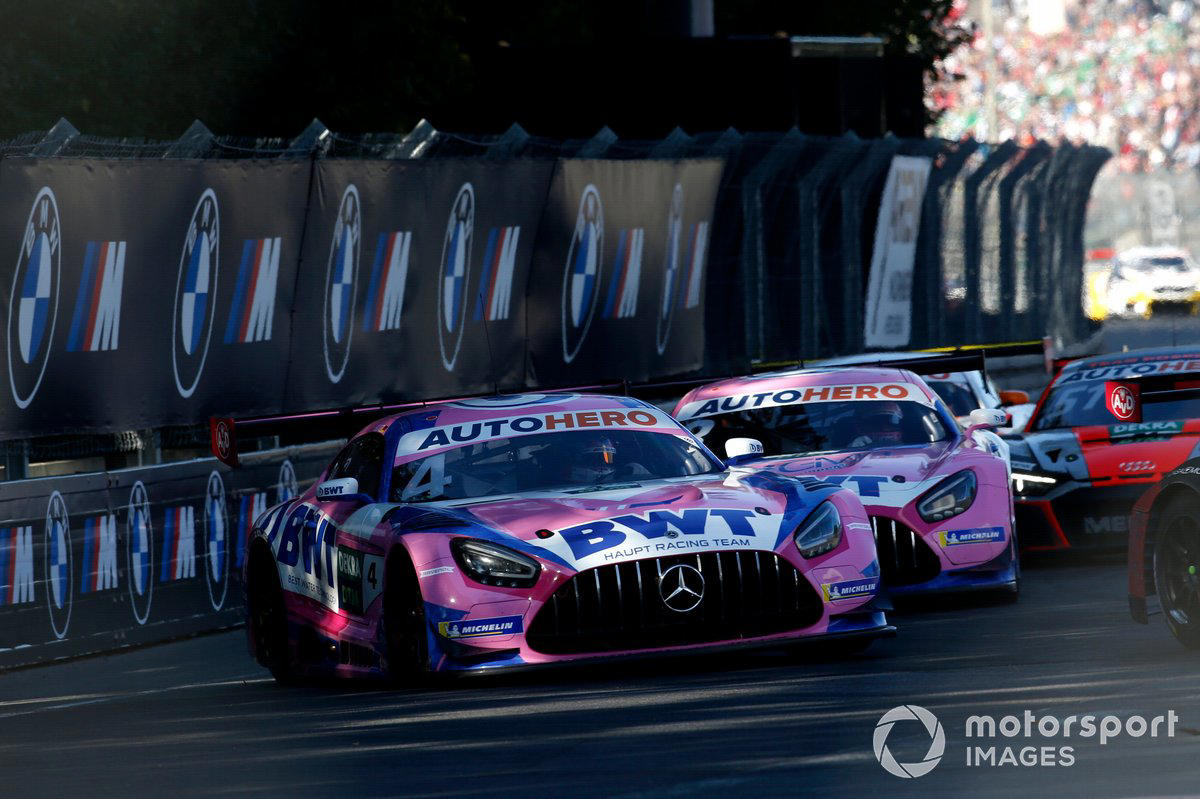 The DTM received widespread backlash from fans on social media last weekend, as questionable driving standards and flagrant team orders played a key role in deciding the outcome of the championship.

First, Audi’s Kelvin van der Linde left pre-race standings leader Liam Lawson with a severely damaged car with an overambitious move at Turn 2, even cutting the track when the Red Bull protege covered the inside line into the corner.

PLUS: How the DTM’s shambolic final poses awkward questions

Then, Mercedes asked both Lucas Auer and Philip Ellis to slow down in the closing laps to hand over the race lead to Maximilian Gotz, allowing the German driver to snatch the title by three points.

After watching the championship slip away from his driver’s fingers, AF Corse team boss Ron Riechert labelled the final Norisring race a “disgrace” for the DTM, while Lawson himself made it clear that he doesn’t want to return to the championship again next year.

Speaking to the Bild, Berger admitted that he wasn’t impressed by the events at the Norisring, acknowledging that the DTM failed to deliver a compelling title decider to its fans.

“I’ve been a motorsport fan through and through for 40 years and my sportsman’s heart can’t cope with such artificial changes of position.

“Both topics, the Mercedes team order and van der Linde’s manoeuvre, have not only triggered discussions, but have done damage to the DTM.

“I am incredibly sorry for all those involved who have contributed to the attractiveness of the DTM this season and who have done everything to ensure that the DTM stands for hard, fair racing up to the last race, where the best wins.

“Unfortunately, we didn’t manage to do that in the finale and it is a huge blow for us in the eyes of the fans.”

Team orders had been a mainstay in the DTM since the series was revived in 2000, but they were banned at the start of the 2020 season with the support of both Audi and BMW – the only two manufacturers to contest the final campaign of the series’ Class One rules cycle.

However, the rule regarding team orders was dropped from this year’s sporting regulations as it was felt that, with the DTM moving to a customer racing-focused formula, manufacturers wouldn’t be manipulating the results like in yesteryears.

Branding team orders as “unacceptable”, 10-time Formula 1 race winner Berger said he will evaluate his options to prevent an embarrassing repeat of the Norisring finale – but didn’t explicitly say if team orders will be outlawed again in 2022.

“If a driver makes a decision on his own initiative in the interest of the team, that’s fine. But that is also the limit,” he said.

“What is absolutely unacceptable, however, is when teams or drivers are ordered to give up their position in order to shift the advantage somewhere else.

“Of course, the issue is not new in sport.

“In Formula 1 in particular, there are many examples that are unacceptable from a sporting point of view, both from the fans’ and the other teams’ point of view.

“In our case, however, we are talking about a cross-team arrangement [between Winward and HRT].

“That is a completely different quality again, which I cannot accept either sportingly or personally on our platform.

“That means the issue is still on the table and I will personally fight for a solution. We’ll take a close look at the facts and then hopefully draw the right conclusions based on what we find out.

“It’s up to the fans to decide whether they see anything positive in such a move. As a sportsman, I certainly can’t, because there has been a dilution of the drivers’ title.”

Trio of Cowboys assistant coaches out due to COVID-19

© Please Greggs, help us out and bring back your cheese and bean bites. We miss them, writes Hayley Ma… I’m talking serious hankerings and cravings for a certain item. ... Read more »

© Provided by 702 Should South Africa’s Covid-19 scientists have disclosed the information about the new variant called B.1.1.529 so soon – or rather waited to be more certain of ... Read more »

Texas finally got back into the win column with a 22-17 win over Kansas State. It was a hard-fought game considering numerous key players were battling through significant injuries. Texas ... Read more »

Big changes are coming at Manchester United The sacking of manager Ole Gunnar Solskjaer appears set to trigger a new era at the club, with Ralf Rangnick the man expected ... Read more »

Soccer-All Whites still have work to do, says Hay after World Cup draw

The Open Thread/Daily Merengue is a place where you can discuss anything and everything related to football. Feel free to discuss the topics presented here, or start your very own ... Read more »

Even the refs couldn't stop the NFL from scoring monster ratings on Thanksgiving. Thursday's game between the Las Vegas Raiders and Dallas Cowboys was watched by an estimated 38.351 million ... Read more »

Arsenal fans may need to prepare for a quiet January transfer window as Mikel Arteta has suggested that he is finally happy with his team after their summer shake-up. The ... Read more »

Every Isithembiso fan can understand how disappointed they were when the program was canceled since they had all fallen in love with Simlindile, played by Nandi Mbatha. Of course, the ... Read more »

Anthony Edwards on Jimmy Butler going chest-to-chest with him: “That s*** be fake”

Late in the third quarter of the Timberwolves win over the Heat Wednesday night, Jimmy Butler and Anthony Edwards got chest to chest in a typical NBA scene: Two players ... Read more »

© Kim Klement-USA TODAY Sports Markelle Fultz says he feels good and is eager to return to the NBA court. Markelle Fultz and Jonathan Isaac are progressing toward a return ... Read more »

With just minutes remaining between UNC and NC State, Clemson football fans had to be thinking the Tigers could be ACC Championship Game bound. © Provided by Fansided Had you ... Read more »

The NC State Wolfpack looked finished against rival North Carolina on Friday night, but pulled off one of the most stunning comebacks of the season. © Rob Kinnan-USA TODAY Sports ... Read more »

The North Carolina Tar Heels are projected to face off against an SEC team this bowl season. Here’s who the Tar Heels might face in the Duke’s Mayo Bowl. © ... Read more »

This content is not available due to your privacy preferences.Update your settings here to see it. GP2 firmly believes he's not best dunker on Warriors roster originally appeared on NBC ... Read more »

Gary Payton II with a dunk vs the Philadelphia 76ers

© Provided by The South African Ralf Rangnick is poised to take over as interim manager of Premier League giants Manchester United, after his lawyer said on Friday the contract ... Read more »

Vikings' Everson Griffen on NFI list, out after scary incident at his home

The Minnesota Vikings sent defensive end Everson Griffen to the reserve/non-football illness list on Friday, meaning he will be sidelined for at least three games. Griffen was transported to a ... Read more »

© Provided by The South African We’ve got the latest news stories and headlines in South Africa on Saturday 26 November 2021. After news broke earlier this week that a ... Read more »

Bleacher Report lists three players the Lakers should trade for

The Los Angeles Lakers have started 10-10, which is far from what the team envisioned over the summer. Los Angeles has championship aspirations, but it has not resembled a championship-caliber ... Read more »

College football betting: No. 2 Ohio State getting 86% of the money vs. No. 5 Michigan

Is this how Hearts' 3-4-3 could be more dangerous - Josh Ginnelly, creating better chances and the elephant in the room

Jurgen Klopp knows what Ralf Rangnick can do for Manchester United

On this day in 2014: Australia batter Phillip Hughes dies at age of 25

Stephen Curry with a deep 3 vs the Portland Trail Blazers

Around the Big Ten: Do Lou Holtz, Mark May give Michigan a chance to upset Ohio State?