If you’re thinking of buying a Tee Higgins jersey, you might want to wait a year. The second-year Bengals wide receiver told reporters Thursday that he intends to switch from No. 85 to No. 5 after the 2021 season. The move will reunite Higgins with the number he wore in high school and college before entering the NFL, but as The Athletic’s Paul Dehner Jr. notes, it mostly stems from the young pass catcher’s desire to create a legacy separate from that of former Bengals star Chad Johnson. 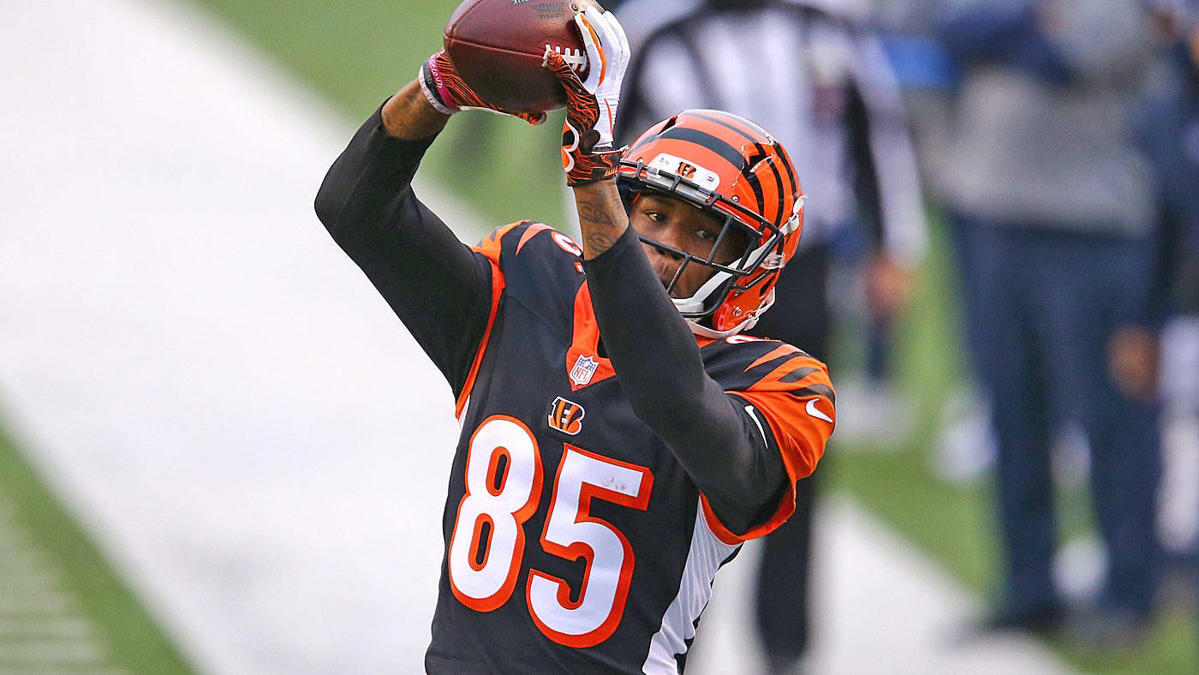 Johnson wore No. 85 for all of his 10 seasons in Cincinnati, where he logged six Pro Bowl appearances and more than 10,000 career receiving yards from 2001-2010. Of course, his big name became so synonymous with his jersey number that he also literally changed his name to Chad Ochocinco, which he held from 2008-2012, before reverting to Chad Johnson. Higgins took over No. 85 after entering as a second-round draft pick in 2020, attempting to incorporate his No. 5 from Clemson before the NFL loosened jersey restrictions to allow skill-position players to wear single digits.

“It’s not that big of a deal,” Higgins said Thursday. “I just feel like Chad has done so much for this organization. I just got a good feeling that his number is going to be lifted one day. I just want to make a name for myself. A lot of people keep saying on Twitter ‘Ochocinco 2.0.’ I don’t want to be a 2.0. No disrespect to Chad. He’s a great receiver. I just don’t want to be a 2.0 for myself. I want to be Tee Higgins 1.0 and No. 5 and make a name for myself for this organization.”

Higgins, for what it’s worth, is off to a decent start. The 22-year-old caught 67 passes for 908 yards and six touchdowns as a rookie, quickly establishing himself as a favorite target of quarterback Joe Burrow. On Sunday, kicking off his second season, he hauled in another four passes for 58 yards and a score, helping Cincinnati upset the Vikings.

Will Joe Burrow become a franchise QB in his second season in Cincinnati? Can Ja’Marr Chase live up to the hype? Download the CBS Sports app to see the latest news from our team of football experts, player projections, and more. If you already have the app, set the Bengals as your favorite team to get up-to-the-minute headlines.

A Florida school says vaccinated students must stay home for 30 days after each shot, citing a false claim that they'll infect others

Apex Legends developer Respawn has acknowledged Wattson’s long-running bugs and shared that the company is working on a fix. © Provided by Dot Esports As reported by Dexerto, Wattson picked ... Read more »

Listen to Jack White's New Song “Taking Me Back”

When Is Adele's 'One Night Only' CBS Special? Date and Full Details Revealed

Adele, the multi-Grammy Award winning artist, will be marking the release of her new album 30 with a prime-time special program on CBS next month. © Axelle/Bauer-Griffin/FilmMagic Adele seen at ... Read more »

Heavy metal icon Rob Halford had kept his prostate cancer diagnosis and extensive treatment a private matter after first beginning care in the spring of 2020 but has revealed the ... Read more »

Jesse Puljujärvi’s first few seasons with the Oilers didn’t go as planned. He was disappointing on the ice and the team was disappointed in the No. 4 overall pick from ... Read more »

© Raoul Gatchalian/starmaxinc.com/AP. Gwen Stefani and Blake Shelton are still in the blissful stages of marriage as newlyweds, but that doesn’t mean they can’t celebrate the anniversary of their engagement. ... Read more »

On Friday of last week, the family of Jimmy Hayes learned that the 31-year-old former NHL player died with fentanyl and cocaine in his system. © Provided by For The ... Read more »

Michaela Onyenwere: ‘I ❤ New York' so ‘Don't count us out'

Michaela Onyenwere was the WNBA’s unlikely Rookie of the Year. It was particularly rewarding when you consider she was taken sixth in the league Draft after the Liberty gave up ... Read more »

An anti-Joe Biden chant that turned into a meme among Republicans has now stemmed one of the hottest songs in the country. “Let’s Go Brandon” appears to have innocent intentions, ... Read more »

© Provided by US Weekly NHL Veteran Jimmy Hayes Dies Suddenly at Age 31 Update on October 18, 2021: The medical examiner listed his cause of death as “acute intoxication ... Read more »

Diana Taurasi, Skylar Diggins-Smith, Brittney Griner & Co. had an abrupt ending to their second-half WNBA run. Just over an hour after the Mercury lost Game 4, 80–74, to the ... Read more »

After a record-breaking weekend, Adele is sitting down with Oprah

After the release of her first new song in years, “Easy On Me,” and a new album, 30, releasing November 19, Adele is sharing more good news surrounding new music. ... Read more »

New exhibit opens at the Philbrook Museum of Art

A new exhibit has opened at the Philbrook Museum of Art. The Transcendental Painting Group features the work of 11 different artists who gathered in the late 1930′s to create ... Read more »

‘I like your thinking', ‘Loans for the future?' – Plenty of QPR fans react to Amit Bhatia's message to Newcastle figure

The pandemic has shone a light on a problem of immense proportions that needs an urgent fix: Our crumbling school infrastructure. © Greg Nash Construction workers attend to Oakton High ... Read more »

By Alan Baldwin © Reuters/Jerome Miron FILE PHOTO: IndyCar: Xpel 375 WOKING, England (Reuters) – Pato O’Ward jokes that he would be a billionaire if he had banked a penny ... Read more »

Sevilla defender Jules Kounde was linked with a move to Chelsea for the entirety of the last transfer window – but has reportedly asked his agent to open talks with ... Read more »

© Provided by Football FanCast jesus After securing a 2-0 win over Burnley in their latest Premier League outing, Manchester City are back in European action on Tuesday evening with ... Read more »

© Provided by Football League World Joe Morrell Ipswich Town made a mammoth 19 new additions to their senior squad over the course of the summer in Paul Cook’s big ... Read more »

Jack Ross said after the game that the early part of this week would be spent working out the answers as to why his side had been “lazy, slow, and ... Read more »

'Still not over it', 'Gets better every time' - Many SAFC fans wowed by 'outstanding' footage

A whole host of Sunderland fans are delighted on Twitter with the latest club video to emerge of Ron-Thorben Hoffmann. © Provided by This is Futbol Sunderland fans The Black ... Read more »

© Provided by NBC Sports In less than three weeks, Kyle Larson will race for the NASCAR Cup Series championship. He earned that shot by winning Sunday’s Round of 8 ... Read more »

‘She Spanks Them with a Belt': Police Say 2-Year-Old Victim's Brother Told Them Grandma Played Role in Fatal Abuse

Colin Powell: Remembering the man and his love for America