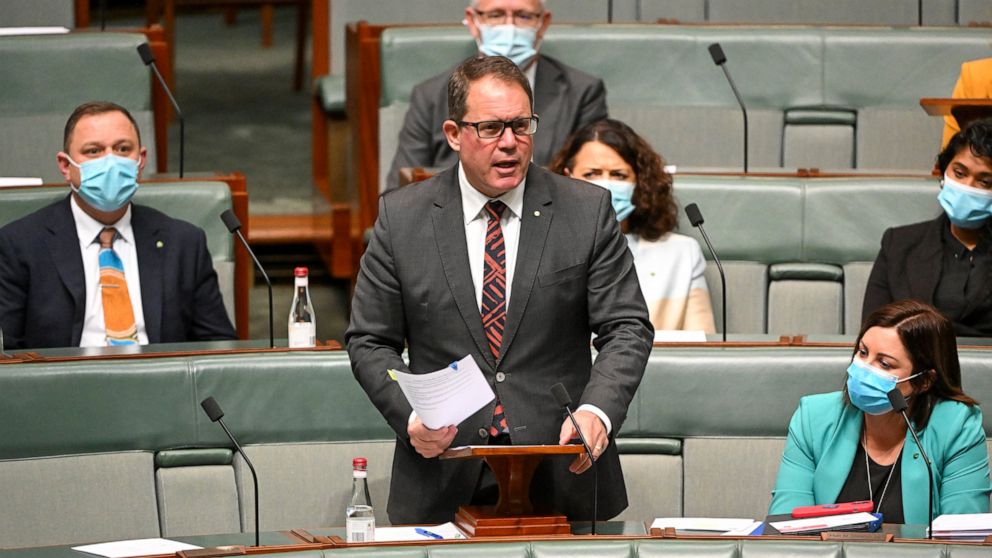 Labor member for Solomon, Luke Gosling introduces the Restoring Territory Rights Bill in the House of Representatives at Parliament House in Canberra, Australia, Monday, Aug. 1, 2022. The Australian Parliament is considering a bill that would lift a 25-year-old ban on two territories legalizing voluntary euthanasia. (Mick Tsikas/AAP Image via AP) The Associated Press

CANBERRA, Australia — A new bill was introduced in the Australian Parliament on Monday seeking to lift a 25-year ban on doctor-assisted suicide in two territories.

Australia’s sparsely populated Northern Territory in 1995 became the first place in the world to legalize voluntary euthanasia. But the landmark law was overturned by the Australian Parliament two years later after four terminally ill people had been legally helped to die, leaving the Northern Territory one of last parts of Australia where doctor-assisted suicide remains banned.

“For too long Australians living in the territories have been treated as second-class citizens,” government lawmaker Luke Gosling, who represents a Northern Territory electorate, told Parliament.

He and fellow legislator Alicia Payne introduced a bill to the House of Representatives that would allow the legislatures of the Northern Territory and Australian Capital Territory to legalize assisted dying.

The two territories do not have the same legal rights as the six states, that have each legislated euthanasia laws in recent years.

The Australian Parliament does not have the same constitutional power to overturn state laws as it does territory laws. The two territories account for fewer than 1 million of Australia’s population of 26 million people.

Payne, who represents an electorate in the Australian Capital Territory, which comprises Canberra and two villages, described her bill as urgent. She described mercy killing of the terminally ill an “incredibly important debate that we are not allowed to have simply because of where we live.”

Since then, Victoria became the first state to legalize assisted suicide in June 2019, and New South Wales in May this year became the last state to pass its own euthanasia laws.

The center-left Labor Party federal government, that was elected in May, has announced it will allow its lawmakers to vote on the bill according to their consciences rather than adopt a party line.

The Catholic Church is lobbying federal lawmakers to vote against the bill.

The Ending Of The Greatest Beer Run Ever Explained

The neighbor typed the letter out in red ink, calling the host of the party a “dismissive and disrespectful” person. The host of an apparently rowdy 21st birthday party has ... Read more »

The Toronto Blue Jays will play host to a best-of-three, wild-card playoff series starting on Friday at the Rogers Centre. The Jays defeated the Baltimore Orioles 5-1 in a rain-shortened ... Read more »

The Toronto Blue Jays have clinched the top wild-card seed in the American League and will play their first-round series at Rogers Centre starting Friday. The Blue Jays locked up ... Read more »

Dylan Holloway continued to impress for the Edmonton Oilers, netting a hat trick and picking up an assist in a 7-2 pre-season win over the Vancouver Canucks Monday night at ... Read more »

ARLINGTON, Texas — With three games remaining in the regular season, the Yankees still have plenty of issues to work out in their bullpen. Miguel Castro came off the injured ... Read more »

Ron DeSantis on the media politicizing Hurricane Ian: Floridians are 'really sick of the nonsense'

Florida Gov. Ron DeSantis responded to comments from Vice President Kamala Harris and the politicization from the mainstream media over Hurricane Ian on “Hannity.” RON DESANTIS: I think she [Kamala ... Read more »

Texas: Woman convicted of killing 21-year-old mother-to-be and cutting baby from her womb

Prosecutors told the court that Reagan Michelle Simmons-Hancock was beaten in the head at least five times with such force that the blows compressed her skull. Read more »

A pedestrian was killed by a freight train south of downtown Los Angeles on Monday night. The crash was reported at 7:46 p.m. in the 2100 block of South Santa ... Read more »

Captain Ibrahim Traoré, leader of Friday’s coup d’état in Burkina Faso, said Monday that “Russia is a state like any other” in the face of speculation that Moscow was mainly ... Read more »

PHS Automotive Malaysia (PHSAM), the official distributor of Audi in Malaysia, has launched its new #ReadyToDrive customer care initiative. It is the first aftersales initiative by PHSAM since representing the ... Read more »

While Aaron Judge is down to three more games to try to get his 62nd home run for the New York Yankees, Luis Severino was nearly perfect in a promising ... Read more »

The Georgia Republican vehemently denied a report by The Daily Beast saying he conceived a child with a woman he was dating and paid for her to get an abortion. NBC News has not yet verified the woman’s allegations or independently reviewed the documents Read more »

Starling Marte attempted to hit short soft toss with two hands, but the drill didn’t go well for the outfielder, according to manager Buck Showalter. Marte, who has missed the ... Read more »

To inspire you to get away this season, discover 5 of the coziest luxury hotels on the East Coast that are idyllic for viewing Fall foliage. Plus, learn about the ... Read more »

Why Lisa From Last Seen Alive Looks So Familiar

Dia Dipasupil/Getty Images Among one of the more popular movies in 2022 is the mystery thriller “Last Seen Alive.” Directed by Brian Goodman and written by Marc Frydman, who previously ... Read more »

‘Too Good': Youth Football Team With Perfect Record Kicked Out of Playoffs

Link video: http://nbclim-download.edgesuite.net/Prod/NBCU_LM_VMS_-_KXAS/38/839/Youth_Football_Controversy_10P__818603.mp4 NBCUniversal, Inc. A football team of 7-year-olds and 8-year-olds with a perfect record was kicked out of the playoffs for being “too good,” league officials say. The ... Read more »

The Onion and the Supreme Court. Not a parody

The Onion and the Supreme Court. Not a parody The satirical site The Onion has some serious things to say in defense of parody FILE – The U.S. Supreme Court ... Read more »

NFL News: Steelers move on from Mitch Trubisky to a QB with a worse rating

NFL News: Steelers move on from Mitch Trubisky to a QB with a worse rating The Steelers haven’t found the best replacement for Ben Roethlisberger. Despite they selected Mitch Trubisky ... Read more »

Rams-49ers final score: That was even worse than the loss to the Bills

Rams-49ers final score: That was even worse than the loss to the Bills Monday Night Football’s 24-9 loss to the San Francisco 49ers brought back all the memories of how ... Read more »

It was an uncomfortable look for Jaylon Johnson. The Bears cornerback joined 670 The Score’s “Parkins & Spiegel Show” and made good on a bet he made with Canadian soccer ... Read more »

nurse reaching out to senior woman Sometimes numbers tell the story best. Each year, more than 53 million family caregivers provide the majority of support that makes it possible for ... Read more »

As Floridians begin to rebuild their communities, residents around Florida have made it clear they will protect what property they have left following the aftermath of Hurricane Ian. Getty Images ... Read more »

It’s an old idea: Give families a choice in where their children attend school and students will receive a better education. Not all schools are a good fit for all kids ... Read more »

The Jets will see an old friend at quarterback Sunday. Dolphins coach Mike McDaniel announced Monday that Teddy Bridgewater will start for Miami on Sunday against the Jets with Tua ... Read more »

CDC drops COVID-19 traveler health notices for individual countries ASSOCIATED PRESS WASHINGTON — The federal government is scrapping another of its responses to the pandemic. On Monday, the U.S. Centers ... Read more »

hurricane ian Hurricane Ian has displaced tens of thousands, including many who grew up in Cincinnati, but now live in Fort Myers. “Everything I own is in that SUV,” said ... Read more »

Man stands trial for rape in Australian Parliament House A judge reminded potential jurors of the importance of impartiality at the rape trial of a former Australian government staffer Bruce ... Read more »

Jan. 6 Committee says John Eastman may have made bogus privilege claims and asks judge to review

By Sarah K. Burris John Eastman (Photo by Alex Wong/Getty Images) The House Select Committee investigating the Jan. 6 attack on Congress wants a judge to do a review of ... Read more »

Examining both ways to look at Mets’ debacle against Braves

We’re going to divide the column in half today, dear reader, so be prepared. Up first: The Glass Half Empty Look, it is useless to sugarcoat the amount of damage ... Read more »

ARLINGTON — Aaron Judge watched in the background. Giancarlo Stanton blistered his 30th home run of the season Monday night to help the Yankees to a 3-1 win over the ... Read more »

Debbie Collier murder: Who is trucker mentioned in 911 call?

Debbie Collier was involved in an accident with a truck driver that pleaded for her not to involve the cops due to them being out on parole. Facebook/Tammy Doty More ... Read more »

Digi Postpaid Infinite plans are back, free iPad from Postpaid Family Unlimited plan and many more

In another round of Juara Internet Untuk Semua by Digi, this new campaign is available for all new and current Digi customers to enjoy exciting offers. From free devices to ... Read more »

FBI: We tracked who was printing secret documents to unmask ex-NSA suspect

NBA Stars Returning in Preseason After Missing All of 2021-22

Your Stories: Some Amazon customers aren't receiving their orders

Rapper Accused Of Crashing Into Pregnant Woman And Leaving The Scene

Do You Need To See Rogue One: A Star Wars Story Before Watching Andor?