Three Royal Australian Navy air crew have been rescued after their helicopter was forced to ditch into the Philippine Sea overnight.

The Defence Department said the MH-60R Seahawk helicopter was operating from the warship HMAS Brisbane on regional military exercises when it made an emergency landing in the water. 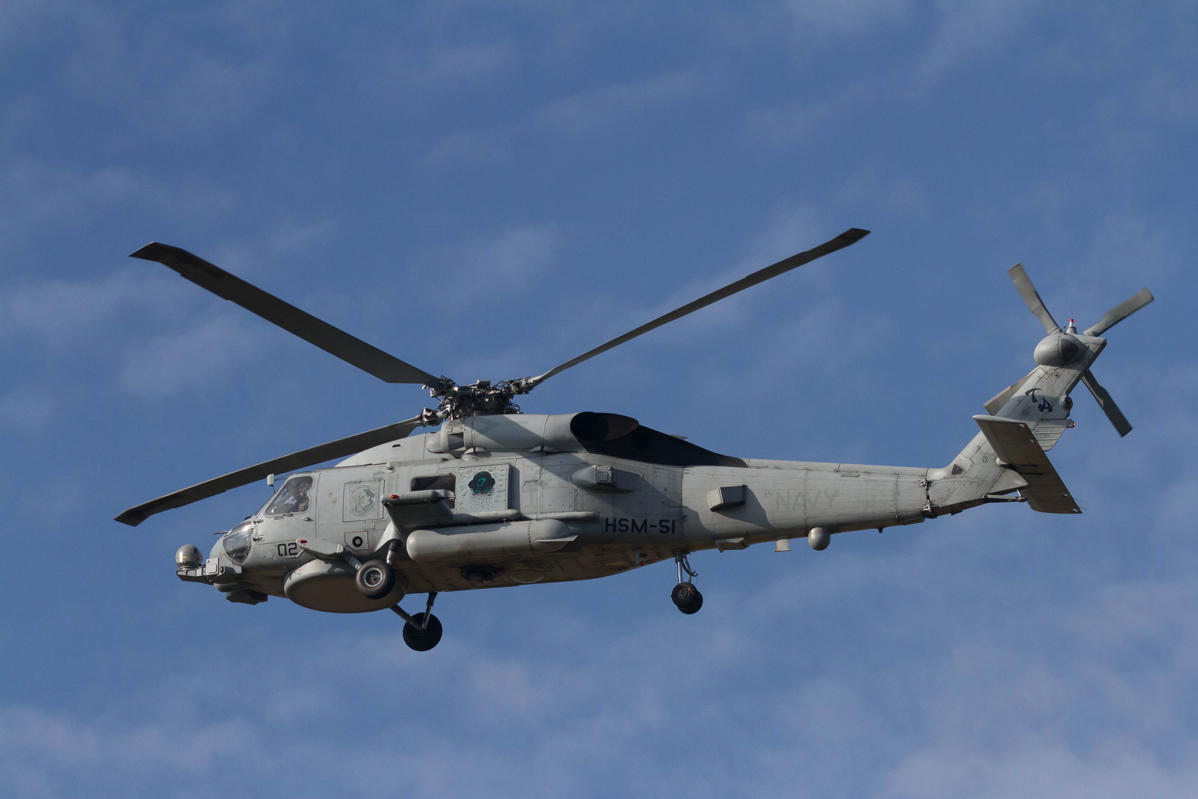 The air crew received first aid for minor injuries upon their return to the warship.

“The successful rescue is credit to the devotion to duty and skill of the officers and sailors of HMAS Brisbane,” Rear Admiral Hammond said.

“Their immediate actions ensured the survival of the aircrew, validating the significant training undertaken in the event an emergency of this nature occurs.”

HMAS Brisbane and another Australian vessel HMAS Warramunga continue to search the area for any debris of the aircraft, Rear Admiral Hammond said.

Both warships had been taking part in regional military exercises.

Rear Admiral Hammond said as a precaution, the RAN has temporarily halted flying of its MH-60R Seahawk fleet.

8-storey police building in Bengaluru tilts due to wide crack, families to be evacuated

Gal Gadot Is Returning As Wonder Women For The Third Time

So much LOVE! Forest officer gets a hug from baby elephant, viral photo wins hearts online

Will I be cut off if my energy supplier collapses? Expert answers your questions

If you’ve glanced at the news recently, it’s hard not to worry about energy bills and firms going bust. There are a lot of unknowns still with this story, like ... Read more »

© Provided by This is Futbol Deeney Troy Deeney would have been a great acquisition for West Brom, claims former Baggies midfielder Carlton Palmer. The 33-year-old left Watford for Birmingham ... Read more »

Celebrity Birthdays for Oct. 17:   Actress Marsha Hunt, one of the last surviving actors from the Golden Age of Hollywood, is 104. Singer Jim Seals of Seals and Crofts is ... Read more »

© Marwan Ali Sudanese protesters take part in a rally demanding the dissolution of the transitional government, outside the presidential palace in Khartoum. AP Thousands of pro-military protesters have vowed ... Read more »

Sir David Amess fatal stabbing: What we know so far

Conservative MP Sir David Amess has died after being stabbed multiple times at a constituency surgery. Here is what we know so far: What happened? – The Southend West MP ... Read more »

Cynthia Smith McCollum, who oversees two private child care centers in Austin, Texas, is sure that requiring her staff to get vaccinated was the right choice, even though it meant ... Read more »

Salah, Messi, Neymar - who is the best player in the world? Vote now!

Haiti: 17 US missionaries and families kidnapped in Port-au-Prince

© CHANDAN KHANNA A deserted road in downtown in Port-au-Prince. Photo: AFP As many as 17 American Christian missionaries and their family members have been kidnapped by gang members in ... Read more »

© Motivate Publishing Xiaomi 11 Lite 5G Hands on review Xiaomi is gradually raising the bar when it comes to smartphone designs and performance. Recently, it launched the Xiaomi 11 ... Read more »

© Motivate Publishing Anantara The Palm Dubai main Sponsored: The original is ranked as one of Asia’s Best 50 Restaurants… If you’ve ever visited Colombo, chances are you’ve heard of, ... Read more »

A Texas deputy who was fatally shot outside a Houston bar had just returned from paternity leave, an official said. © Harris County Precinct 4 Deputy Kareen Atkins, one of ... Read more »

Sri Lanka has sought a USD 500 million credit line from India to pay for its crude oil purchases amid a severe foreign exchange crisis in the island nation. The ... Read more »

Researchers at different Indian Institutes of Technology (IITs) are working on development of a first-of-its kind “smart speed warning system” for vehicles which will alert the driver on the basis ... Read more »

Chris Evans praised for honest post about anxiety Hollywood star Chris Evans is being praised by fans for a frank post about his struggle with anxiety. On Friday evening (15 ... Read more »

Grizzlies pick up team options on Ja Morant, two others

TNT, San Miguel slug it out in knockout match for finals seat

© Provided by SPIN.ph TNT and San Miguel face off one last time in the 2021 PBA Philippine Cup semifinals on Sunday at the Don Honorio Ventura State University gym in ... Read more »

Cleaning guru Aggie MacKenzie tells ME & MY MONEY she made £440,000 from TV work in one year, but didn't deserve it

© Provided by This Is Money ( The best financial decision Aggie MacKenzie ever made was giving up her job at the Good Housekeeping Institute to present Channel 4 TV ... Read more »

'Boss stopped me seeing my sick child - so I quit and launched £1.5m business from home'

The path to success was far from easy for Tayo. Here, the 33-year-old from Leeds, who lives with husband Ola, 36, an engineer, and daughters Tiana, five, and Maya, two, ... Read more »

Political debate has coarsened. We MPs can take the lead in restoring calm and respect

© Provided by The Guardian Photograph: Henry Nicholls/Reuters The feelings are so visceral. Sir David Amess’s family are the first and last thought. I cannot imagine what this is like ... Read more »

Delhi-NCR air quality slips to ‘very poor’, AQI crosses 300 The air quality in Delhi plunged into the ‘very poor’ category on Sunday at 9:51am, with the overall Air Quality ... Read more »

One in ten homeowners have struggled meeting their mortgage repayments over the past year, according to government figures. The government’s Household Resilience Study said this has more than doubled from ... Read more »

Fernando Alonso has named the two drivers who he says were the reason he continued to watch F1 while he was taking a break from competing in the sport. The ... Read more »

Gladys Berejiklian will be investigated by ICAC tomorrow. Here's everything you need to know.

Emma Raducanu took to social media to respond to parents who named their newborn daughter after the Brit following her US Open heroics. Raducanu incredibly won the Flushing Meadows tournament ... Read more »

Photograph: Andrew Gombert/EPA Yasir al-Rumayyan, the new non-executive chairman of Newcastle United, was involved in a controversial “anti-corruption” campaign in Saudi Arabia that included the transfer of assets on behalf ... Read more »

Spies next door? The suburban US couple accused of espionage

When accused spies Jonathan and Diana Toebbe were escorted into a West Virginia court to be arraigned on espionage charges, they looked as any middle-aged, suburban couple might: struck by ... Read more »

Photograph: Bryan Anderson/AP A top Republican politician in North Carolina is facing a wave of outrage and backlash, including calls for resignation, from elected officials and various human rights groups ... Read more »

© Provided by Times Live Almost a year ago, Shudufhadzo Musida was the newly crowned Miss SA, and still pondering the challenges that Covid-19 would bring to her role. “I ... Read more »

Czech car sector to make 250,000 fewer vehicles this year due to chip shortage

Non-Sarawakians still need to go through EnterSarawak to enter state

Suez taught us our future lay in Europe. So will Brexit

Nationals not in a rush on climate deal

Upgrade to Windows 11? Here's How You Can Check Whether Your PC is Compatible