Australia’s central bank has boosted its benchmark interest rate for a sixth consecutive month to a nine-year high of 2.6% 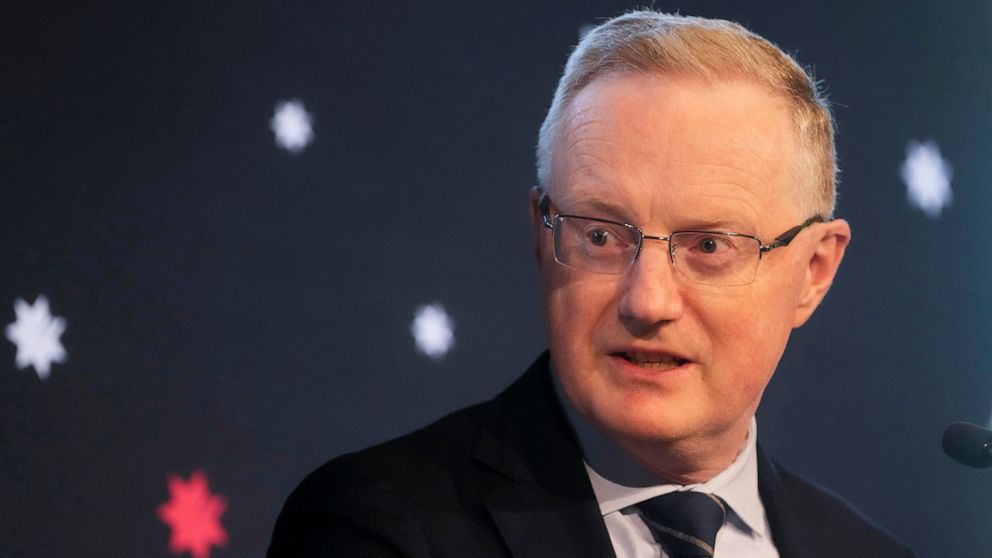 CANBERRA, Australia — Australia’s central bank on Tuesday boosted its benchmark interest rate for a sixth consecutive month to a nine-year high of 2.6%.

The Reserve Bank of Australia’s increase of a quarter percentage point to the cash rate was smaller than those at recent monthly meetings.

The banks had hiked the rate by half a percentage point at the last four meetings. Most economists had expected another 0.5% rise.

When the bank lifted the rate by a quarter percentage point at its board meeting in May, it was the first rate hike in more than 11 years. It’s now at its highest point since August 2013, when the bank cut the rate from 2.75% to 2.5%.

Reserve Bank Gov. Philip Lowe said the smaller rise reflected that fact that the “cash rate has been increased substantially in a short period of time.”

“The size and timing of future interest rate increases will continue to be determined by the incoming data and the board’s assessment of the outlook for inflation and the labor market,” Lowe said in a statement.

The board lifts interest rates in an attempt to reduce inflation to a target band of 2% to 3%. Australian inflation is running at 6.1% and the Treasury Department expects it to peak at 7.75% in the December quarter. Unemployment is at a near 50-year low of 3.5%.

“The board remains resolute in its determination to return inflation to target and will do what is necessary to achieve that,” Lowe said.

The rate increase is the last before Treasurer Jim Chalmers outlines his economic blueprint for government spending on Oct. 25.

His center-left Labor Party was elected to power in May after nine years in opposition.

“When it comes to some of these major economies, the likelihood of recession has tipped over from possible to probable and some of these big economies which are very important to us,” Chalmers told reporters.

“We wouldn’t be spared completely a downturn of the U.S. or global economy for obvious reasons. I think one of the biggest things that has changed in the last month or two is the way that our expectations for the global economy have deteriorated so substantially,” Chalmers added.

He said Australia had much higher levels of debt compared to incomes than in the mid-nineties, meaning households are much more sensitive to rate hikes.

Thomas Müller: “I feel that some people are happy when we don’t do well”

The Ending Of Pearl Explained

Letters to the Editor: Don’t think there’s a housing crisis? Look at the UC strike

Op-Ed: The first prisoners arrived at Guantanamo Bay 20 years ago. Will it ever close?

Chicago Weather: Wednesday to See Strong Winds, Temperatures That Will Feel Like the Teens

Best desk chairs 2022: leading office chair deals to help with back support that will look stylish in the home

Life sentence for poacher who killed German police officers A court in western Germany convicted a 39-year-old man of murder Wednesday in the shooting deaths of two police officers who ... Read more »

Crunch time: UN puts baguette on cultural heritage list The humble French baguette is being inscribed on the U.N.’s list of intangible heritage as a prized tradition and savoir-faire that ... Read more »

Here's Who (Besides Jason Momoa) Should Play Lobo In The DCU

Column: The late Irene Cara and ‘Fame’ were so much more than a fad

I’m far from a vinyl expert, but I do have a collection that’s mostly for nostalgia. One album that’s far more is the soundtrack to the movie “Fame,” a high ... Read more »

Letters to the Editor: Parents, don’t surrender to screens in every classroom

To the editor: Paul Thornton writes, “A screen for every child, even little ones, was a terrible idea until it wasn’t.” (“A ‘no screens’ parenting style can’t exist in a ... Read more »

Letters to the Editor: A response to out-of-state conservatives who insist L.A. is failing

To the editor: What is one letter writer talking about when he advises voters in California to “stop rewarding failure as your state continues its decline”? My cousin in Idaho ... Read more »

Letters to the Editor: We grow rice in California? That’s unwise even when there isn’t a drought

To the editor: I read your front-page article about how the third year of drought is impacting farmers. With diminished water flowing from rivers, farmers have increasingly resorted to groundwater ... Read more »

The United Nations climate summit in Egypt this month broke ground with a new agreement to compensate poor nations for the effects of global warming. The creation of a loss ... Read more »

To people of color in the United States, the death of Anastasio Hernández-Rojas — a brutal killing at the hands of U.S. government officials followed by impunity — is all ... Read more »

Tornadoes, Hail, and Damaging Winds Reported as Major Storms Sweep Across the South

Heavy rain and hail as big as tennis balls were also possible as forecasters said the weather outbreak was expected to continue into Wednesday. Read more »

The company said a new page on its site will list so-called Airbnb-friendly buildings that let tenants host their apartments just as homeowners do. Typically, rental buildings prohibit tenants from ... Read more »

What did John Nicolson MP do? Why SNP politician faces probe for Lindsay Hoyle and Nadine Dorries intervention

SNP MP John Nicolson is after releasing details of private correspondence he had with House of Commons speaker Lindsay Hoyle. The Scottish politician – a former BBC journalist – had ... Read more »

With a week to go before homeless residents have to leave a Toronto hotel-turned-shelter, some say they don’t know where they’ll end up once they have to move out while ... Read more »

“Racial imposter syndrome” is definitely “a thing,” for many people. Shereen and Gene hear from biracial and multi-ethnic listeners who connect with feeling “fake” or inauthentic in some part of ... Read more »

Rep. Hakeem Jeffries, D-N.Y., ran unopposed for the position of House Democratic leader. He replaces Rep. Nancy Pelosi, D-Calif., who announced she would not run for the top leadership post ... Read more »

Why you should think twice before booking the Maldives

Planet Sport's tipsters hone in on four tracks around the United Kingdom for Thursday's racing action with top picks from Wincanton. Read more »

King Charles III will feature on ITV’s A Royal Grand Design, a special 10 years in the making which follows the royal’s ambitious plan to renovate a grand estate. Charles ... Read more »

An Afghan soldier fleeing the Taliban spent months reaching the U.S. to request asylum. He was arrested at the Texas border.

Abdul Wasi Safi was trying to reach his brother, who immigrated legally to Houston after helping the U.S. military. Legal experts say Wasi may have to serve a criminal sentence before he can pursue asylum. Read more »

When will England play in the World Cup round of 16? Date, UK kick off time, opponent for knockout round

have and have topped the group for the first time since 2006. opened the tournament with a record breaking 6-2 victory over Iran but were held to a 0-0 draw ... Read more »

Consumers have been warned of a “big, big shortage” of British free-range turkeys this Christmas due to an outbreak of bird flu. The epidemic has already killed half of the ... Read more »

Cristiano Ronaldo ‘close’ to agreement worth €500m with Saudi Arabian club after Man Utd exit, as European and MLS sides blown away

Cristiano Ronaldo, Champions League Cristiano Ronaldo appears to be on the verge of finding his next club following his second departure from Manchester United. Ronaldo recently brought an end to ... Read more »

Jim Carrey. Axelle/Bauer-Griffin/FilmMagic. Comedian, actor, and artist Jim Carrey announced Tuesday that he is set to join Twitter’s celebrity exodus and shared a new animated cartoon with his followers to ... Read more »

A 15-year-old was shot and killed while sitting on the front porch of a home Tuesday night in Chicago’s Englewood neighborhood, police said. According to authorities, the boy was sitting ... Read more »

State Senator Hawkins introduces himself to the Snoqualmie Valley

The Washington State Redistricting Commission recently approved new boundaries for our state’s 49 legislative districts, a process completed every 10 years to balance the population among districts. One of the ... Read more »

The leaders behind a major development coming to the Charleston peninsula are hoping to add more affordable housing to the area ahead of schedule. CHARLESTON, S.C. (WCSC) – The leaders ... Read more »

If you’ve been on social media at all in the last few hours – who hasnt!? TBH – then you’ll likely have come across Queen Consort Camilla’s latest tweet. In ... Read more »

After the community backlash, Jack Dorsey's project TBD backed out of the previously announced plan to trademark the term “Web5.” Read more »

Pa. county meeting again to certify midterm results after Republican-led delay The Democrat who abstained from the vote later said his concerns were addressed. The Luzerne County Board of Elections ... Read more »

This week's ISPS Handa Australian Open is set to provide a unique experience for golfers, one Adam Scott is looking forward to. Read more »

The bodies were discovered in a batch of abandoned goods bought by a family at a storage unit auction. Read more »

Protesters gather near the Chinese consulate to stand in solidarity with their counterparts around the world demonstrating against China’s severe anti-virus restrictions on Nov. 29, 2022, in New York. AP ... Read more »

Strictly Christmas Special 2022 lineup: who are contestants in this year’s BBC dancing show, when is it on TV?

Photo of Biden with ‘miserable’ Republicans sparks amusement: ‘This should be the White House Christmas card’

FTX hired private planes to fly Amazon packages from Miami to staff at its Bahamas HQ because it didn't deliver to the country, report says

Who is Stephanie Frappart? Referee to make history as first female in charge of men’s World Cup match

Why has Juventus' board resigned?

Black rhino populations are starting to thrive in Zimbabwe for the first time in decades, experts say

Report: Authoritarianism on the rise as democracy weakens