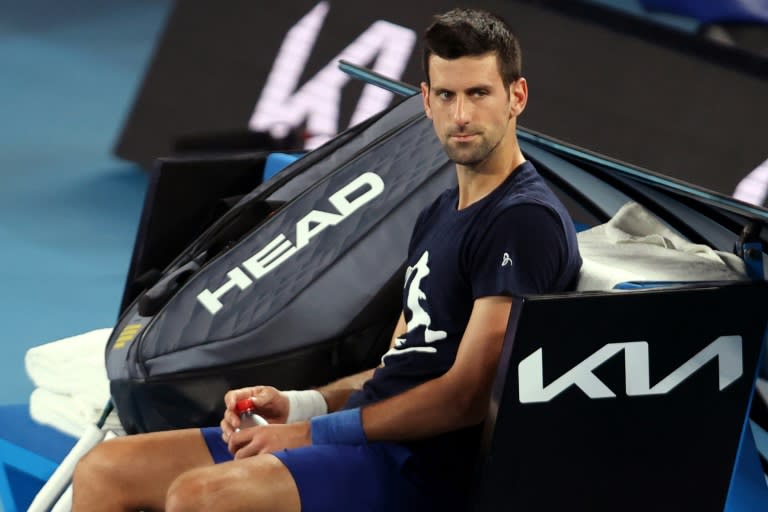 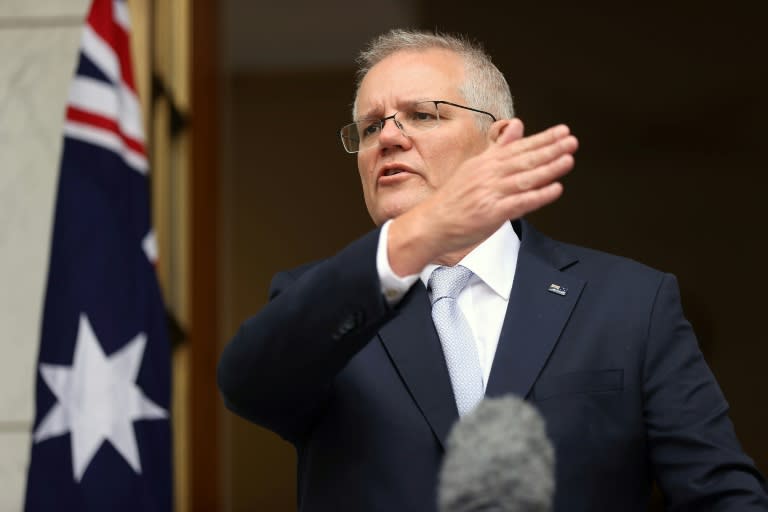 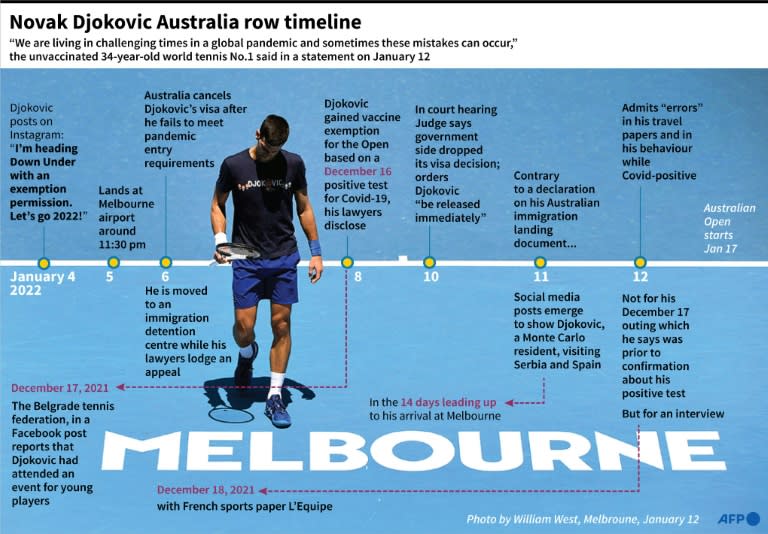 Yahoo News is better in the app 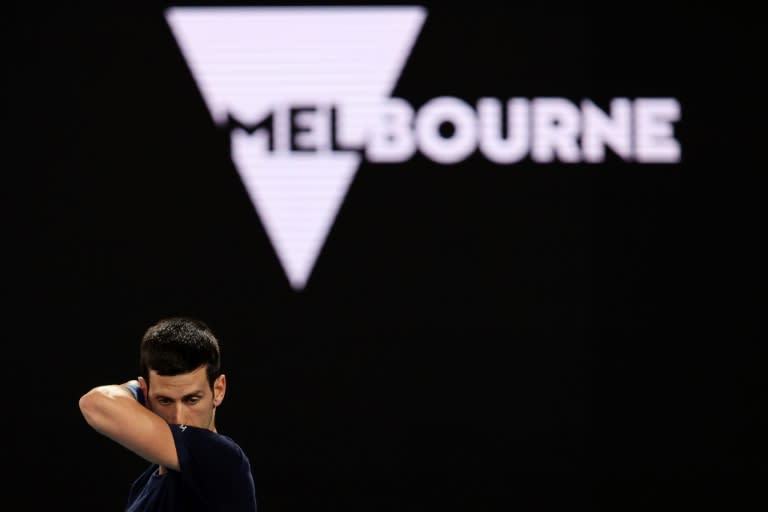 4/4Australia vows to enforce Covid rules ahead of Djokovic decisionThe Serbian world number one is looking to secure a 10th title at the Australian Open, as well as a record 21st Grand Slam (AFP/MARTIN KEEP)

The Serbian world number one is looking to secure a 10th title at the Australian Open, which gets underway on Monday — as well as a record 21st Grand Slam.

Prime Minister Scott Morrison's government has come under fire for not taking a decision sooner on whether to eject the 34-year-old tennis ace, an avowed vaccine sceptic.

Djokovic's legal team scored a win Monday by quashing the cancellation of his visa by Melbourne airport border control over his Covid-19 vaccination status.

Since then, Immigration Minister Alex Hawke has been threatening to use his own powers to tear up Djokovic's visa for a second time.

Finance Minister Simon Birmingham insisted Friday that Australia only lets in foreign nationals who are fully Covid-19 vaccinated or have an acceptable medical exemption.

“That policy has not changed and we will continue to apply that policy rigorously,” Birmingham told national broadcaster ABC.

The visa battle with Djokovic is politically charged in Australia, which has endured nearly two years of some of the toughest coronavirus restrictions in the world.

General elections must be called by May.

Opposition Labor Party senator Kristina Keneally said it was now 58 days since Djokovic had been granted a visa to enter Australia.

“@AlexHawkeMP needs to decide now whether Djokovic stays or goes,” she said on social media.

“The Morrison Govt is just incompetent. This is a farce.”

Some tennis players say Djokovic should now be allowed to play, but not all have been supportive.

“For sure he has been playing by his own rules,” Tsitsipas said in an interview with Indian broadcaster WION.

“It takes a lot of daring to do and (is) putting a Grand Slam at risk… I don't think many players would do that.”

Nearly everyone in the Australian Open had been vaccinated, Tsitsipas said. But others “chose to follow their own way which kind of makes the majority look like they're all fools”.

Djokovic flew into Melbourne airport on January 5 claiming a vaccine exemption because of a positive PCR test result on December 16.

Border agents rejected his exemption, saying a recent infection was an insufficient justification, tore up his visa and placed him in a detention centre.

But Djokovic overturned the visa decision because border officials at the airport failed to give him the agreed time to respond.

As the Omicron variant races through Australia's population, Djokovic's actions have come under greater scrutiny.

The tennis ace described reports about post-infection outings without a mask in Serbia as “misinformation” in an Instagram post Wednesday.

On the day of his claimed positive test in Serbia, he attended a ceremony to honour him with stamps bearing his image. The following day he attended a youth tennis event. He appeared at both apparently without a mask.

Djokovic said he only received the PCR test result after going to the children's tennis event on December 17.

But he admitted that he also went ahead with an interview with French sports daily L'Equipe on December 18.

“On reflection, this was an error of judgement and I accept that I should have rescheduled this commitment,” Djokovic said.

The journalist who carried out the L'Equipe interview, Franck Ramella, said he had been unaware at the time of the interview that Djokovic was Covid-positive.

The tennis star also admitted to a mistake on his Australian travel declaration, in which a box was ticked indicating that he had not, or would not, travel in the 14 days before flying to Melbourne.

In fact, social media posts and reports show he flew from Serbia to Spain during that period.

Djokovic blamed his support team for this. “My agent sincerely apologises for the administrative mistake in ticking the incorrect box,” he said.

But the minister may also act if he believes Djokovic may flout Australian public health orders, based on his failure to self-isolate in Serbia, he said.

Various options to appeal would be open for both Djokovic and the government, but at the end of the day, the immigration minister can exercise his personal power to cancel the visa, the lawyer said.

As Covid-related hospitalisations rise in Melbourne, the Victorian state government said Thursday it would cap capacity at the Australian Open at 50 percent.

Spectators must be vaccinated or have a medical exemption. Face masks will also be mandatory at the opening Grand Slam of the year except when eating or drinking, and those watching must socially distance while indoors.

How Novak Djokovic could be barred from playing in French Open

What time is Emma Raducanu playing and how can I watch Australian Open match?

Australian Open 2022: TV channel, times and how to watch online in the UK

Aardman Animations, the creative studio behind Wallace & Gromit and other iconic stop-motion series, is developing a new, open-world video game based on an original IP. The game will focus ... Read more »

Naomi Osaka wasn’t going to stand for being quizzed about Novak Djokovic after her first-round win over Camila Osorio at the Australian Open. Defending champion Osaka was ruthless in seeing ... Read more »

The nine-time Australian Open champion was deported on Sunday after having his visa cancelled. Read more »

© AFP via Getty Images Barty After a build-up dominated by Novak Djokovic’s botched visa, the Australian Open was finally able to emerge from its political shadow on Monday and ... Read more »

Anti-trolling campaigner and journalist Erin Molan will join online safety advocates at a third hearing into how social media can be made safer for users. The former Channel Nine presenter ... Read more »

Education Secretary Nadhim Zahawi denies an operation is under way to save Boris Johnson amid claims of Downing Street parties. Read more »

Goodwill claims it was hit by data breach

American nonprofit Goodwill has suffered a data breach that is affecting the users of its ShopGoodwill.com e-commerce auction platform. Reports say the company’s platform has had an exploitable vulnerability which ... Read more »

Naomi Osaka began the defence of her Australian Open singles title on Monday with a straight-sets victory over Colombian Maria Osorio Serrano – although it wasn’t without one nervous moment. ... Read more »

Novak Djokovic was greeted by supporters when he arrived home in Serbia on Monday but another obstacle has been put in his path in the form of a tightening of ... Read more »

Microsoft Edge is bringing back a classic feature, but with a modern twist

Microsoft is trialling new functionality for web browser Edge that expands upon the RSS-style Followable Web feature, which landed recently in early-access. As part of an A/B testing process, the ... Read more »

Six months after contracting Covid, as many as 1.6 million people in the U.S. are still unable to smell or have experienced a change in their ability to smell. Read more »

© Provided by Mirror The long-running saga surrounding Novak Djokovic and his visa wrangle with the Australian government was “a cloud hanging over the players” in the build-up the the ... Read more »

Novak Djokovic has landed in Serbia after being deported from Australia after failing to overturn the decision to cancel his visa over his lack of COVID-19 vaccination. The current world ... Read more »

Novak Djokovic could be banned from French Open, too

Novak Djokovic will likely be banned from the 2022 French Open. AP Novak Djokovic could be cast out of another Grand Slam tournament this season after a new piece of ... Read more »

Novak Djokovic could lose his key sponsor Lacoste after the French clothing brand released a statement to admit they will be getting in touch with the player to talk about ... Read more »

While Novak Djokovic has appeared calm and collected throughout his deportation saga, one Australian has shown he knows exactly how to push the tennis champion’s buttons.  The Serbian tennis star ... Read more »

Novak Djokovic's Deportation Has His Sponsors on a Tightrope