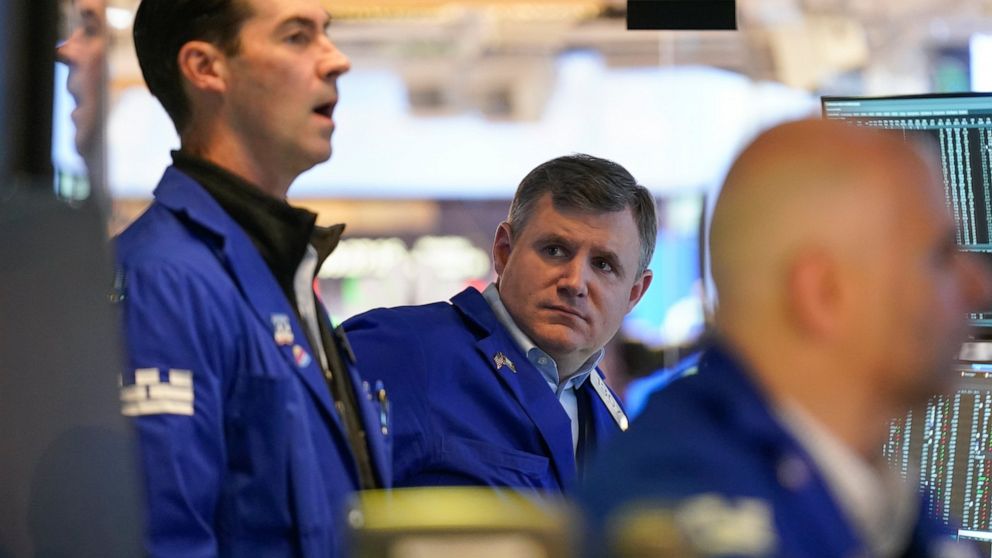 TOKYO — Asian shares were mostly higher Tuesday as jitters over protests in China set off by growing public anger over COVID-19 restrictions subsided.

Chinese shares rebounded after they were hit by sharp losses on Monday following protests over the weekend in various Chinese cities. Hong Kong’s Hang Seng jumped 4% to 17,981.31, while the Shanghai Composite added 2.3% to 3,148.17.

Although market sentiment has been weighed down by the recent demonstrations in China, some analysts noted calm could return in coming sessions. The world's second largest economy has been stifled by a “zero COVID” policy which includes lockdowns that continually threaten the global supply chain.

“The absence of any clear escalation in protests could aid to bring some calm to markets,” said Yeap Jun Rong, market strategist at IG.

The unrest has stoked worries on Wall Street that if Chinese leader Xi Jinping cracks down further on dissidents there or expands the lockdowns, it could slow the Chinese economy, which would hurt oil prices and global economic growth, said Sam Stovall, chief investment strategist at CFRA.

“A lot of people are worried about what the fallout will be, and basically are using that as an excuse to take some recent profits,” he said.

“Chinese markets are rallying early in the session as local investors take a more pragmatic approach to the current COVID proceedings. Indeed, a probable outcome is a quicker loosening of restrictions once the current COVID wave and numerous protest flash points subside,” he said.

Japanese government data released Tuesday showed that the unemployment rate for October was unchanged from September at 2.6%. Separately, data released by another ministry showed a slight increase in the number of available jobs per job-seeker at 1.35. The increase has continued for 10 months.

Hiring was up in anticipation of tourists returning in droves to Japan. Borders that have been basically closed during the coronavirus pandemic have reopened at a time when the declining value of the yen against the U.S. dollar and other currencies make Japan an attractive destination for tourists.

On Monday, more than 90% of the stocks in the S&P 500 closed in the red, with technology companies the biggest weights on the broader market. Apple, which has seen iPhone production hit hard by lockdowns in China, fell 2.6%.

The fallout from the collapse of crypto exchange FTX continued. Cryptocurrency lender BlockFi is filing for Chapter 11 bankruptcy protection. Cryptocurrency exchange Coinbase Global fell 4% and the price of Bitcoin slipped 2.1%.

Anxiety remains high over the ability of the Federal Reserve to tame inflation by raising interest rates without going too far and causing a recession. The central bank’s benchmark rate currently stands at 3.75% to 4%, up from close to zero in March. It has warned it may have to ultimately raise rates to previously unanticipated levels to rein in high prices on everything from food to clothing.

Federal Reserve Chair Jerome Powell will speak at the Brookings Institution about the outlook for the U.S. economy and the labor market on Wednesday.

The Conference Board will release its consumer confidence index for November on Tuesday. That could shed more light on how consumers have been holding up amid high prices and how they plan on spending through the holiday shopping season and into 2023.

The U.S. government will release several reports about the labor market this week that could give Wall Street more insight into one of the strongest sectors of the economy. A report about job openings and labor turnover for October will be released on Wednesday, followed by a weekly unemployment claims report on Thursday. The closely watched monthly report on the job market will be released on Friday.

In energy trading, benchmark U.S. crude added $1.37 to $78.61 a barrel in electronic trading on the New York Mercantile Exchange. Brent crude, the international standard, rose $1.81 to $85.00 a barrel.

3 Hospitalized in String of Attacks in Downtown San Diego

How to Increase Productivity

Netflix's Best and Worst of February 2023: 5 Must-See Movies and 2 Disappointments

As February approaches, so does the holiday of love, Valentine’s Day. With the special occasion just around the corner, it’s a good idea to start planning which new films on ... Read more »

The final member of a teenage gang who stole cars worth more than £1 million in “terrifying” north London robberies has been jailed. The group – responsible for around 30 ... Read more »

BRITS are bracing for “danger to life” gales after the Met Office issued a number of yellow weather warnings. Strong winds are expected to batter the nation with damage and ... Read more »

James Maddison with Brendan Rodgers Newcastle United continue to be linked with a move for Leicester City midfielder James Maddison – and speculation is not going away as the transfer ... Read more »

Snowmen, snowball fights and traffic jams – remember the fun and the chaos?

Snowmen, snowball fights and traffic jams – remember the fun and the chaos? (Image: Echo) WHEN it snowed in 2009, It was the most Dorset residents had seen in 18 ... Read more »

THE original Wednesday Addams actress Lisa Loring died aged 64 after she suffered a “massive stroke.” The tragic news of her death was shared by her good friend Laure Jacobson ... Read more »

Johnston-Celtic-Mooy-Jota-Postecoglou-Hoops-Dundee Celtic boss Ange Postecoglou oversaw the 50th Scottish Premiership victory of his tenure as his side ran out comfortable 2-0 winners away to Dundee United on Saturday evening, with ... Read more »

House prices: Zoopla says UK property market is off to ‘slow burn start’ with London flats in most demand

Zoopla housing price index: slow growth and London flats in demand The housing market in the UK has got off to a slow in 2023 with demand for cheaper, smaller ... Read more »

There’s been a creepy glow over the centre of Leicester in recent days and the source of it has now been revealed as the lights being used to treat the ... Read more »

Pallets Tea & Coffee House In Hampshire, we definitely have some of the best high streets in the country. From Winchester, which is never short on national acclaim, to the ... Read more »

Stop ‘chickenpox parties’ by giving children the vaccine on the NHS, experts say

chickenpox Risky pox parties could be rendered a thing of the past if a chickenpox jab were added to the NHS vaccination schedule, experts have said. New research suggests that ... Read more »

Jan. 29—A plan to clean up the intersection of Capitol Boulevard and Trosper Road in Tumwater — in the works for years — is finally getting underway. With entrances and ... Read more »

North Korea Lifts Lockdown in Capital Due to Outbreak

Leeds-bound Weston McKennie could be playing in the NFL if his military father answered a different call... but the Harry Potter fanatic has no regrets as he - and his two celebrity dogs - make the switch to Yorkshire from Juve

Weston McKennie is on the cusp of completing a loan move to Leeds from JuveHowever, the American's career in sport could've been a whole lot differentHe reveals his love for the NFL, Harry Potter - and why his dogs are celebrities  Read more »

Boy, 16, accused of murdering 15-year-old girl will appear in court today - as tragic teenager's mother thanks her daughter's new boyfriend after he was also attacked 'while trying to save her'

Holly Newton, 15, died after she and her boyfriend were attacked in HexhamA teenage boy is set to appear in court in Newcastle today charged with murder  Read more »

We're filling you in on troublesome pothole outside Shanklin station

Update to fill you in on troublesome pot hole outside Shanklin station (Image: South Western Railway.) South West Trains says repair work is finally about to start on a pothole ... Read more »

Hilary Duff and Ashley Tisdale were spotted in each other’s company in Studio City on Sunday morning. The Disney Channel alumni, aged 35 and 37, spent time with their respective ... Read more »

Adama Niane has died at the age of 56. The French actor was best known for starring in the Netflix hit Lupin, which became an international hit when it launched ... Read more »

Men at work in a factory Half of over-50s who have dropped out of the workforce are jobless because of long-term sickness or disability, new analysis shows, in a blow ... Read more »

Loose Woman legend gets her first tattoo to mark turning 60

LOOSE Woman legend Kaye Adams has celebrated turning 60 years old by getting her first tattoo. The TV host filmed her visit to the tattoo parlour in her hometown of ... Read more »

Packers Prefer To Trade Aaron Rodgers? An offseason trade of Green Bay Packers quarterback Aaron Rodgers remains an option for a variety of reasons, and league sources believe that the ... Read more »

The 10 most baffling Oscar wins

(Rex/Getty) Each year, the Academy of Motion Picture Arts And Sciences attempts to award Oscars to the “best” film or artist in each category that year, and each year it ... Read more »

No party without Partey, the Premier League’s most important player

When Julian Alvarez let fly, he had room to do so. His shot arrowed on to the base of the post. A few seconds later, Nathan Ake scored. Half an ... Read more »

Erik ten Hag thought of the Manchester weather and shrugged. “It’s no Copacabana, eh?” he said. Definitely not, but, instead of the Rio de Janeiro beach, there was a Brazilian ... Read more »

Is there hope for a dying river in Kenya's growing capital?

Is there hope for a dying river in Kenya's growing capital? As clean water runs short, one of Africa’s fastest growing cities is struggling to balance the needs of creating ... Read more »

And then there were two. Novak Djokovic's recent Australian Open victory was his 22nd Grand Slam title, tying him up with perennial rival Rafael Nadal. Read more »

The responsibility of meeting the demands of Celtic and their supporters has never waned for Callum McGregor during his first 400 games for the club. Read more »

Peloton instructor Leanne Hainsby, 35, says she is battling breast cancer and has finished 12 weeks of chemotherapy

Peloton personality Leanne Hainsby revealed on Instagram Friday that she has been battling breast cancer the past six months. Hainsby, 35, posted a carousel of photos of her hospital treatment, ... Read more »

Denim Bradshaw, 14, died after falling off a bull while at a rodeo event The bull stomped on Bradshaw's chest and he suffered from cardiac arrest Bradshaw's mother recalled she had never seen him happier before he died Read more »

Photograph: Oliver Rossi/Getty Images Turning into your parents is a loaded notion. A gesture, a jawline, a phrase that emerges from your mouth without conscious thought, maybe something about carnations, ... Read more »

To most people, owning your own business is a way to become successful. For me, it was a mission – a lifeline to a brighter future for myself and my daughters. ... Read more »

Readers sound off on work visas, the Tyre Nichols videos and MetroNorth lines

In the End It Was Mahomes, Ankle and All

Tyre Nichols remembered at vigils and protests across Northern California

LVMH, L’Oréal Among Suitors for Stake in Aesop

Novak Djokovic vs Rafael Nadal: Who will win the most grand slams?

How did Annie Wersching die? 24 and Last of Us actress dead aged 54