Arsenal and Burnley played out a 0-0 draw at the Emirates on Sunday afternoonAshley Westwood's tackle on Kieran Tierney was one of the game's key momentsThe Burnley man was only shown a yellow card for his tackle on TierneyHowever, some Arsenal fans believe that he should have been shown a red card

Arsenal’s top four hopes were dealt a blow when they were held to a 0-0 draw by Burnley on Sunday at the Emirates.

With both sides struggling to fashion many clear-cut chances, one of the main talking points from the game came in the first half when Kieran Tierney and Ashley Westwood clashed.

Tierney went to ground to win the ball, and Westwood arrived a little too late before catching the Arsenal left-back on the shin. 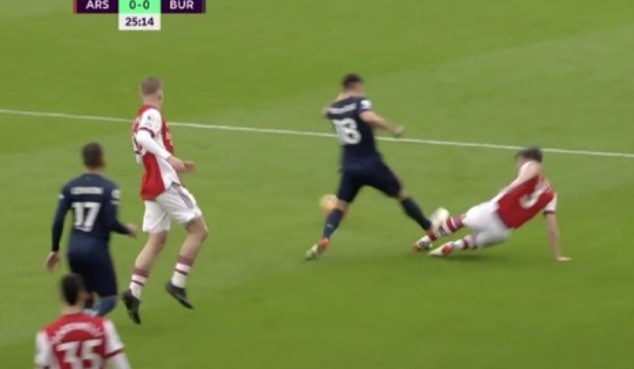 Ashley Westwood caught Kieran Tierney late, but was only shown a yellow card for the tackle

The Burnley midfielder was booked for the tackle, but some Arsenal supporters felt that this was too lenient and wanted VAR to intervene to advise referee David Coote to show Westwood a red card.

Taking to Twitter after the incident, one fan wrote: ‘Ashley Westwood gets a booking for an awful challenge on Kieran Tierney.

‘Really late and stamps on his calf. Think he’s got away with not getting a red there.’

He was far from the only one unhappy with Westwood’s attempt to win the ball either.

Meanwhile, one fan claimed that an Arsenal player would have been sent off if they had committed the same foul as Westwood.

He claimed: ‘If this was Lokonga on Westwood and Lokonga got sent off, I wouldn’t even challenge it. All I’d say is that it’s reckless and stupid but because Westwood doesn’t have an Arsenal shirt on he gets a yellow. All we want is consistency from VAR and Referees.’

Westwood managed to remain on the pitch, and he helped Burnley to a vital point in their fight to avoid relegation, while Arsenal are now two points behind fourth-placed Manchester United in the race for Champions League football.