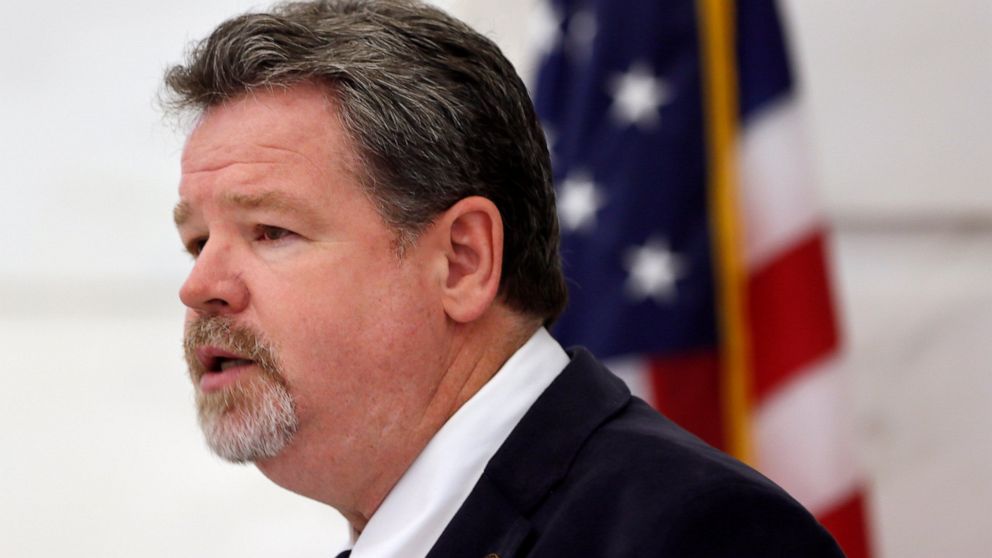 LITTLE ROCK, Ark. — An Arkansas state senator won't have access to Senate offices and can't participate in legislative meetings after the Senate on Tuesday ruled he made a frivolous ethics complaint against a fellow lawmaker in retaliation for sanctions he received earlier this year.

By a 26-4 vote, the majority-Republican Senate approved its ethics committee's recommendation to suspend GOP Sen. Alan Clark for the rest of the 93rd General Assembly, which ends on Jan. 8.

The Senate earlier this month rejected a complaint Clark had filed against Democratic Sen. Stephanie Flowers accusing her of improperly receiving per diem payments for legislative meetings she attended via Zoom.

The ethics panel ruled that Clark had filed the complaint as retaliation after the Senate stripped him and another lawmaker of their leadership posts after Clark sought reimbursement for a meeting he didn't attend.

“The committee felt that the comments and actions of Senator Clark, including bringing these ethics petitions for the purpose of retaliation, were bringing dishonor and disruption to the institution of the Senate,” Republican Sen. Kim Hammer, who chairs the ethics committee, told senators before the vote.

Clark didn't attend Tuesday's proceedings, citing a long-planned trip with his family and said his attorneys would not have been able to attend. The lawmaker accused the Senate of punishing a whistleblower with its vote.

“How can we be expected to fight corruption and wrongdoing in government if we can't reveal and stand against our own questionable behavior?” Clark said in a statement via text message. “I am saddened for this body that I love, more than anything else.”

Rules the Senate adopted during the coronavirus pandemic allowed members to participate remotely, but not receive per diem funds. Flowers had not requested the payments and repaid the money in August after she realized she had received them because of a clerical error, the ethics committee found.

The ethics committee cited comments Clark made before filing the complaint on social media and a picture that circulated of him wearing a scarlet “E” — similar to the scarlet “A” worn as punishment for adultery in Nathaniel Hawthorne's The Scarlet Letter — at a Republican Party event after he was sanctioned by the Senate.

The vote came after nearly three hours of contentious debate, with defenders of Clark criticizing the Senate for taking up the ethics charges without him present. Legislative leaders noted that other lawmakers had made time for the Senate's proceedings, despite work and other obligations.

Republican Sen. David Wallace, who voted to suspend Clark, at one point complained about the drawn-out debate over the Senate's ethics procedures.

The vote marks the first time a senator has been suspended under a 2018 overhaul of the Senate's ethics rules that were enacted after several lawmakers were implicated in a federal corruption probe.

After suspending Clark, the Senate also voted to change its rules to require that an ethics complaint be filed by at least three senators, rather than just one.

‘Island of trash’: This man is on a mission to clean thousands of tons of plastic from Bali’s waterways

'Tastes like I'd rather be fat': GOP senator wails about kale and yoga mats while calling Democrats 'berserk'

Frozen raspberries recalled due to hepatitis A concerns

What to Know as Supreme Court Weighs Same-Sex Marriage Case

The case marks the second time in five years the Supreme Court has confronted the issue of a business owner who says their religion prevents them from creating works for a gay wedding. But this time, things could end differently Read more »

What's the secret sauce that lets some poor countries prosper?

Before COVID, business in Beijing was booming. Dercon says one of the reasons state-led development in China has been so successful is because the country had a strong state to ... Read more »

The potency of street cannabis has jumped from 4% to more than 15% in recent years, raising the risks of addiction and psychiatric disorders, according to a leaked report from Washington state

The levels of THC, the psychoactive ingredient in pot, found in drug-bust seizures has risen steadily since the 1990s Researchers connect the rise to the 'commoditization' of pot by a multibillion-dollar industry in states where it has been legalized Some cannabis concentrates known as 'dabs' have close to 100 percent purity Novice pot users have unknowingly started out on high-strength products and suffered panic attacks and paranoiaSome end up calling poison-control hotlines or in hospital emergency roomsWashington state may introduce extra taxes as a way to discourage the use of high-strength products   Read more »

Indonesia is set to overhaul its criminal code, making sex outside of marriage punishable with up to one year in jail - a move critics say could curb freedoms and police morality. Read more »

Review: The digital sleuths who demystified cryptocurrency “Tracers In The Dark” by Andy Greenberg sketches the evolution of a wholly new discipline — the tracking of cryptocurrency transactions by a ... Read more »

In this combination of photos Arizona gubernatorial candidates, Republican Kari Lake, left, appears before a PBS televised debate on June 29, 2022, in Phoenix and Democrat Katie Hobbs smiles prior ... Read more »

Jamie Mccarthy/Getty Images The cancellation of HBO Max and DC’s “Batgirl” film is still very much on the mind of directors Adil El Arbi and Bilall Fallah. The pair were ... Read more »

The crypto exchange owned by the Winklevoss twins is trying to recoup $900 million from a cash-strapped crypto broker that has been gutted in the wake of the FTX collapse, ... Read more »

We just love a happy ending! There’s nothing better than giving a long term shelter cat a home. Older cats are sometimes passed by in lieu of people adopting kittens ... Read more »

Humphrey opened up the living space when he bought the apartment (Knight Frank) A âpart-home, part-exhibitionâ flat in Battersea with design inspired by Leonardo Da Vinciâs paintings and sketchbooks is ... Read more »

The Good Doctor Fans Aren't Happy About Isabel Being Recast

Judge Neil Gorsuch speaks after his swearing as an associate justice of the Supreme Court in Washington, April 10, 2017. Justice Gorsuch slammed the state of Colorado on Monday for ... Read more »

Paul Pelosi was cheered at the Kennedy Center Sunday night during his first public appearance since being attacked in his San Francisco home by a hammer-swinging assailant in late October. ... Read more »

Why are some World Cup players wearing masks on the field?

If you're watching the World Cup, you may be wondering why some high-profile players have been wearing masks during games. Read more »

Ronald E. Richards has been charged with the killing of Evelyn Fisher-BamforthHe was a person of interest in the case but DNA has helped link him to the crimeEvelyn was brutally raped and murdered in her mobile home   Read more »

New video shows the moment a 7-year-old boy and his father were hit by BB gun pellets in a Staten Island incident that authorities are investigating as a possible anti-Semitic ... Read more »

Just when we didn't think Lindsey Graham could get any more dramatic, he did this...

Lindsey Graham went on Fox News on Friday to warm viewers that “it’s just a matter of time” before a dangerous terrorist wanders across the southern border and into the ... Read more »

From 'Spoiler Alert' to 'The Whale': December's must-see queer content

The final watchlist of 2022 has a little bit of everything, from returning series to moving documentaries and Christmas blockbusters making it before the Oscars submissions cutoff. That means the ... Read more »

D-Day in Georgia: Walker and Warnock go head-to-head in battle for the final Senate seat after campaign filled with personal attacks - and werewolf stories: Democrat holds the edge in polls - with 1.8 million having already cast early ballots

In the general election, Warnock finished just ahead of his GOP challenger, 1,943,737 votes to 1,907,272 votes, or 0.9 percentAccording to the latest polling Warnock is still running ahead - 52 to 48 percent according to the latest CNN pollAlready more than 1.8 million have cast their ballots, either in person or absentee, during early voting Read more »

Man charged with killing 4 workers at Oklahoma pot farm Oklahoma prosecutors say a man accused of killing four workers at a marijuana farm had demanded the return of his ... Read more »

The Kitchener Rangers were victorious as they visited the Guelph Storm on Saturday night in the latest instalment of the Battle of Highway 7. Francesco Pinelli, who was returning from ... Read more »

Baker Mayfield’s time with the Carolina Panthers is over. The 27-year-old quarterback was released by the Panthers on Monday, the team announced, and he’ll now be subject to waivers. It’s ... Read more »

Governor Baker joined the shoveling at the South Coast Rail groundbreaking on the New Bedford Main Line in Freetown in 2019. On Monday, the MBTA announced that the Fall River ... Read more »

Even new COVID variants ‘are still transmissible between humans and bats’

COVID variants are still transmissible between humans and bats. (Getty) Ever since the virus which causes COVID-19 first transmitted from bats to humans in December 2019, it has evolved, but ... Read more »

Portugal coach Fernando Santos has revealed he was not happy with Cristiano Ronaldo's reaction after being substituted in their final World Cup group game. Read more »

The English National Opera (ENO) has teamed up with TikTok stars to turn the Netflix series Tiger King into a five-act “TikTopera”. Credit: PA Last month, we were told by ... Read more »

A heartbreaking photo showing a leopard holding a dead baboon in its jaws—with a baby still clinging on to its deceased mother—is among a number of images in the running ... Read more »

With 20- and 30-year rates at or above 6%, homeowners stand to save the most interest with a shorter repayment term Read more »

‘Blonde’ director responds to backlash: How could I exploit Marilyn if she’s dead?

Andrew Dominik prefers criticism. The “Blonde” director responded to the backlash about his Netflix film Sunday, saying that he is pleased that he offended several viewers, according to the Hollywood ... Read more »

Edmonton home prices fell slightly and activity slowed in November, according to the monthly report released by the Realtors Association of Edmonton. New listings were down 22 per cent from ... Read more »

The nostalgic special's soundtrack has sold millions of copies — and the lyrics to one famous song were first scribbled on a scrap of paper. Read more »

Coming to terms: The COVID lockdowns were all for naught

Petition to Disqualify Donald Trump From Running Gets Over 100k Signatures

The women at the center of Harvey Weinstein's LA rape trial

Expect delays on I-81 for upcoming road work