Texas and Oklahoma have been talking with Southeastern Conference officials about leaving the Big 12 and joining the SEC, according to a report published Wednesday in the Houston Chronicle. An announcement could come within weeks, the newspaper reported. However, high-level sources at both schools were evasive when asked about the situation by the Austin American-Statesman. “Sorry, I can’t comment on all the athletic rumors swirling around right now in this crazy time,” Texas President Jay Hartzell told the Statesman last week. A person in the Oklahoma athletics department told the Statesman via text message, “Come on now? Is this (‘Groundhog Day’) all over again?” At SEC media days in Hoover, Ala., SEC Commissioner Greg Sankey had “no comment on that speculation,” according to CBS Sports. Sankey also told a reporter from 247Sports, “I’m here to talk about the 2021 season.” 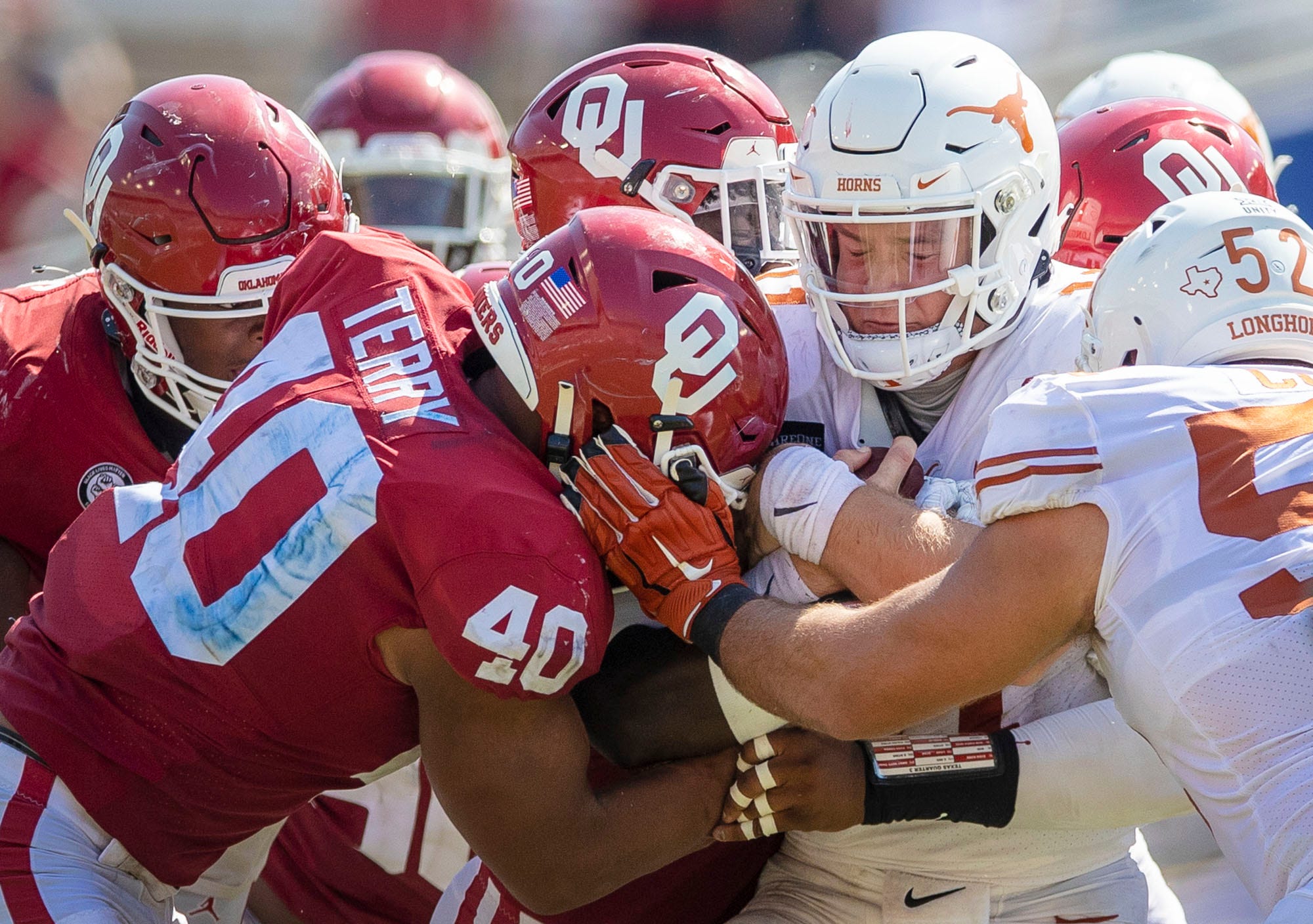 On stage talking with SEC reporters, Texas A&M coach Jimbo Fisher was asked if he thought Texas and Oklahoma would like to join A&M’s league. “I bet they would. I’m just worried about A&M,” he said. For any new team to join the SEC, it would take a majority decision by the league’s members. A&M left the Big 12 and joined the SEC prior to the 2012 football season in part to get away from Texas.

“We want to be the only SEC team from the state of Texas,” A&M athletic director Ross Bjork told Sports Illustrated on Wednesday. “There’s a reason why Texas A&M left the Big 12 — to be stand alone and have our own identity. That’s our feeling.”

What could be driving the discussions? College football has been rocked by a series of changes in recent years, most notable the transfer portal and new rules about name, image and likeness.

Also, most major conference TV contracts are up for renewal in 2023 or 2024. And college presidents and athletic directors are now talking about expanding the College Football Playoff to 12 teams. It’s unclear how any of these changes are going to affect the financial dynamics in play.

Joe Judge is old-fashioned when it comes to coaching Giants

Ajax well past Leeds: ‘But now our team is not fit to perform the way I have in mind' | Dutch football

Looking back | Public attraction Olij finds way at NAC: ‘I understand that people sometimes think there is something loose' | NAC

Nick Olij is the new captain of NAC. He joined the club in 2019. Breda then became acquainted with an uninhibited, jovial public attraction. The Haarlemmer solved a slumbering goalkeeper ... Read more »

The appointment of Louis van Gaal as national coach of the Dutch national team, up to and including the 2022 World Cup, did not exactly come out of the blue. ... Read more »

Froome is no longer a shadow of the rider he was before his heavy fall in the Dauphiné of 2019. “That he is on the bike at all is a ... Read more »

The competitors in artistic swimming displayed strength, beauty and grace while competing at the Tokyo Olympics. Previously, the event was known as “synchronized swimming” until the international federation for Artistic ... Read more »

Inter presented a short video showing a laughing Eriksen receiving applause, hugging his teammates and posing for a group photo while holding up a shirt of the ‘nerazzurri’. The future ... Read more »

ASHBURN, Va. – Scott Turner, the offensive coordinator of the Washington Football Team, has a steady stream of chatter flowing from just over his shoulder while trying to call plays ... Read more »

Riot breaks out as Colombian fans return to soccer stadium

BOGOTA, Colombia (AP) — A long-awaited return to El Campin stadium turned into a riot in Colombia’s capital as soccer fans battled one another and invaded the pitch. Police said ... Read more »

It was therefore not surprising that Van Rouwendaal chose the track of the Brazilian leader at three quarters of the race. With that, ‘SvR’ seemed to have made the right ... Read more »

Today the club announces that all 12,000 season ticket holders will be admitted to the first two home games of this season without exception. Friday August 13 against Telstar and ... Read more »

Speed, agility and focus have helped athletes at the Tokyo Olympics break world records. While multiple perennial favorites such as Michael Phelps and Usain Bolt may not be competing in ... Read more »

After twelve years of PSV, Koen Oostenbrink will play football at FC Eindhoven on an amateur basis | FC Eindhoven

Koen Oostenbrink (21) joins the first team after a short trial period at FC Eindhoven on an amateur basis. The midfielder from Veldhoven was without a club after playing football ... Read more »

Internazionale said in a statement that Eriksen is in “excellent physical and mental health”. He will follow a program at the Italian club that the doctors in Denmark have prepared ... Read more »

TOKYO – The only way Lasha Talakhadze wasn’t winning the Olympic super-heavyweight competition was if he missed the bus. But the Georgian weightlifter didn’t just win – he broke three ... Read more »

As he constructed seemingly an entire new roster in the past week, Los Angeles Lakers general manager Rob Pelinka has become a mad scientist. He has assembled another NBA super ... Read more »

On his Olympic debut, weightlifter Enzo Kuworge finished sixth in the heavyweight category (+109 kg). The 19-year-old from Nijmegen, who has a height of 1.98 meters and a weight of ... Read more »

Writer Cindy Hoetmer tweeted that she thinks it stupid when athletes are called heroes. “They just play sports for themselves,” it said. Peter R. de Vries thinks she is a ... Read more »

The twin sisters Noortje and Bregje de Brouwer finished ninth in the duets in the Olympic final synchronized swimming. The gold went to the Russian couple Svetlana Kolesnishenko and Svetlana ... Read more »

no revengeThe Dutch handball players were again eliminated by France at the Olympics. Five years after the nerve-racking 24-23 defeat in the semifinals in Rio de Janeiro, the physically strong ... Read more »

TOKYO – Whenever Quanera Hayes’ 2-year-old son Demetrius sees someone running at the Tokyo Olympics, he stands at the TV and yells, “Go Mommy! Go Mommy!” It doesn’t matter whether ... Read more »

By Yoo Jee-ho TOKYO, Aug. 4 (Yonhap) — For a few moments after his South Korean team upset Turkey in the quarterfinals of the Tokyo Olympic women’s volleyball tournament Wednesday, ... Read more »

Kenya dominated the 800 meters. Emmanuel Korir was the strongest. The Kenyan was only just ahead of his compatriot Ferguson Rotich with 1.45.06. The 26-year-old Korir won a Diamond League ... Read more »

De Grasse accelerated in the last 100 meters and passed Bednarek, who had come out of the corner fastest. It is De Grasse’s first gold medal at the Olympics. At ... Read more »

YOKOHAMA, Japan — There is a general rule of no cheering in the press box. Except maybe these hushed celebrations, emanating from volunteers working these Tokyo Olympics, in the fifth ... Read more »

Anouk Vetter competes for gold in heptathlon: in the lead after 4 of 7 parts | Tokyo Olympics

Anouk Vetter has started the Olympic heptathlon in Tokyo excellently. The 28-year-old athlete from Arnhem even takes the lead in the standings after the first day, on which four parts ... Read more »

Maikel van der Vleuten and his horse Beauville Z won the bronze medal in the individual show jumping final. Van der Vleuten, together with five other combinations, had qualified for ... Read more »

Pata was born on the Antillean island of Sint Maarten and was active at FC Zoetermeer and Alphense Boys. He also played a season with the Under 19 of ADO ... Read more »

Show jumper Maikel van der Vleuten took bronze in the individual final at the Olympic Games in Tokyo. Van der Vleuten remained clear in the first final round on the ... Read more »

“You don’t win silver, you lose gold,” said Benjamin Whittaker, after he had to acknowledge his superiority in Arlen Lopez in the Olympic semi-heavyweight boxing final. The 24-year-old Whittaker managed ... Read more »

“You don’t win silver, you lose gold,” said Benjamin Whittaker, after he had to acknowledge his superiority in Arlen Lopez in the Olympic semi-heavyweight boxing final. The 24-year-old Whittaker managed ... Read more »

Aric Almirola identifies the most challenging aspect of NASCAR playoffs

Kids and cars: Today's teens in no rush to start driving

Thanks to the green screen in my Ocha app, I can prepare for the Rotterdam Marathon in Japan | Olympics

Lions defense a work in progress, has nowhere to go but up

Opinion: It's bronze or bust as USWNT tries to salvage disappointing showing at Tokyo Olympics

Climbing to the top: Sport climbing makes its Olympics debut at Tokyo Games

Monster transfer of 117 million euros in the making: ‘Jack Grealish on the verge of signing with Manchester City' Football

Slot sees that Feyenoord is not yet going great: ‘But I'm actually happy about that' | Sport