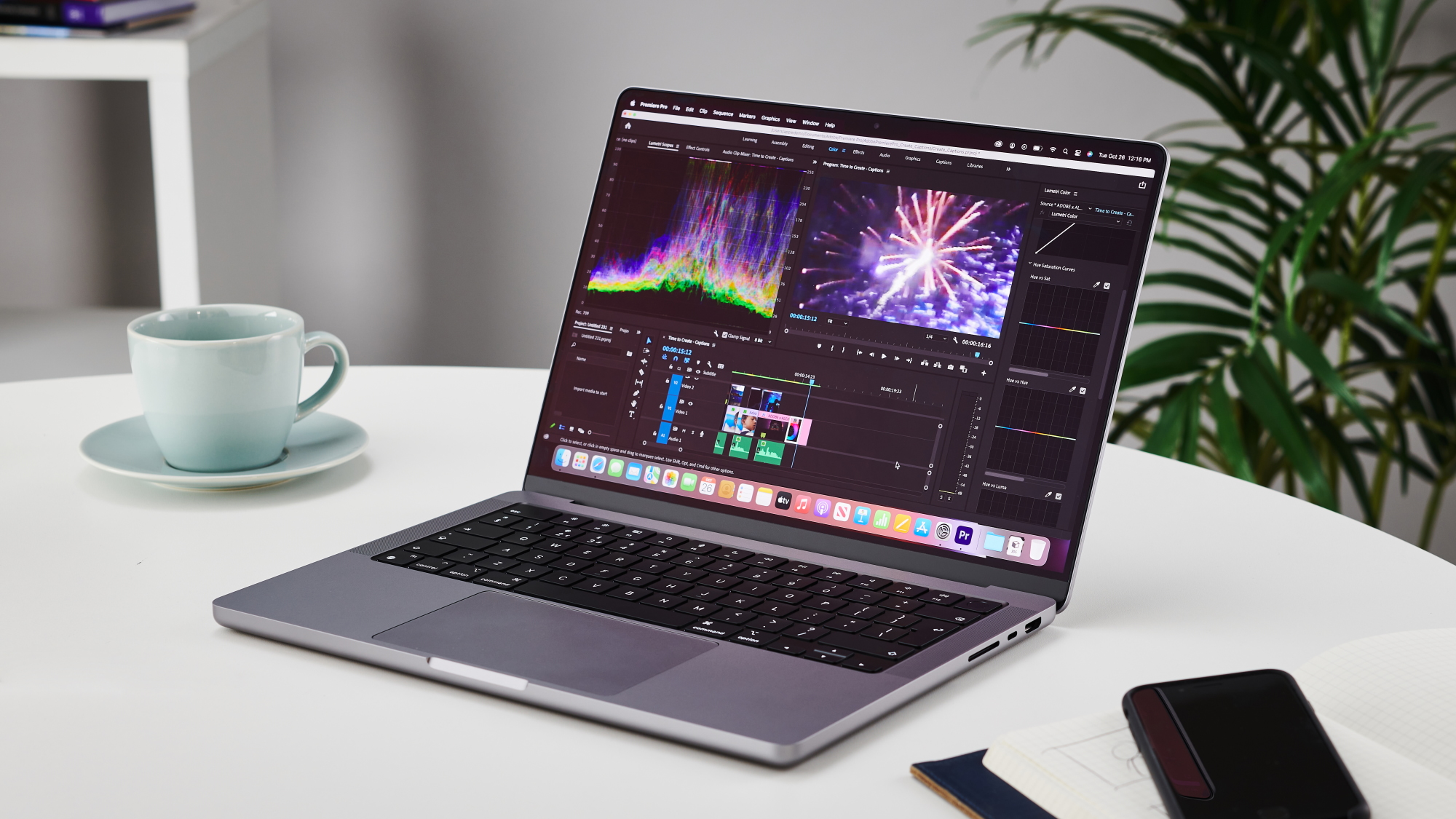 The new MacBook Pro models with Mini-LED screens have run into further controversy around the notch, with Apple having to introduce what seems to be a quick workaround for apps that run into trouble with said notch.

As spotted by @Jatodaro on Twitter, there are scenarios with some apps where details put in the top bar which runs alongside the notch, can actually end up being placed in the area where the notch is – where there’s no screen (just the webcam) – so these icons or options effectively disappear.

Good news for notch haters! If you’ve got an app (or apps) with menus that collide with the notch, just Get Info on the app, and enable “Scale to fit below built-in camera”. While the app is running (even in the bg), your display is scaled.#Apple #M1Pro #M1Max #MacBookPro2021 pic.twitter.com/nlGqkFkXAHOctober 27, 2021

The video embedded in the tweet shows the issue, and as @Jatodaro further elaborates, Apple has a solution – or rather what looks like a hastily applied band-aid. Users suffering at the hands of the notch obscuring details along the top can select the problematic app, choose ‘File’, then ‘Get Info’ and then the option to ‘Scale to fit below built-in camera’ as described in an Apple support document.

This does exactly what it says, namely scales the desktop down so it fits under the notch and top bar, effectively making the top bezel larger – and not just the top bezel, but the side ones too. The whole desktop is scaled down, and this continues to be the case when running the app, even if it’s in the background, with things reverting to normal when the application in question (requiring the scaling) is closed.

Analysis: No notch, but embiggened bezels

With this fix from Apple, then, any issues around the notch obscuring options or content from apps can be side-stepped, but you’re obviously getting chunkier bezels all-round, making the MacBook look distinctly less nifty as a result. It’s not clear why Apple couldn’t plump for a more elegant solution whereby only the top menu bar was clipped off (rather than scaling the entire screen area down).

However, the seemingly clunky nature of this solution may not really matter that much, given that very few apps will actually run into this problem. Apple likely views this as a simple stopgap measure that’ll only need to be employed in some very niche cases, and the firm expects devs to get around to updating affected macOS apps soon to cure any such notch collisions.

As Apple states: “If a developer updates their app for compatibility with your Mac, the ‘Scale to fit below built-in camera’ setting no longer appears. You can contact the developer of the app to learn whether an update is available or planned.”

This seems to be a roundabout way of saying get on these developers’ cases now, because this is something they need to sort out pronto.

Naturally, this won’t help all the confusion and, in some cases, hatred springing up around the notch. As you may have seen earlier this week, some enterprising developers are already making apps specifically designed to hide the notch.

As we’ve observed elsewhere, in a lot of ways all this controversy feels overblown, and the notch certainly didn’t blot the laptop landscape for us in the case of our glowing Apple MacBook Pro 14-inch (2021) review. Some folks, however, just can’t seem to get over the appearance of the notch and the apparent distraction and annoyance its simple presence causes them – and maybe, more to the point, they don’t find Apple’s explanation for why the notch was implemented satisfactorily.

If you've ever wanted to learn to be an animator, this package can make it happen

With this infrastructure in place, customers wouldn't have to wait for the scooter to charge, be anxious about the range or remember to charge it, Bounce said. Electric scooter rental ... Read more »

Taika Waititi is turning his attentions to the stars. Once he’s got the upcoming Thor: Love and Thunder and sports comedy Next Goal Wins out the way, the in-demand writer, ... Read more »

The tech giant Google on Saturday warned that the cloud service is under threat saying that cyberhackers have been using compromised accounts to mine cryptocurrency. Google’s cloud service offers a ... Read more »

New Delhi, Nov 27 (PTI) Democratic countries need to join hands to think about creating safety, trust and accountability on the internet which has no boundaries, Minister of State for ... Read more »

$3.98 for 10TB online is what the best Cyber Monday cloud storage costs and it's exclusive to TechRadar

IDrive is the latecomer to our Cyber Monday cloud storage deal lineup but they delivered the best deal out there, by far, bar none. How they did it, we don’t ... Read more »

Historic flight could be the first of many for tourists and scientists to the continent at the bottom of the world. Read more »

OMG Apple, why are you so boring?

I used to be really fat. Then I lost so much weight so quickly that the doctor sent me for tests. At the end of the diet, I went to ... Read more »

Having battled it out in midfield in their playing days, this afternoon’s match at Selhurst Park sees Patrick Vieira and Steven Gerrard take each other on from opposing dugouts. Read ... Read more »

You probably have never heard of RISC-V but this is an exciting new hardware development fostered primarily by the Chinese government to reduce the domestic influence of CPU and GPU ... Read more »

Nvidia’s long-rumored desktop version of the RTX 3050 (as opposed to the existing laptop model) could be here in the second quarter of next year, so perhaps as soon as ... Read more »

Liverpool vs Southampton live stream: how to watch Premier League from anywhere

Liverpool will look to continue their recent impressive showings by claiming their third win in eight days, as they welcome Ralph Hasenhuttl’s Saints to Anfield. Read on to find out ... Read more »

Aerial view of the excavations of a large Roman mosaic in Rutland, England.Historic England Archive A man taking a lockdown walk on his father's farm stumbled across a rare Roman ... Read more »

Thousands have already had their travel plans disrupted as the festive season gets under way and scientists say there are similarities between the spread of the new variant of concern with that of the Alpha variant last December. Read more »

Nordstrom Black Friday isn't over yet—you can still get nearly 50% off everything, including Dyson, Coach and more (live updates)

— Recommendations are independently chosen by Reviewed’s editors. Purchases you make through our links may earn us a commission. Black Friday might be behind us, but the sales at Nordstrom ... Read more »

ring doorbell Amazon If you're looking for an easier way to monitor your front door and manage visitors in order to feel safer and more comfortable at home, a video ... Read more »

MediaTek Dimensity 9000 chip to cost twice as much as the Dimensity 1200 SoC: Report

The MediaTek Dimensity 9000 is the first smartphone chipset built on the 4nm process. However, new information suggests that smartphones powered by the new MediaTek chipset may not be as ... Read more »

Sheridan Smith has reportedly had a backstage row after growing “upset” during her time on The Jonathan Ross Show. The actor and singer, 40, will appear on Saturday’s episode of ... Read more »

Louise Redknapp let her hair down on Friday night to enjoy an evening of music with her “boys” following her ex-husband Jamie Redknapp welcoming a baby with his new wife. ... Read more »

Lost iPhone or Android phone? Take these steps to protect yourself

It’s the worst feeling: that moment you realize your smartphone is missing. Panic ensues, and you begin the frantic search around you, lifting sofa cushions and retracing your steps. But ... Read more »

Improving video capture and sharing is a ‘priority' for Xbox

When it comes to making improvements to Xbox Series X/S, the team at Xbox is placing video capture quality and sharing high on its priority list. As reported by VGC, ... Read more »

Poco to launch laptops with 16-inch screen and 3,620 mAh battery in India

Smartphone brands are diversifying outside mobile phones and are introducing multiple AIoT products. Poco, which was earlier a part of Xiaomi, has now made its separate identity in the market ... Read more »

Samsung starts production of Galaxy A13 in India at the Noida factory: Report

How to watch UK Championship 2021: live stream snooker free and from anywhere

Neil Robertson consigned Judd Trump to more UK Championship heartbreak 12 months ago, but the Bristolian enters the first Triple Crown event of this season in top form. Will anyone ... Read more »

Not much is known about Moore Threads, a Chinese tech company that just celebrated its first birthday, and now wants to double the number of concurrent threads every two years. ... Read more »

You may remember that Spotify launched a special Car View mode for its Android app back in 2019, featuring a simplified interface with larger buttons to make it easier to ... Read more »

The latest series of I’m a Celebrity… Get Me Out of Here! has been hit by chaos in recent days. This year’s crop of stars entered the compound, which was ... Read more »