Sydney's house prices in year to November up 30.4 per cent to $1.360millionThis occurred as median apartment price rose by 15.2 per cent to $837,169CoreLogic research director Tim Lawless said demand for units could increase

Apartment prices could finally start climbing with three big cities in Australia now having typical prices in the seven figures.

Across Australia, property prices in the year to November surged by 22.2, the fastest annual pace since early 1989 despite tighter new lending rules coming into effect, new CoreLogic data showed.

In some cities, house prices have soared at double the speed of apartments but affordability issues could change that. 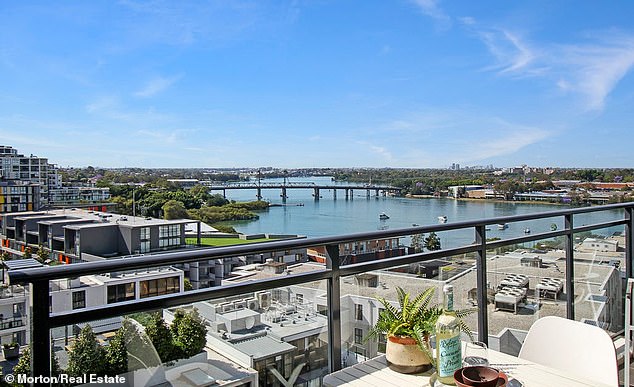 Apartment prices could finally start climbing with three big cities in Australia now having typical prices in the seven figures. Capital city apartment values have risen by 12.6 per cent over the year to $634,846 (pictured is a one bedroom unit at Meadowbank in Sydney’s north for $650,000

Canberra, now Australia’s second most expensive capital city market, has a mid-point house price of $999,755 – just $245 below the psychological $1million mark following an annual increase of 27.2 per cent.

CoreLogic research director Tim Lawless said young buyers who couldn’t afford a house were likely to gravitate towards a unit, as price records continued to be set for homes with a backyard.

‘With higher barriers to entry, especially for new home buyers who don’t have the benefit of accrued equity behind them, it’s likely housing demand will be progressively impacted as fewer households can afford to buy,’ he said.

‘A natural consequence of worsening affordability could see demand increase for more affordable higher density housing options such as townhomes and units.’

Apartments are still expensive in Sydney with a median price of $837,169. 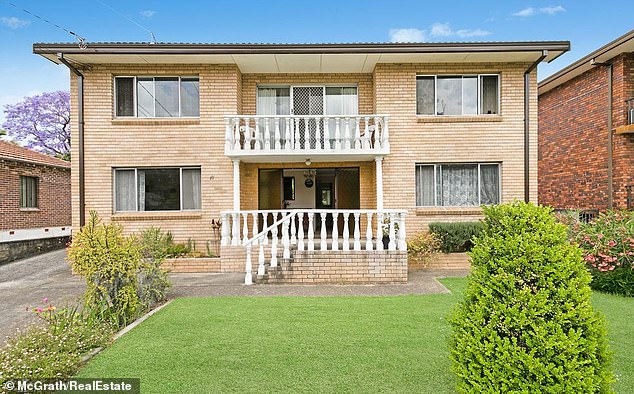 In Sydney, median house prices rose by an even more dramatic annual pace of 30.4 per cent to $1,360,543 (pictured is a house at Ryde in Sydney’s north on the market for $2.4million)

But the 15.2 per cent annual increase was only half that of houses.

Canberra, while expensive for houses, is much more affordable for units, with a mid-point price of $568,308 after a 14.7 per cent annual rise.

In Melbourne, the middle point for apartments is $626,449, with prices climbing by a more subdued 9 per cent over the year.

But this is still close to the six threshold, which the Australian Prudential Regulation Authority deems to be risky.

On November, new APRA lending rules came into effect requiring the banks to assess how a borrower would cope with a three percentage point increase in mortgage rates.

Previously, they had to model a 2.5 percentage point increase.

Mr Lawless said the banking regulator’s intervention was likely to eventually slow down the overall housing market, with both the Commonwealth Bank and Westpac forecasting price falls in 2023 and slower growth in 2022.

In some cities, apartment prices have increased at a faster pace than houses, as affordability was squeezed in an environment of record low interest rates.

But in Brisbane, there has been an even bigger gap between the price growth for different types of properties compared with Sydney and Melbourne. 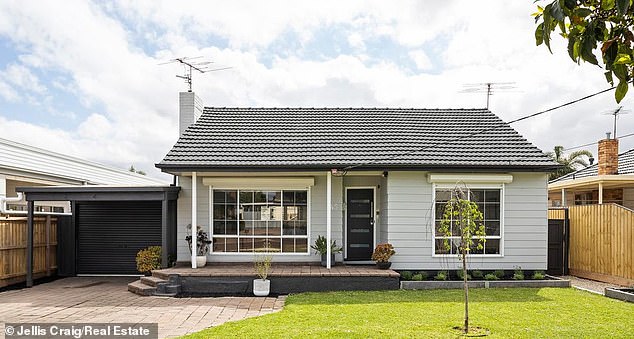 5 bold predictions for Packers against 49ers

Could the Giants swoop in and pair Brian Flores with Deshaun Watson?

‘Would be a coup' – Sheffield Wednesday enquire about Sunderland target: The verdict

Stuck on re-tweet: Some East African sunbirds have been singing the same song over and over again for up to a MILLION years, researchers find

University of California, Berkeley-led researchers studied 'sky island sunbirds'These live in mountain forests, isolated for some thousands to millions of yearsInstead of having changed gradually over time, the birds still sing similar songsIn fact, the changes they do exhibit are not correlated with time in isolationThe team think the songs undergo long periods of stasis with pulses of change Read more »

Manchester City’s relentless form under Pep Guardiola has seen the manager rewarded with another manager of the month award, but he’ll need to stay at the Etihad Stadium a lot ... Read more »

Exciting Chelsea academy prospect Lewis Hall has been added to the Chelsea squad on FIFA 22 following the latest update. The 17-year-old has been at Chelsea since the age of ... Read more »

After Sunday’s 118-112 victory (box score) in Sacramento, the young Houston Rockets have suddenly won two of their last three games. But the biggest reason for the mini-surge is a ... Read more »

Dundee boss James McPake admits he will “always be interested” when Leigh Griffiths becomes available. The Celtic loanee is set to become a free agent with his Parkhead contract ripped ... Read more »

Chelsea manager Thomas Tuchel has been named the men’s coach of the year at the FIFA Best Football Awards, among several honours for the club. © PA Images Thomas Tuchel ... Read more »

Kevin De Bruyne and Ruben Dias have both been named in the Fifa Fifpro World XI for last year. The two Manchester City stars were chosen by their fellow professionals ... Read more »

Simon Jordan believes that Everton should be considering Steve Cooper as a potential replacement for Rafael Benitez at Goodison Park. The former Crystal Palace owner rattled off a list of ... Read more »

‘Can't quite understand the logic', ‘Unbelievable' – These Swansea City fans are not happy as outgoing transfer confirmed

'From Reconstruction to Jim Crow to the present day, our economy has never worked fairly for black Americans or really for any American of color,' Yellen saidIn words before the National Action Network's Annual King Day Breakfast, Yellen recalled a portion of King's 'I Have a Dream' speech The secretary then highlighted the work of the Biden administration to address the racial wealth gapShe said the Treasury had completed its first-ever equity review, and had hired the most diverse leadership, including hiring the first counselor on racial equity Read more »

The CEOS of some of America's largest airlines wrote to federal government officials warning that a new 5G service could cause disruptionsIn the letter to federal officials, the CEOs wrote that when AT&T and Verizon's new service goes live on Wednesday it could affect commerce The FAA has warned that potential interference could affect sensitive airplane instruments such as altimeters and impact on low-visibility operations 5G could also affect airplane's safety features Read more »

NSW’s Chief Health Officer Kerry Chant has warned that Covid-19 deaths are set to climb in New South Wales over the few days as the full impact of last weeks ... Read more »

The Premier League never fails to disappoint with some of the surprises it throws at us, but perhaps one of the least surprising topics was the sacking of Rafa Benitez. ... Read more »

McShane to lead Tigers in 2022

Paul McShane is aiming to build on the legacy left by predecessor Michael Shenton after being named Castleford Tigers captain ahead of the 2022 Betfred Super League season. The England ... Read more »

‘Why would you?', ‘We have nothing' – Many Everton fans left in disbelief by club announcement

Ulster into Euro knockouts as Saints all but out

Ulster ensured their place in the Heineken Champions Cup round of 16 after a Mike Lowry-inspired 24-20 bonus-point success over Northampton Saints at Franklin’s Gardens.  Full-back Lowry scored two tries ... Read more »

'Wazza is all about details - I was so impressed': Rio Ferdinand reveals Wayne Rooney the manager is 'different to who I saw grow up at Man United' after visiting him at Derby as he backs his old team-mate to make a stunning return to Everton

Dr Anthony Fauci warns that the Omicron variant may not be the final strain of Covid, as some believeThe variant has quickly infected millions of people worldwide at a pace faster than previous strainsWith so many cases, some experts are hopeful the variant will run out of people to infectFauci warns that a new strain that is resistant to natural immunity provided by infection could emerge and keep the pandemic going  Read more »

Former Aston Villa defender Alan Hutton has questioned whether Dean Smith has the same pull in the transfer market as Steven Gerrard, who Christian Purslow claims has the ability to ... Read more »

© Provided by Football League World Championship – Millwall v Birmingham City Nottingham Forest are yet to make a breakthrough as they look to seal a deal for Millwall’s Jed ... Read more »

Manchester City have faced questions over their striking options since Sergio Aguero’s departure but have not signed an answer yet. The tricky Argentine was unplayable on his day and has ... Read more »

Nottingham Forest’s January window has been impressive so far but it appears they’re chasing one more deal to cap it off in style.  The links to Millwall talisman Jed Wallace ... Read more »

Jim Harbaugh Is The Listed Favorite For 1 NFL Job

Philippe Coutinho and hat-trick hero Jack Harrison are two of FIVE new entries, while Kevin De Bruyne also makes the cut again - our Premier League POWER RANKINGS after this weekend's round of fixtures