Andy Murray is not giving up after suffering another early exit from a tournament in Vienna. The former world No 1’s comeback has been gaining momentum in recent weeks, but he lost out to Carlos Alcaraz in the second-round of the Erste Bank Open – his third consecutive tournament losing before the quarter-finals.

Murray is still continuing his return to the top level of tennis after undergoing a hip resurfacing surgery in 2019.

The 34-year-old has had a stop-start few seasons, being unable to play the Australian Open in 2020 because of a pelvic injury, and again this year after testing positive for Covid and being “unable to find a workable quarantine period”.

He also struggled with a groin injury earlier this year, and withdrew from a tournament after the birth of his fourth child, making his proper return on the grass courts in summer.

Murray has since started to look something like his old self on court, but has found himself running into top young players early on in tournaments and suffering early exits.

JUST IN: Emma Raducanu opens up on pressure and ‘having a target on her back’ 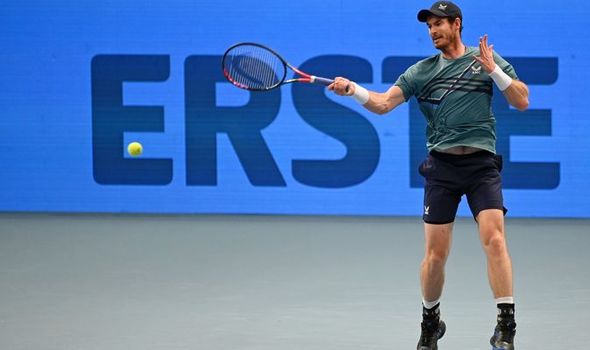 The current world No 156 lost to the likes of Miami Open champion Hubert Hurkacz, top 50 player Frances Tiafoe, and world Nos 3 and 4 Stefanos Tsitsipas and Alexander Zverev in recent months.

Proving he was continuing to get better with each tournament, Murray got revenge over Tiafoe in Antwerp last week, before finally beating Hurkacz in their third meeting in just over two months on Monday (October 25) in Vienna.

However, it was a reversal of fortune in the second round, as the Brit lost to Carlos Alcaraz in the Erste Bank Open second-round on Wednesday night (October 27), just weeks after beating the Spanish teenager in Indian Wells.

It was the second week in a row that Murray crashed out of a tournament in the second-round, but the 46-time title winner sounded defiant despite losing in straight sets to the world No 42.

Zverev sets record straight on relationship with Tsitsipas after feud

“I’m not going to keep losing in the second and third round of tournaments,” the 34-year-old declared, following his loss to Alcaraz.

“I will get better and I will improve and I will break through in one week, or two weeks, or a few months.”

Murray has been looking like he is getting increasingly close to a breakthrough moment in his comeback, improving his level week-on-week, and proving he can recover from previous losses against some of the tour’s rising stars, beating them weeks after suffering defeat.

He added: “It will happen. I obviously would like it to be happening quicker than what it is.” 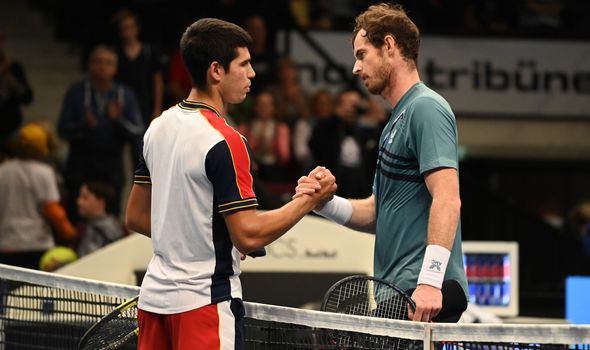 Crediting his opponent, who he had declared as one of the hard-hitters on tour, Murray sounded confident he would make it to the latter stages of tournaments if he continued to improve.

“But he did play extremely well and he’s a top young player and if you’re hitting single-digit unforced errors playing that way and with the power that he has it’s going to be tough,” he said of his loss to the 18-year-old.

“Draws have been hard, I’ve played in some tough tournaments. The draw was stacked here [in Vienna]. There were no easy matches here. It will happen sooner rather than later I think.”

Is memory loss due to aging or dementia? This important test could help

U.S. and other countries condemn Taliban over ‘summary killings' of former security forces

IT would be wrong to blame lockdown for the heart-rending fate of six-year-old Arthur Labinjo-Hughes. But there is something in it. The closure of schools at the height of the ... Read more »

Political parties in Tshwane could find themselves in the same situation as before — when the metro was put under administration in March 2020. © Copyright (c) Daily Maverick , ... Read more »

© Provided by The Guardian Photograph: Ian Forsyth/Getty Images Children in some parts of England are three times more likely to be vaccinated than others, figures from the House of ... Read more »

© Provided by Extra.ie Country music legend Garth Brooks responded to a viewer asking if he’s going to be playing a Galway gig in 2022. Garth is scheduled to play ... Read more »

Ant and Dec had a bit of fun at Boris Johnson’s expense on tonight’s I’m A Celebrity…Get Me Out of Here! The Geordie duo were talking about who was up ... Read more »

Arlene Phillips first star voted off I'm A Celebrity... Get Me Out Of Here

© Provided by The Times of India Mumbai: A senior executive in a plum posting at a large organisation in Mumbai wanted to relocate to Bengaluru to be with her ... Read more »

© Provided by The Indian Express THE Pune chapter of Indian National Society for Aerospace and Related Mechanisms (INSARM) organised a three-day national conference in Pune between December 2 and ... Read more »

© Provided by The Times of India Mumbai: The Reserve Bank of India (RBI) is likely to hold its repo rate (currently 4%) in the forthcoming monetary policy on December ... Read more »

© Provided by The Indian Express Navy Day was marked at INS Shivaji on Saturday with a number of activities on the theme of Navy Week 2021: ‘Indian Navy: Combat ... Read more »

© Provided by The Indian Express The Crime Branch busted an online extortion gang and arrested the gang leader for allegedly blackmailing at least 12 people in the last year. ... Read more »

© Provided by The Financial Express The past few years have been challenging for Max Life, with the management’s focus on simplifying the organisation structure. We hosted an investor day ... Read more »

Pension bill of PSBs may be an impediment for sale

© Provided by The Times of India Mumbai: The discovery of the new Omicron variant of the coronavirus has delayed stability in the term insurance market. Insurers, who are raising ... Read more »

The Australian and international news stories you need to know today, Monday December 6.

Giants report card: This is getting ridiculous

Grading the Giants’ 20-9 loss to the Dolphins on at Hard Rock Stadium on Sunday. Offense This has gone from bad to worse to ridiculous. No touchdowns, 250 total yards. ... Read more »

soh-2 Prices of Christmas staples ham and lechon have shot up, due to high demand amid the holiday season and the impact of the African swine fever on the sector. ... Read more »

Former Yorkshire cricket captain Darren Gough looks set to enjoy a surprise return to the county as their new director of cricket, marking his first role at the club since ... Read more »

THE parents of alleged Oxford high school shooter Ethan Crumbley were helped by a Detroit artist who reportedly let them hide in his studio's basement after they were charged with ... Read more »

Omicron means it's time to switch to N95 masks

Omicron means it’s time to switch to N95 masks The omicron variant is spreading fast. According to the World Health Organization, at least 38 countries, on six continents, have confirmed ... Read more »

© Provided by Pinkvilla Finally, Vicky Kaushal and Katrina Kaif’s royal wedding is just upon us. The couple is also starting their legendary wedding shenanigans from tomorrow (7 December) at ... Read more »

The costs of Biden's war on oil include higher gas prices

President Joe Biden speaks on the economy during an event at the South Court Auditorium at Eisenhower Executive Office Building on November 23, 2021 in Washington, DC. Alex Wong/Getty Images ... Read more »

© Provided by Cover Media Tom Holland Tom Holland and Zendaya have joked about how their height difference altered a stunt on Spider-Man: No Way Home. The real-life couple made ... Read more »

© Provided by This Is Money MailOnline logo Britain’s mutual building societies, insurance companies and co-operatives were once a potent force. A product of the Victorian era’s reforming zeal, they ... Read more »

Due to Brexit, workers who live in the EU, EEA, or Switzerland will have to recalculate the amount of “qualifying years” they have endured to see if they meet the ... Read more »

Liam Scales admitted his phone was red hot after opening his Celtic account – but he’s hoping to get the call from Ange Postecoglou for Thursday. The former Shamrock Rovers ... Read more »

Keir Starmer has urged anti-vaxxers and jab sceptics to “think again” as he prepares to get his booster vaccine. The Labour leader, who is due to have his third dose ... Read more »

© Provided by Dot Esports The final day of the first split’s regular season took place with concurrently running lobbies, so no teams would be handed an unfair advantage with ... Read more »

I’m A Celebrity… Get Me Out Of Here! has seen its first contestant, Arlene Phillips, eliminated from Gwrych Castle. The 78 year old, whose daughters recently said they weren’t “embarrassed” ... Read more »

© Provided by GamePur In Cookie Run Kingdom, there’s a very helpful mode called Tropical Soda Islands. This mode can earn you a steady stream of items. However, it isn’t ... Read more »

Sunstone Eduversity to double its 2021 growth

JSW Energy Rating: Sell- RE biz may get re-rated on rise in auction rate

Bloomberg doubles down on his most important legacy: charter schools

Everton fans to walk out against Arsenal in the 27th minute

PM Modi to inaugurate Rs 9,802 crore Saryu Canal project in UP on Dec 11