Our Yorkshire Farm followed Amanda Owen, her husband Clive Owen and their clan of nine children as they let Channel 5, into their home and gave viewers an insight into the hardships of balancing family life with the responsibilities of the farm. However, after receiving criticism the Shepherdess finally hit back.

When asked about reactions from viewers, she revealed: “It does feel like a responsibility to be what you say you are.

“Once you have the cameras in or photographers, it very easy to slip into the trying to tidy up around the edges and make everything just so,” she explained.

Amanda hit back at critics with a statement about authenticity: “But there’s a limit, there is a limit as to how much stuff you can actually chuck through a door, shove under your sofa or hide behind your cushion.” 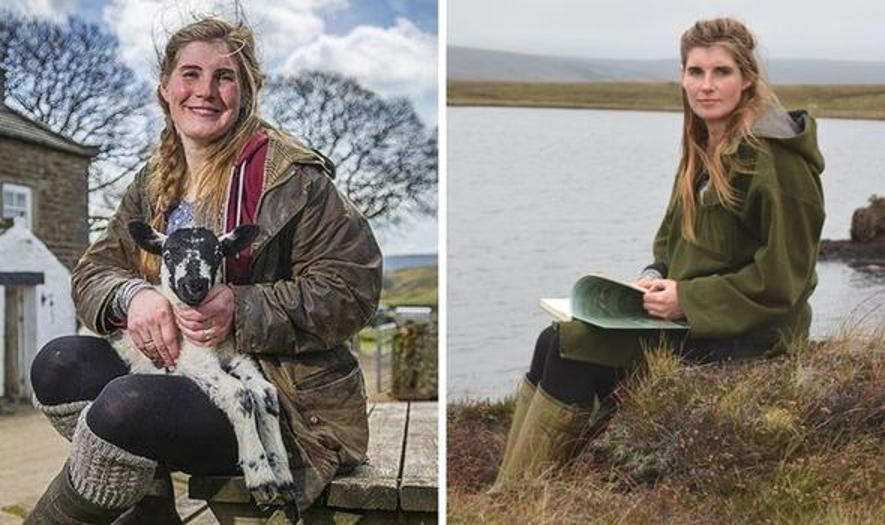 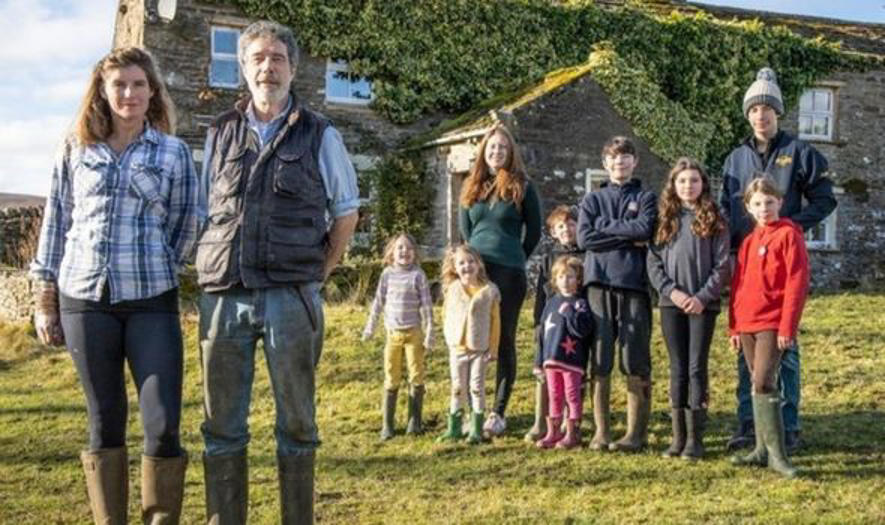 The family lives in one of the most remote parts of the country on 2000 acres of land with a flock of 1,000 sheep.

Whilst viewers saw Amanda lead a busy life, they also witnessed the children pull their weight and help out around the farm.

As the youngsters aren’t permitted to own televisions or phones, the stewardess highly encouraged them to explore the outdoors.

In the interview, Amanda continued: “We are as we are, and it’s kind of important that you are genuine. 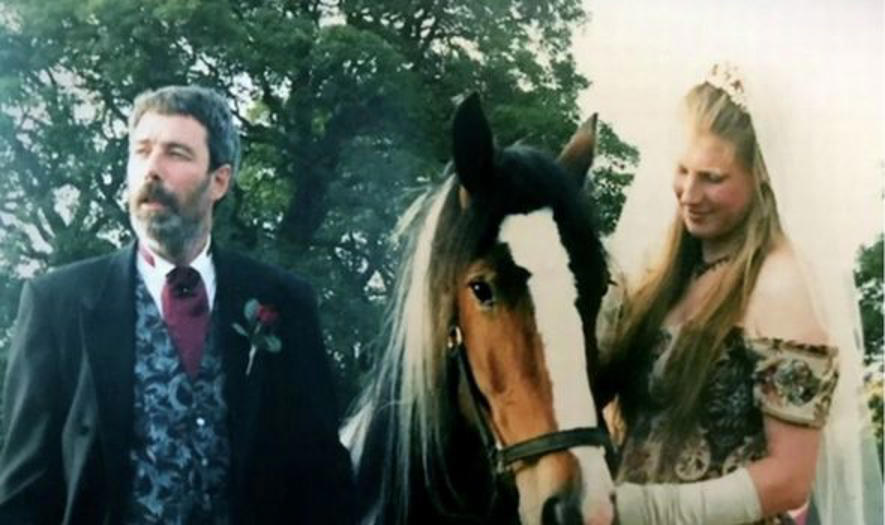 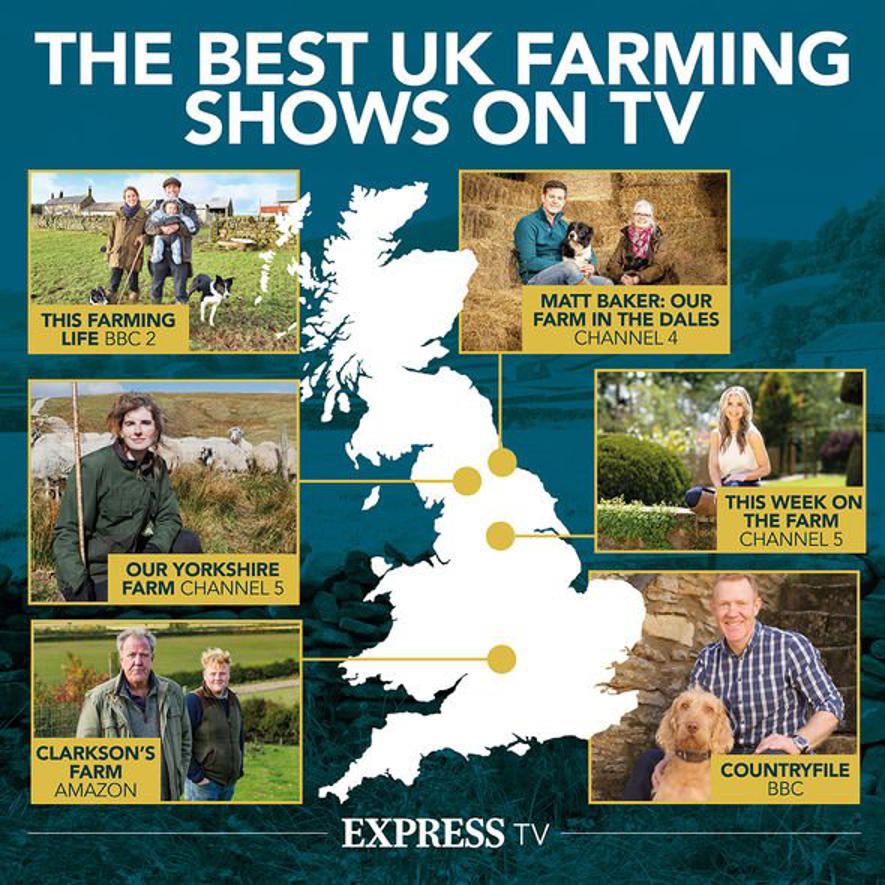 Speaking on the reaction of viewers she stated: “I like the fact that there is that interest and what you see is what you get.”

With 1,000 sheep, 40 cows, six dogs and four ponies, Amanda has received criticism from viewers for allowing her children to go horseback riding.

Amanda first met her husband Clive in 1995 when she was 21 and he was 42 running his own farm.

As she was in training to become a shepherdess she went knocking on his door to ask for a male sheep.

Amanda previously admitted the relationship was a ‘slow burn’ as they were friends before any romantic feelings and despite the age gap the pair fell in love and got married five years later.

Unfortunately, little is known about Clive as he prefers to keep away from the limelight.

Their eldest daughter Raven has left the farm and is currently at university studying to become a vet.

The upcoming season of Our Yorkshire Farm is likely to follow the Owen Family as they move out of Raveseast Farm for the first time.

Our Yorkshire Farm is available on Channel 5’s catch-up service My5.

J&J Gains Most Since January After Hiking Annual Profit Forecast

With dueling downgrades, NATO-Russia diplomacy is at a new low

World Osteoporosis Day: how to spot the bone thinning condition early, and ways to head it off with the right diet and exercise

‘We've got to build back better': SAA unlikely to rely on taxpayer money

Federal regulators are expected to authorise the mixing and matching of Covid-19 booster doses this week to provide flexibility as the campaign for extra shots expands. The upcoming announcement by ... Read more »

© Provided by Health Amazon – Design: Alex Sandoval Chances are, you’ve probably heard of the buzzy, anti-aging, skincare ingredient collagen. If you’re not super familiar with it, you should ... Read more »

White privilege: what it is, what it means and why understanding it matters

© Provided by CapeTalk © kzenon/123rf.com Tertiary education company Stadio has announced an an initiative to give shares to its graduates, which it launched on Tuesday. “In a revolutionary move ... Read more »

© Handout This handout photo from Google on July 30, 2021 shows the new Pixel 6 smartphone; Pixel phones have been seen as a way for Google to showcase the ... Read more »

© Provided by News18 Mixing Covishield and Covaxin More Effective, No Side Effects: ICMR Study A recent clinical study by a team of researchers from ICMR (Indian Council of Medical ... Read more »

These FAQs can help you know your vaginal health better

Your vagina undergoes several changes throughout your life. That is why it is important to spot the signs and symptoms to know if something is amiss, and  take appropriate care. ... Read more »

Top reasons why you should not avoid eating rice

© Provided by The Indian Express Not eating rice or cutting down its consumption is among the first things many of us want to do when it comes to shedding ... Read more »

Natural immunity or Covid-19 vaccination – what's your pick to be safe during the pandemic?

With the vaccination drive in full swing, the number of Covid-19 cases has reduced in India. But that doesn’t mean we don’t have to be cautious! It is still imperative ... Read more »

Five things that can ensure a good night's sleep

© Provided by The Indian Express Sleep is an important aspect of everyday functioning, which helps in keeping the body healthy, and the mental and emotional health of a person ... Read more »

What is panic attack? Here are common signs you must know

American singer and songwriter Miley Cyrus recently felt a panic attack was going to grip her in a middle of performance and eased her fears by talking to the audience. ... Read more »

Eoin Morgan insists that he is not immune to the axe

© Facebook. Umhlanga. JOHANNESBURG – Businesses and community members are worried about the closure of Durban north beaches following the UPL disaster. During the anarchy in July, a UPL warehouse ... Read more »

© Provided by Times Live The SA Health Products Regulatory Authority (Sahpra) on Monday announced its decision to reject the emergency use of the Sputnik V Covid-19 vaccine, citing concerns it might lead ... Read more »

Mandla Msibi: My arrest for murder was fuelled by ANC infighting

© GCIS Mandla Msibi. JOHANNESBURG – Axed Mpumalanga Agriculture MEC Mandla Msibi has spoken out about damning allegations of infighting and factionalism in the province. Msibi addressed his supporters outside ... Read more »

Legal interest groups Casac and the Helen Suzman Foundation are among the over 500 submissions received regarding the eligibility of seven shortlisted candidates for the position. In their submissions, both ... Read more »

We have not failed, load shedding is even there in Europe - ANC

© Provided by 702 In its 2021 local government election manifesto, the African National Congress (ANC) has vowed to renew itself. While delivering the manifesto, ANC president Cyril Ramaphosa admitted ... Read more »

© Provided by 702 Concerns had been raised about some components of the vaccine which could put the population at greater risk of HIV infection South Africa has one of ... Read more »

© Provided by dw.com West Bank Palestinians will now be able to cross checkpoints around the West Bank and Israel Israel said Tuesday it will give 4,000 Palestinians living in ... Read more »

© Provided by CapeTalk Education MEC Debbie Schäfer is hoping that there will be no disruptions or transport strikes as Grade 12 learners begin their final prac exams Matric exam ... Read more »

© Provided by 702 Residents in the south of Johannesburg will spend the night without electricity. This comes after the Robertsham substation caught fire on Monday night. Areas affected include ... Read more »

© Provided by SowetanLive The Constitutional Court last week upheld the commission’s appeal against a decision setting aside its decision in allowing a merger between Mediclinic Southern Africa (Mediclinic SA) and ... Read more »

Facebook to pay $14 mn in US worker discrimination suit

Steel industry should do more to give back to workers - Numsa

© Provided by 702 The Steel and Engineering Industries Federation of Southern Africa (Seifsa) say the wage increase offer it made to National Union of Metalworkers of South Africa (Numsa) ... Read more »

Covid pandemic results in loss of R2.6bn for Acsa - only its second in 28 years

More than 12,400 candidates to contest local polls in the W Cape, the highest number yet

© Provided by SowetanLive The IEC revealed on Monday that more than 12,400 candidates will contest the local government elections in the province, 5,000 more than in 2016. Monday marked ... Read more »

© Provided by Times Live Gauteng premier David Makhura has raised concerns about a possible fourth wave of Covid-19 , saying it is expected to hit the province between November ... Read more »

Ace Magashule appears in Bloemfontein High Court, claims the corruption case against him is a smear

© Copyright (c) Daily Maverick , All Rights Reserved The suspended ANC secretary-general, his co-accused and all their lawyers were in the Bloemfontein High Court briefly before 3 November was ... Read more »

© Provided by dw.com Mount Kenya (photo) is expected to be the first mountain range to lose glaciers due to human-induced climate change A new report from the UN on ... Read more »

No unconditional love for Mabuza in Atteridgeville

© Provided by SowetanLive Deputy President David Mabuza received a mixed reaction as he took the ANC’s campaign trail to Atteridgeville in Tshwane on Monday. This comes as the governing ... Read more »

© Provided by CapeTalk Columnist and political analyst Dr. Piet Croucamp says the DA is wrong for claiming that the ANC is the “common enemy” Dr. Croucamp says citizens should ... Read more »

Biotech boom: How life sciences emerged from ‘the doldrums' in Seattle and Washington state

Biden's vision for green US imperiled by Senate coal-state tycoon

5 Ways to Decolonize Your Diet And Embrace Latinx Ancestral Foodways

Evander Kane Suspended from 21 Games for Violating NHL's COVID Protocol: 'I Made a Mistake'

Yoga for osteoporosis: 5 yoga poses to strengthen your bones

DA: Millions wasted in asbestos saga could've been saved if action was taken