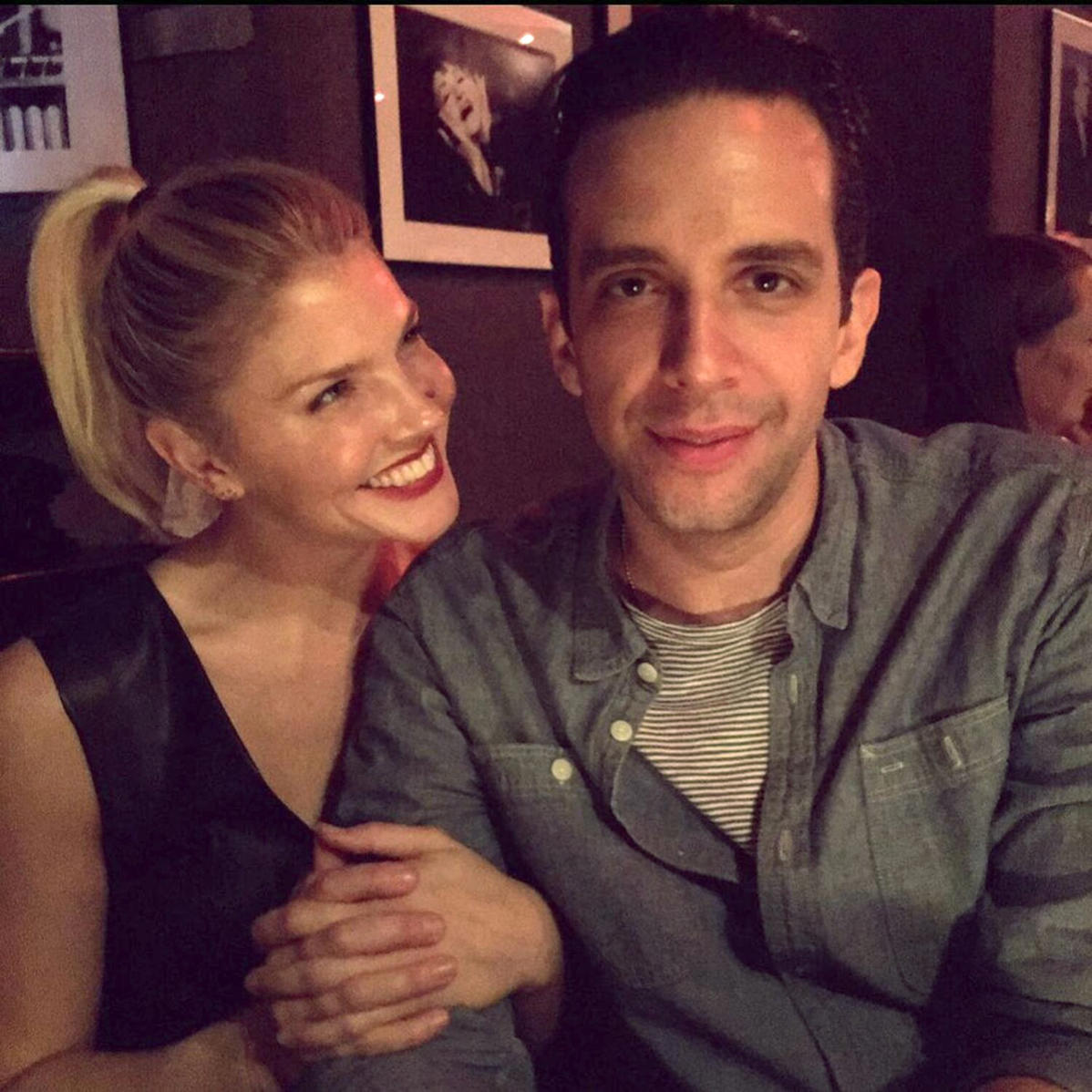 Amanda Kloots, and New York City, are celebrating Nick Cordero on his birthday.

“Happy 43rd birthday to you Nick,” Kloots wrote in a heartfelt Instagram tribute on Friday alongside a carousel of photos of the couple. “It’s really hard to not think about what we would be doing today to celebrate you. I’d probably take you for a really nice steak dinner and have some red velvet cake for dessert with Elvis!” She added, “I hope you are up in heaven having a big party with your Dad and because I’m wishing the best for you, Prince. I’m hoping you’re singing with Prince today!!! Elvis and I will be missing you today as we sing to you from Earth. If you were here I know what you’d say…

‘I’m the luckiest man on the planet. I live a blessed life.’ ❤️ I love you forever.”

“I’m completely blown away and I’m sure Nick would be too!” Kloots wrote on Instagram, alongside a video of the local news announcement about the mayor’s proclamation.

Earlier this month, the cast of Waitress debuted a special tribute to Cordero, who was one of the show’s original cast members.

A brand new pie will be featured on the diner’s menu board, titled the “Live Your Life” pie in honor of the late Nick Cordero, referencing his recorded single — which he had just begun to perform when he died last year due to complications from COVID-19. Cordero originated the role of Earl in the 2016 Broadway production.

The production shared a snap of the updated menu on Instagram, writing: “This week, we honored the memory of our beloved cast member Nick Cordero. His wife, @AmandaKloots, visited the diner as we unveiled the sign featuring ‘Live Your Life Pie.’ This special pie name, and moment in the show, will be a permanent part of every Waitress production in the world.”

A representative for the Broadway production tells PEOPLE that a line in the show will reference the “Live Your Life Pie” and that it will be in every production of Waitress, including its national tour, moving forward.

Cordero died last July at Cedars-Sinai Medical Center in Los Angeles after a months-long battle with COVID-19, during which he was put on a ventilator and had to have his leg amputated. He was 41 years old.

As information about the coronavirus pandemic rapidly changes, PEOPLE is committed to providing the most recent data in our coverage. Some of the information in this story may have changed after publication. For the latest on COVID-19, readers are encouraged to use online resources from the CDC, WHO and local public health departments. PEOPLE has partnered with GoFundMe to raise money for the COVID-19 Relief Fund, a GoFundMe.org fundraiser to support everything from frontline responders to families in need, as well as organizations helping communities. For more information or to donate, click here.

What we know about deadly prop gun shooting on 'Rust': Vigil held for Halyna Hutchins

The Sopranos spin-off show may be coming to HBO Max

Michael Bay's next movie looks like an absurdly wild ride

Jay Black Dies: Jay And The Americans Frontman Who Sang Best Known Version Of “This Magic Moment” Was 82

The money will be used to support Hutchins’ family during this difficult time, the organization said. Some 1,300 people have donated money in the past 24 hours. Hutchins had a ... Read more »

RSL falls 1-0 on the road to Chicago Fire, remains below playoff line

© Mike Dinovo-USA TODAY Sports Real Salt Lake dropped a 1-0 result on the road to the Chicago Fire thanks to a goal from Robert Beric in the waning minutes ... Read more »

Outrageous Fortune actor Kirk Torrance is in a starring role in The Pact, which promises to show him like never before. The new TVNZ six-part series tackles the serious topic ... Read more »

Alec Baldwin was handed a weapon loaded with live ammunition by an unwitting assistant director who yelled “cold gun” in the moments before the actor fatally shot a cinematographer, police ... Read more »

Alec Baldwin shooting: 24-year-old gun worker Hannah Gutierrez 'wasn't sure' if she was ready for role

The armourer on the movie set where Alec Baldwin fatally shot a cinematographer is a former actress and model, and daughter of a legendary Hollywood gun expert who “grew up ... Read more »

Halyna Hutchins’ husband has paid a glowing tribute to the cinematographer. Matt Hutchins has taken to Twitter to heap praise on Halyna, who passed away at the age of 42 ... Read more »

Shortland Street has one of our most successful actresses returning to the show and one of our biggest up-and-comers also joining the ranks. Multi award-winning Sara Wiseman is joining the ... Read more »

British talk show mega-star Graham Norton is going to trick or treat you on Halloween in the guise of his new wine, He-Devil. “I launched my very first wine with ... Read more »

British singer Rita Ora has an eye for New Zealand talent. First, she had her head turned by director Taika Waititi and now she is turning her red chair for ... Read more »

Test your brains with the Herald’s morning quiz. Be sure to check back on nzherald.co.nz at 3pm for the afternoon quiz. To challenge yourself with more quizzes, CLICK HERE. Read more »

© Carl Gulbish While the Supporters’ Shield was officially awarded to New England Revolution, a 1-0 win over Nashville SC on Saturday night put the Philadelphia Union one place behind ... Read more »

© Brace Hemmelgarn-USA TODAY Sports It’s been said the last few matches, but this math against Minnesota United was one of two, extremely critical, matches for LAFC. Coming into the ... Read more »

© Photo by John Powell/Liverpool FC via Getty Images Ozan Kabak was brought in as an emergency reinforcement this past January to help Liverpool cope with a rash of injuries ... Read more »

Recap: D.C. United a disaster in 6-0 loss at NYCFC

© Vincent Carchietta-USA TODAY Sports In one of the biggest games of the season, D.C. United produced its worst night at the office in 2021, falling 6-0 to NYCFC. United ... Read more »

5 Major Reasons To Add This Spot Treatment To Your Cart

© Provided by Cosmopolitan Philippines Wouldn’t it be nice if a pimple would just disappear upon command? Sadly, this isn’t the case. We could either wait for it to heal ... Read more »

Thousands of participants will be running Sunday in the highly anticipated Rock ‘N Roll Running Series. People are traveling from across the globe to take part.  “We can feel the ... Read more »

The rapper Tyga was arrested Tuesday on suspicion of domestic violence with a former girlfriend, then released after posting $50,000 bail. Tyga, 31, turned himself in at the Los Angeles ... Read more »

Jirisan Takes on a New Kind of Mystery From Kingdom's Creators

Second annual Bluegrass in the Park

MERIDIAN, Miss. (WTOK) – Music lovers everywhere attended a concert that was too good to miss in Clarke county– for a fun filled day. © Provided by Meridian WTOK-TV Second ... Read more »

© Provided by People Ryan Phillippe/Instagram Deacon Phillippe is all grown up! Reese Witherspoon and Ryan Phillippe both shared touching Instagram tributes to their son in honor of his 18th ... Read more »

Gal Gadot might be featuring her family in the upcoming Wonder Woman 3. After it was announced that Gadot would be returning to play everyone’s favorite female superhero, the 36-year-old ... Read more »

Sweating benefits your body by helping keep it cool, but what if you sweat too much?

Sunrise breathwork meditation and exercise on a Hong Kong hilltop combines fitness, mind and body detox, and a reset of your circadian clock

Alec Baldwin shooting: Halyna Hutchins' husband says 'our loss is enormous' as he pays tribute after cinematographer's death on set of Rust