Amanda Kloots is pushing for a posthumous Grammy Award for her late husband Nick Cordero.

The Talk co-host, 39, reflects on Cordero’s final work, his one-man-show Live Your Life and the posthumous album of the same name, in a video for the Grammy’s FYC campaign. (PEOPLE has an exclusive look!)

She and Live Your Life producer Michael J. Moritz Jr. recall the late Broadway actor’s decision to make his own show, after starring in such shows as Rock of Ages, Bullets Over Broadway, Waitress and A Bronx Tale.

“After A Bronx Tale closed, he just was like, ‘I want to do my own show. I want to do a one-man-show and have some of my original music in it, but also tell the story of who I am, my life and what brought me here,'” Kloots recounts in the video.

Cordero was joined onstage by friends and special guests Zach Braff, Kathryn Gallagher, Sara Chase and Drew Gehling. He also had ambitions of touring with the show, which he performed only twice before the COVID-19 pandemic shut down Broadway and the theater industry.

RELATED: Nick Cordero Gets Mayoral Proclamation on What Would Have Been His 43rd Birthday 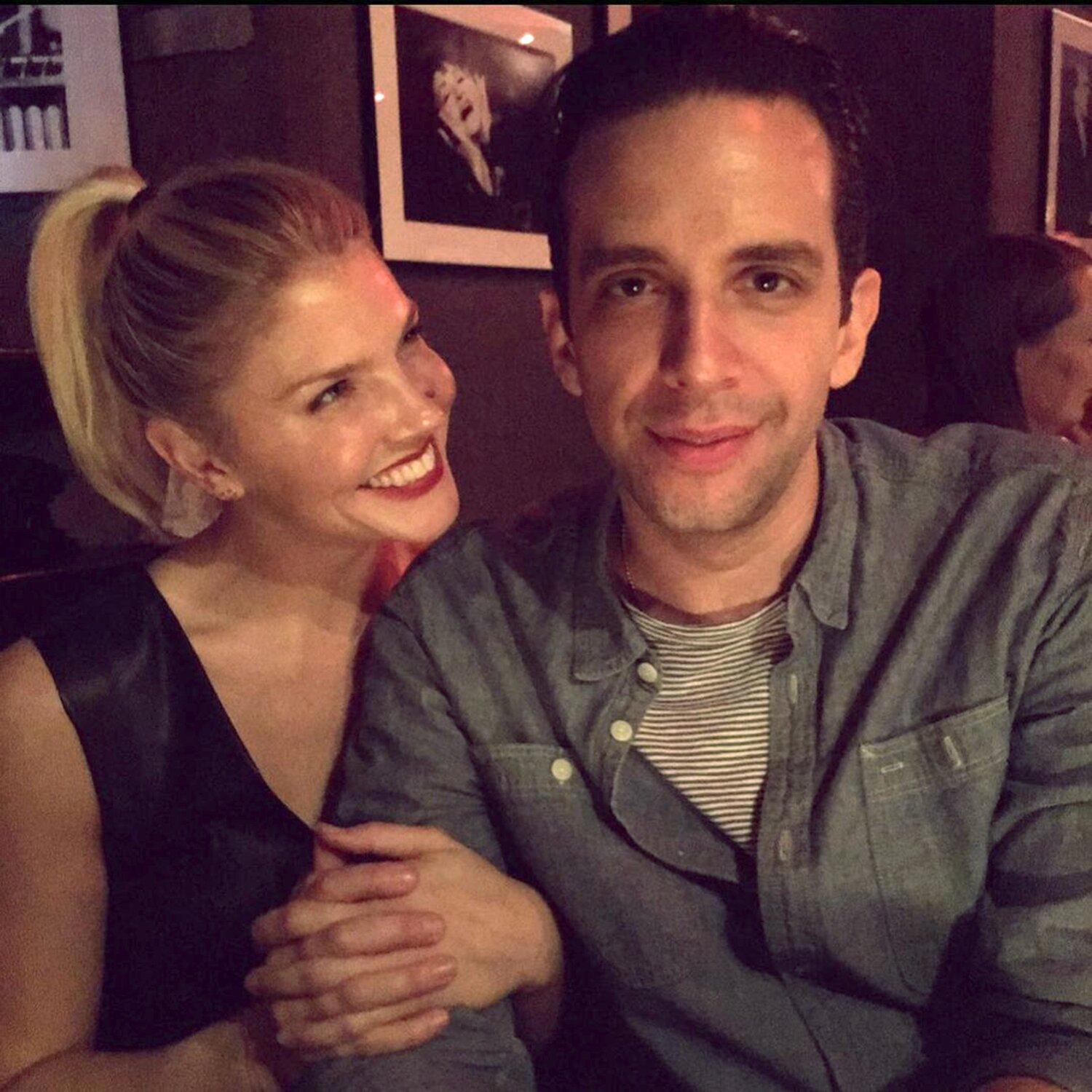 “When we were putting together the show, Nick just really had a story to tell, about his life and about his growing family and about Amanda, and he just wanted to tell that story through song,” Moritz says. “It was just such a diverse grouping of songs, along with some of his original music as well. We closed the show with Nick’s song ‘Live Your Life.'”

Although Cordero never had a chance to record an album around the show like he wanted to, Moritz reached out to Kloots after his death to let her know they still had archival recordings from the show.

They put the songs together for the album Live Your Life, which dropped posthumously on Cordero’s birthday in September 2020.

“I think what this album is so beautiful at is telling a story. You can listen to it from top to bottom and you understand who Nick is, why he did this, why he loved music, where he came from, the ups and downs of being an artist, of being a musician and being a creator,” Kloots says. “And then, he finishes it with ‘Live Your Life,’ and I mean it’s so poetic now.”

Kloots has since found comfort in the album, which she frequently plays for her and Cordero’s 2-year-old son Elvis Eduardo. “I was just floored at the time because there’s just something so special about having someone’s voice after they’re gone, she adds.

“And it’s so wonderful to listen to this album now, because feel like I play it in the car a lot, so I feel like Nick is in the car with me,” Kloots explains. “And Elvis now knows his dad’s voice because he hears it all the time and because we play it all the time. Now, Elvis adds in the things that Nick does, it’s so cute. And it’s just so special to have this recording, this beautiful moment captured in time.” © Amanda Kloots/Instagram “It’s just so special to have this recording, this beautiful moment captured in time,” Amanda Kloots says of late husband Nick Cordero’s album Live Your Life, which is eligible for a posthumous Grammy

Cordero died at age 41 on July 5, 2020, following 90 days in the hospital from COVID-19 complications, for which he previously underwent a medically induced coma and a leg amputation.

Factbox: How cruises are trying to keep U.S. passengers safe from COVID-19

The Justice Department is closing its investigation into the 1955 murder of Emmett Till, whose abduction and vicious assault united the civil rights movement, the department announced Monday. Till’s surviving ... Read more »

Chicago police were investigating a shooting at a Near North Side hotel Sunday night that caused damage to a guest room at the hotel but no injuries. Officers responded to ... Read more »

A Michigan prosecutor says authorities at the high school where four teenagers were fatally shot last week could have searched the suspect’s locker and backpack before the gunfire began. Oakland ... Read more »

Bitcoin trial: Defendant wins dispute over $50B in Bitcoin

NEW YORK (AP) — Craig Wright, a computer scientist who claims to be the inventor of Bitcoin, prevailed in a civil trial verdict Monday against the family of a deceased ... Read more »

Chris Cuomo to sue CNN for $18m left on his contract, claims boss knew knew about his involvement in brother's scandal

Former CNN star anchor Chris Cuomo is preparing to sue his former employer for US$18 million left on his contract on the grounds that CNN president Jeff Zucker knew of ... Read more »

Who Is Princess Charlene and Why Are Royal Watchers Concerned About Her Right Now?

Sure, the members of the British Royal Family are pretty used to making headlines, but lately, we’ve been closely following a different—and much lesser-known—royal: Princess Charlene of Monaco. How come? ... Read more »

NHL displays thorough lack of imagination in its head-coaching search

In 2011, critically acclaimed television writer Andy Greenwald wrote a piece for Grantland titled The HBO Recycling Program. The basic premise of the piece is that HBO, despite boasting a ... Read more »

Grande Prairie surgeon Dr. Wynand Wessels tied this noose and taped it to the door of an operating room in 2016. (Submitted by Dr. Carrie Kollias – image credit) A ... Read more »

Asmae Danouj, left, and Justine Petrucci reflect on how the 32nd anniversary of the Polytechnique massacre fuels their desire to inspire a new generation of women engineers and continue taking ... Read more »

Public Safety Minister Mike Farnworth says the scale of the flood damage is extraordinary after visiting the areas Friday. He says the province will now move into recovery and debris ... Read more »

Mike Tindall has shed a light on just how close the royal family is, saying that he and his cousin-in-law Prince William, and their young children, all get on incredibly ... Read more »

Trump came in contact with 500 people between first positive test and hospitalization: report

Former President Trump came in contact with more than 500 people between the day he initially tested positive for COVID-19 and his eventual hospitalization, according to a report by The ... Read more »

HBO's 'The Forever Prisoner': The 9/11 suspect who was the 'origin story of America's failure' at Guantanamo Bay

A new HBO documentary, The Forever Prisoner from acclaimed filmmaker Alex Gibney (streaming Monday, Dec. 6 at 10 p.m. ET on Crave in Canada), is a gripping tale of the ... Read more »

1 / 5Home Explosion FlintEmergency personnel are shown at the scene of a fire and explosion at a home in Flint, Mich., Monday night, Nov. 22, 2021. Three people were ... Read more »

Boise man charged with attempted murder after shooting in Nampa

A 33-year-old Boise man was taken into custody early Monday morning and faces a felony charge after police said he shot someone in Nampa. Joseph B. Dirilo was charged with ... Read more »

The family of Emmett Till announced Monday that the Department of Justice has formally closed its second investigation into the 1955 murder of Emmett Till. Why it matters: The DOJ ... Read more »

Illinois brothers plead guilty to charges in US Capitol attack on Jan. 6

CHICAGO — Two Illinois brothers pleaded guilty Monday to federal charges for their participation in the Jan. 6 insurrection at the U.S. Capitol. Mark Kulas Jr., of Lake Forest, and ... Read more »

Prosecutors are no longer seeking the death penalty for an Indianapolis man accused of fatally shooting a Southport police officer who tried to help him after a crash on the ... Read more »

'I'm A Celebrity': Kadeena Cox is second campmate voted out of the castle

Kadeena Cox has left the castle. (ITV) Kadeena Cox has become the second celebrity voted out of I'm A Celebrity 2021. The Paralympian who has MS said that she had ... Read more »

Jussie Smollett trial: Star testifies at his trial, accused of lying to police

Former “Empire” actor Jussie Smollett denied Monday that he staged an anti-gay, racist attack on himself in downtown Chicago, testifying at his trial that “there was no hoax.” Smollett took ... Read more »

Illustration shows representation of cryptocurrency Bitcoin By Jonathan Stempel (Reuters) – A computer scientist who has claimed to be the inventor of bitcoin largely prevailed on Monday in a Florida ... Read more »

The USS Arizona Memorial can be seen from a shuttle boat during the 75th anniversary of the attack on Pearl Harbor in Honolulu, Hawaii. By Kia Johnson (Reuters) – The ... Read more »

I'm A Celebrity contestants get emotional after unlocking letters from home

I’m A Celebrity…Get Me Out Of Here! contestants were emotional after they completed a challenge that unlocked their coveted letters from home. During Monday night’s episode, the famous faces were ... Read more »

The Wallen controversy gave country music a real, obvious chance to grow. Instead, it allowed the status quo to triumph again. Read more »

LIVERPOOL, England (AP) — Demarai Gray smashed home a long-range strike in the second minute of stoppage time to earn Everton a 2-1 victory over Arsenal and end the team’s ... Read more »

Racial pay gaps are an issue in every industry. Nowhere is it worse than in influencer marketing, a new study says.

Man admits to another killing just before execution

A Virginia couple was heartbroken after they lost their 10-year-old daughter to COVID-19. They quickly pulled their youngest child from school and got him vaccinated.

Chargers' defense finally rises to occasion when needed most

Opinion: Diplomatic boycott of Beijing Olympics is right way for US to protest abuses

Eagles ahead of schedule under rookie coach Nick Sirianni