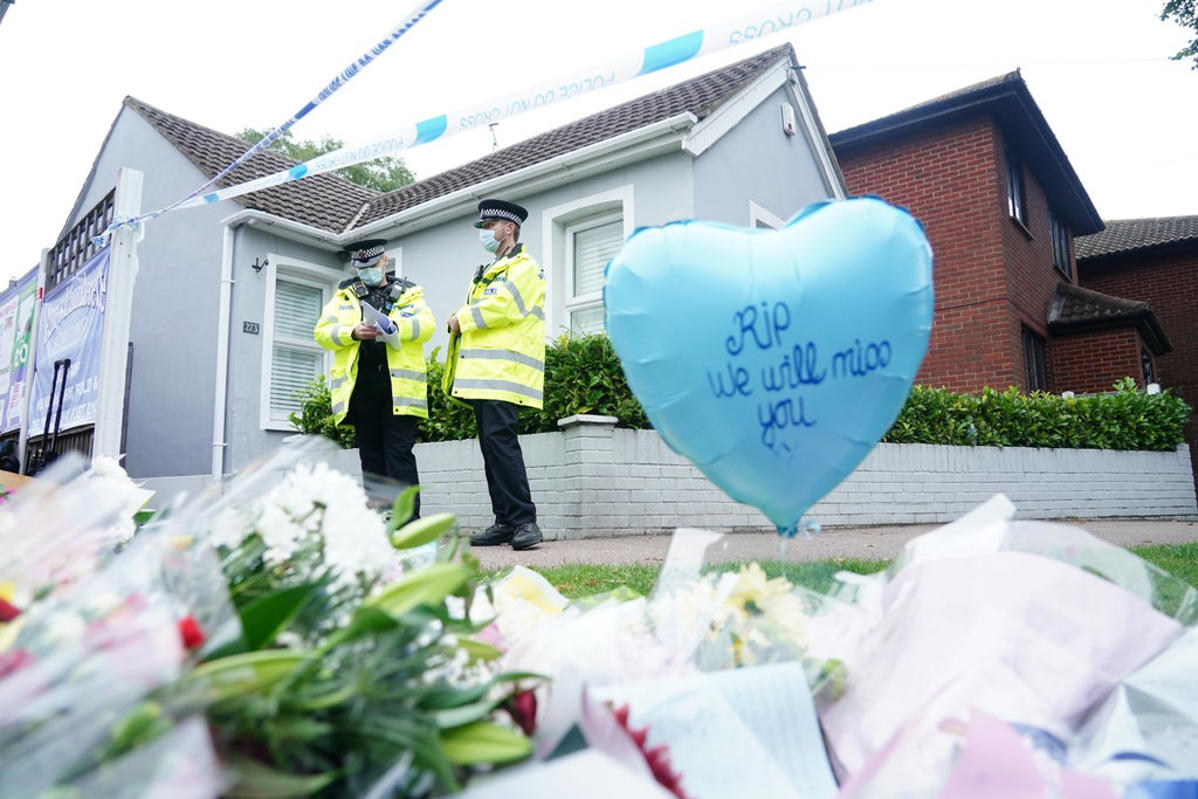 The Home Secretary has said security measures will be put in place to ensure MPs can continue to meet constituents safely following the murder of Conservative politician Sir David Amess.

A former minister called for face-to-face meetings to be suspended pending a security review after long-serving MP Sir David was fatally stabbed on Friday while meeting constituents at Belfairs Methodist Church in Leigh-on-Sea near Southend.

But Priti Patel said it is possible to strike a balance between the safety of MPs and carrying out the democratic process in-person, as she urged elected representatives not to be “cowed” by those threatening to “stop us from functioning”.

Ms Patel, who laid flowers at the site of Sir David’s killing alongside the Prime Minister, Labour leader Sir Keir Starmer and Commons Speaker Sir Lindsay Hoyle on Saturday morning, told broadcasters: “We are open to surgeries, doing our job. We will continue to do that.

“That is why there are measures under way right now – I convened meetings yesterday, I’ve been with the Speaker of the House, and with the police and our security services to make sure that all measures are being put in place for the security of MPs so that they can carry on with their duties as elected democratic members.”

Her comments come after Tobias Ellwood, a former Tory defence minister, said physical meetings with voters should be paused while MPs await the result of the Home Secretary’s call for police forces to review security arrangements.

Local police forces are contacting every MP to discuss their personal safety and the security of any events they plan to attend.

The chairman of the Commons Defence Committee, who was hailed as a hero for his attempts to save the life of Pc Keith Palmer during the Westminster terror attack, tweeted: “MP engagement with the public… is a vital part of our work – our accessibility with the public.

“Until the Home Secretary’s review of MP security is complete I would recommend a temporary pause in face-to-face meetings.”

MP engagement with the public:

This is a vital part of our work -our accessibility with the public.

Until the Home Secretary’s review of MP security is complete I would recommend a temporary PAUSE in face to face meetings. pic.twitter.com/TUgf5zYTQP

But former Cabinet minister David Davis said suspending public meetings with MPs would be “a terrible reflection of what David stood for”.

He told Sky News: “Sure, we should be cautious, maybe we should do things to ensure the people who come to see us are bona fide, but I think actually pausing it would be a bad idea.

“It would be a terrible reflection of what David stood for – David himself was the ultimate constituency MP.”

Meanwhile, the longest continuously serving female MP, Harriet Harman said she would be writing to the Prime Minister urging him to back a Speaker’s Conference to look into what needs to change to ensure parliamentarians are safe in their constituencies.

Speaking to the BBC, the veteran Labour politician said: “We cannot have the death of an MP being a price worth paying for our democracy.”

She added: “I don’t think anybody wants to go to a situation where the police are vetting individual constituents who come and see us, but I’m sure there is a safer way to go about our business.

“That’s why I’m proposing we have a Speaker’s Conference, which is something that happens only once every 10 years or so where there is a major issue for Parliament and our democracy, and the Speaker brings together the parties and the authorities and comes up with recommendations.

Conservative MP Kevin Foster, who represents Torbay, said it is “not practical” to have airport-style security at MPs’ surgeries.

“Inevitably some have asked what this means for accessibility of residents to MPs, but conducting constituency surgeries is a core part of the role, being accessible to those who may need your urgent help, hence David was doing his,” he said.

“It is simply not practical to have airport-style security, which we sadly need to have at the Houses of Parliament, when out and about in the community you represent, including in the church halls I use for some of my surgeries.

“My team do have to deal with a small number who believe they are entitled to abuse them when doing their jobs but have received excellent support from our local policing teams in response.”

Defence minister James Heappey, the Conservative MP for Wells, said: “We sit in libraries, churches and community centres hoping to help constituents who need us.

“Tweaks to security might be necessary but nothing can fundamentally change: those surgeries are foundations on which service as MP is delivered.”

One in three Norwegians is worried that the elderly people they know are lonely, new survey shows

In a Red Cross survey, one in three Norwegians says that they are worried that the elderly in their family or circle of friends are lonely. The youngest are most ... Read more »

© Provided by Firstpost Why both Akhilesh Yadav and Yogi Adityanath think they are front-runners in 2022 UP Assembly polls February 2022 is crucial for the Bharatiya Janata Party (BJP) ... Read more »

© Provided by India Today The Rashtriya Swayamsevak Sangh (RSS) claims to have the backing of 2.5 million cadre in Kerala, but the BJP has not been able to make ... Read more »

© Provided by India Today On December 2, the Jaipur police apprehended Jayesh Ravji Sejpal, 50, from a small hotel in Surat with the help of the local police, putting ... Read more »

Montréal Massacre anniversary: The media must play a key role in fighting femicide

On Dec. 6, 1989, an act of violent misogyny killed 14 young women at École Polytechnique at Université of Montréal. © THE CANADIAN PRESS/Sean Kilpatrick People take part in a ... Read more »

FORMER The Only Way Is Essex star James Argent has been spotted looking unrecognisable as he stepped out on his 34th birthday. The reality TV favourite was photographed as he ... Read more »

© Provided by Daily Mail MailOnline logo An outlaw bikie gang is using an online begging bowl to help pay the legal fees of their ‘brothers’ who are charged with ... Read more »

Independence police are asking for the public’s help finding a woman experiencing homelessness who has been missing for more than a week. Paula Clark, 68, was last seen at Centerpoint ... Read more »

© Independent Breaking News Commons Speaker Sir Lindsay Hoyle has said he will raise “deeply concerning” allegations of drug use in the Palace of Westminster with police. From news to ... Read more »

The Santa Claus rally in the stock market could stumble this year as Fed hawkishness and rich valuations spook investors, Bank of America says

French Europe minister Clement Beaune has urged the European Union to take retaliatory measures against the UK if the row over granting licenses to its fishermen cannot be resolved by ... Read more »

© Mikhail Svetlov/Getty Vladimir Putin It comes as US intelligence sources warned that Russia is poised to attack the country next year with as many as 175,000 troops, citing a ... Read more »

Feeling burnt out? Try these 13 toaster hacks to get your morning going

Too many crumbs near a toaster’s heating element could result in a fire. Getty Images You may eat toast for breakfast every day or just have it on occasion but ... Read more »

President Joe Biden has a favorite story about his long relationship with Israel. For decades, he has been publicly recounting his 1973 meeting with then-Israeli Prime Minister Golda Meir — ... Read more »

In a worrying developemnt, seven persons from Pune district have tested positive for Omicron variant of coronavirus, according to Maharashtra health officials. They include a woman who came from Nigeria ... Read more »

© Provided by GamePur Fortnite Chapter 3 has brought in a whole new map, and thanks to leaders like iFireMonkey, we can take a good look at it before the ... Read more »

Resist the FOMO. An asset manager has created an ETF for 'genuine investments' that shuns market crazes like crypto and meme stocks.

As young voters ditch Facebook, politicians are using youth media like JOE to connect on TikTok and Snapchat

From Barack Obama’s deft use of social media to capture the White House in 2008 through to Donald Trump’s win in 2016 and Jeremy Corbyn’s “youthquake” campaign of 2017, Facebook ... Read more »

© Andrew Harnik The current case before the court concerns a Mississippi law that bans abortion after 15 weeks of pregnancy (Andrew Harnik/AP) A resurgent anti-abortion movement in the US ... Read more »

© Paul Nicholls london-march-against-trophy-hunting52.jpg Hunters will finally face a total ban from bringing trophy kills back to Britain, it has been reported. The Mail on Sunday revealed that ministers will ... Read more »

Motherwell striker Tony Watt’s finish on Saturday pointed towards a man full of belief in his top form, according to Michael Stewart. The 27-year-old made it nine league goals for ... Read more »

No Christmas party for Ministry of Justice, Dominic Raab reveals

Dominic Raab said the MoJ would have ‘appropriate drinks at a smaller scale’ this year Deputy Prime Minister Dominic Raab has said he will not be holding a Christmas party ... Read more »

ANTI-LOCKDOWN protesters have been out in force across Europe as the virus returns with a vengeance ahead of Christmas. More than 2.5million cases have been recorded in the past week ... Read more »

Rural retirees ‘can end up in unsuitable, unsafe homes'

Old age pensioners, Hastings – Heathcliff O’Malley Elderly people can end up in oversized or unsafe homes if they retire to the countryside, a think tank report has said. The ... Read more »

We need to be a little bit smarter about how we control the ball, says Jake as Bulls aim to fix scrum

© Provided by Independent Online (IOL) Cape Town — Signing a few tighthead props — and a couple of new players in other positions — will be one of the ... Read more »

While researchers are warning that it might be too early to tell, doctors are seeing a significantly different clinical profile in their patients admitted for Covid in Tshwane hospitals – ... Read more »