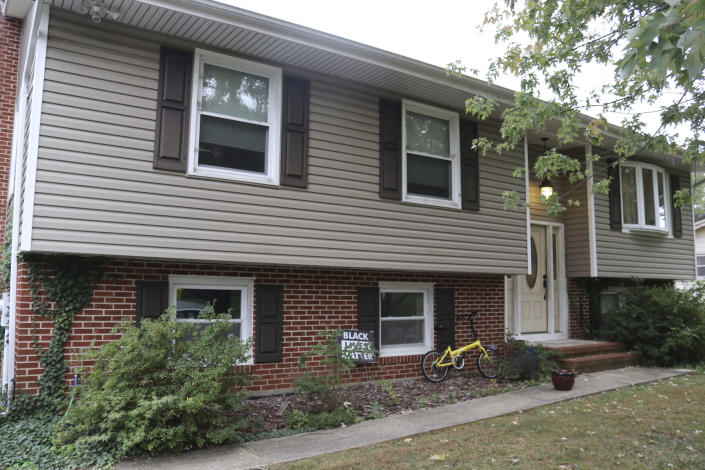 Lawyers for a Maryland woman who has been jailed along with her husband on espionage-related charges have made a new request for bail, arguing her plans to flee the country stemmed from her disgust with Donald Trump — not because she feared arrest.

In court papers filed Wednesday, lawyers for Diana Toebbe introduced a text message exchange between her and her husband, Jonathan Toebbe, a former U.S. Navy nuclear engineer who is accused of trying to sell American secrets to an unnamed country. Diana Toebbe, who had been a high school teacher, is charged with helping him. They have pleaded not guilty. The couple has two young children.

In arguing she should be detained without bail while waiting for a trial, prosecutors had shown a judge a shorter version of the exchange in which Jonathan Toebbe says to his wife, “We’ve got passports, and some savings. In a real pinch we can flee,” and she responds, “Right. Let’s go sooner rather than later.”

In the new motion, defense lawyers say prosecutors turned over to them the full version of the exchange, which occurred on March 7, 2019. Their filing includes a longer excerpt, which begins with Diana Toebbe saying, “We need to get out,” and Jonathan Toebbe responding with an apparent reference to former Trump campaign chairman Paul Manafort: “At least he’s doing some hard time. And it’s short enough Trump likely (sic) won’t try to pardon him — he’s clearly already sold Mueller whatever he had.”

At the time, Manafort was facing criminal charges and appeared to be cooperating with special counsel Robert Mueller. Manafort was convicted, stopped cooperating, and ultimately was pardoned by Trump.

The Toebbes' exchange also contains a reference to French President Emmanuel Macron, which is notable because of speculation that the unnamed country to which the Toebbe’s had offered nuclear submarine secrets could be France. U.S. officials have told NBC News it’s not France, but they have declined to name the country.

The exchange continued this way, according to the court document:

DT: We need to get out

DT: To anywhere. To do something else

DT: To teach in international schools

DT: To take Macron up on his offer to harbor scientific refugees

DT: WE NEED TO GET OUT

JT: Baby, I don’t get what’s triggering this now — Manafort’s going away. The Mueller report is coming Real Soon™.

DT: It’s been too long. Nothing has changed. He’s still in power.

JT: Nothing in government moves that fast — believe me, I speak from personal experience.

DT: Manafort got a slap on the wrist. It’s a signal that the entire system is rigged

JT: We’ve got passports, and some savings. In a real pinch we can flee quickly.

Jonathan Toebbe then replied that he doesn’t “want to go back to making $50k a year. Especially not in a country where we don’t know the language,” and the conversation turns to the couple’s concerns over money.

Jonathan Toebbe said his nuclear engineering degree “is basically worthless overseas,” because the commercial nuclear industry is “dead,” but Diana Toebbe replies, “I cannot believe that the two of us wouldn’t be welcomed and rewarded by a foreign govt.”

The court document adds that Diana Toebbe “has reason to believe that her husband has also informed the government that she was not involved in his alleged scheme to sell classified information.”

After her detention hearing, the document says, Diana Toebbe’s father received a letter from her husband, saying: “I have high hopes that Diana will ultimately be exonerated.”

Prosecutors have not yet responded to the filing, but in court they argued that Diana Toebbe acted as a lookout while her husband left classified material for a person he thought was a foreign agent.

They point out that Jonathan Toebbe also wrote in a message to the person he thought was his handler — who was actually an FBI agent— that “there is only one other person with knowledge” of their arrangement. That person, the government alleges, was Diana Toebbe.

Prosecutors said Jonathan Toebbe, who worked on the Navy’s nuclear propulsion program, mailed a package of classified information in April 2020 to representatives of a foreign country, offering to reveal many more secrets in exchange for up to $5 million in cryptocurrency.

The U.S. government learned about the approach — the implication in court documents is the country alerted them, but that is not entirely clear — and the FBI reached out to Toebbe, pretending to be from the country he contacted.

Prosecutors said he at first wanted to deal strictly by email but later agreed to store the data on SD cards, which he would leave at designated “dead drop” locations.

Investigators said he concealed the cards in half a peanut butter sandwich, a chewing gum package and a sealed Band-Aid wrapper, making the drops in June, July, August and October. Court documents said the cards included designs for the Navy’s Virginia-class submarines, nuclear-powered fast-attack vessels incorporating stealth technology that are able to fire cruise missiles.

The couple faces up to life in prison if convicted.

From Bergamo to Beijing, Italy aims for more Olympic success

Blue Monday: How to give grumpiness the boot

Fortnite iPhone RELEASE DATE: Here's when and how you can play Fortnite on iOS

Drones may have caused an explosion on three oil tankers and a minor fire at airport extension in Abu Dhabi, police in the United Arab Emirates (UAE) say. Yemen’s Iran-aligned ... Read more »

Howard has worked for Supercars for the past two decades, most recently in what was effectively the COO role, overseeing event management and motorsport operations. He has been a central ... Read more »

A compilation of Jurgen Klopp scoring his greatest ever goals has gone viral on social media, showing just how prolific the former defender was during his playing days. The German ... Read more »

LIVE – Updated at 09:27 Boris Johnson has reportedly been interviewed by Sue Gray as part of the investigation into a number of parties at Downing Street, as of a ... Read more »

© Provided by The Guardian Photograph: PSL Images/Alamy Unilever has pledged to grow its health, beauty and hygiene business as investors dumped its shares after its failed £50bn approach for ... Read more »

© Shutterstock chrisdorney THE WORLD’S TEN wealthiest men doubled their fortunes during the first two years of the coronavirus pandemic as poverty and inequality soared, a report has said today, ... Read more »

© Vianney Le Caer, Invision, AP The city may still be deep in the throes of the Omicron surge and adapting to the latest Covid restrictions, but Paris Fashion Week ... Read more »

© REUTERS cameroonafcon17012022A.jpg Hosts Cameroon will look to make it three straight wins at the Africa Cup of Nations when they face Cape Verde in their final Group A contest ... Read more »

Australian Open 2022 LIVE: Latest scores and updates with Barty in action after Osaka and Nadal win

LIVE – Updated at 09:18 Follow all the action as the Australian Open 2022 gets underway in Melbourne. After all the drama surrounding Novak Djokovic’s visa cancellation was finally settled ... Read more »

Students in Ontario, Quebec, Manitoba and Nova Scotia return to school amid Omicron

Millions more Canadian students will head back to school today as officials across four provinces work to keep classrooms safe from COVID-19 and the threat of Omicron-driven staff shortages. © ... Read more »

Amy's Kitchen says its food is made with 'love.' Some at the factory say the job has left them injured.

Some factory workers who make meals at the family business describe an unforgiving workplace that pushes them past the point of injury. Read more »

The Masked Singer 2022 – Fans also saying the same thing about Poodle's identity, as Bagpipes is UNMASKED

THE MASKED Singer returned to our screens over the weekend with five secret celebrities singing in disguise. Bagpipes and Poodle landed in the sing-off with The Masked Singer's show detectives ... Read more »

These are the attorneys behind MLK's 'I Have a Dream' speech

Roy Keane has insisted there is something amiss with Manchester United star Marcus Rashford as he claimed there was something wrong with the culture at Old Trafford.  United only secured ... Read more »

Chuks Aneke has admitted that it was a tough decision to leave Birmingham City last week due to the club’s Championship status. Aneke called time on his stint at St ... Read more »

Centre-back Victor Lindelof believes fellow countryman and Manchester United team-mate Anthony Elanga has all of the necessary tools to make a name for himself in years to come, for both ... Read more »

The world's top 10 richest men made so much money during the pandemic that a one-time 99% tax on their gains could pay for the entire world's Covid vaccine production, and more: Oxfam

© Provided by Business Insider The wealth of the top 10 richest men in the world more than doubled during the COVID-19 pandemic. MANDEL NGAN/AFP via Getty Images; Nicholas Kamm/Getty ... Read more »

All testing requirements could be axed for vaccinated travellers, according to reports

Dan Neil to Aston Villa: Is it a good potential move? Would he start? What does he offer?

© Provided by Football League World League One – Sunderland v Plymouth Argyle Dan Neil has had an excellent season for Sunderland this year and reports are suggesting that he ... Read more »

Pierre-Emerick Aubameyang will undergo further tests on his heart and could return to the United Kingdom early after being sidelined at the Africa Cup of Nations, according to reports. The ... Read more »

© Reuters/JAMES GOURLEY Australian Open By Sudipto Ganguly MELBOURNE (Reuters) – American teenager Coco Gauff crashed out of the Australian Open in the opening round after an error-strewn performance against ... Read more »

Daily Covid cases decline in Mumbai, high deaths remain a concern Even though Mumbai has been recording a further dip in coronavirus cases for the past few days, the high ... Read more »

The education secretary has defended the prime minister as he said Boris Johnson did not know a Downing Street lockdown event was a party. © PA Boris Johnson is under ... Read more »

Julia Fox thinks she is the “ideal candidate” for the “position” of Kanye West’s girlfriend. © Bang Showbiz Julia Fox doesn’t care what people write about her The ‘Uncut Gems’ ... Read more »

‘Surround yourself with people who want more for you than you want for yourself.’ Daniel Kaluuya gave me that advice the night I won my BAFTA Rising Star award last ... Read more »

How to change your name in VALORANT

Drone attack may be behind Abu Dhabi tanker explosion, fire