The history of the R-rated teen slasher movie is rife with scream queens. Kiana Madeira is not one of them.

The 28-year-old actress didn’t think that her tough and resilient character Deena Johnson would be the type to scream bloody murder – even though bloody murder is what she’s usually encountering – in Netflix’s new “Fear Street” film trilogy.

“It just didn’t feel natural expressing myself in that way when scary things are happening,” Madeira says. “I just kept my head down and kept that intensity to want to fix the problem and chase the killer as opposed to feeling like a scared victim.”

Ready to see a great movie? These are the best yet in 2021, ranked 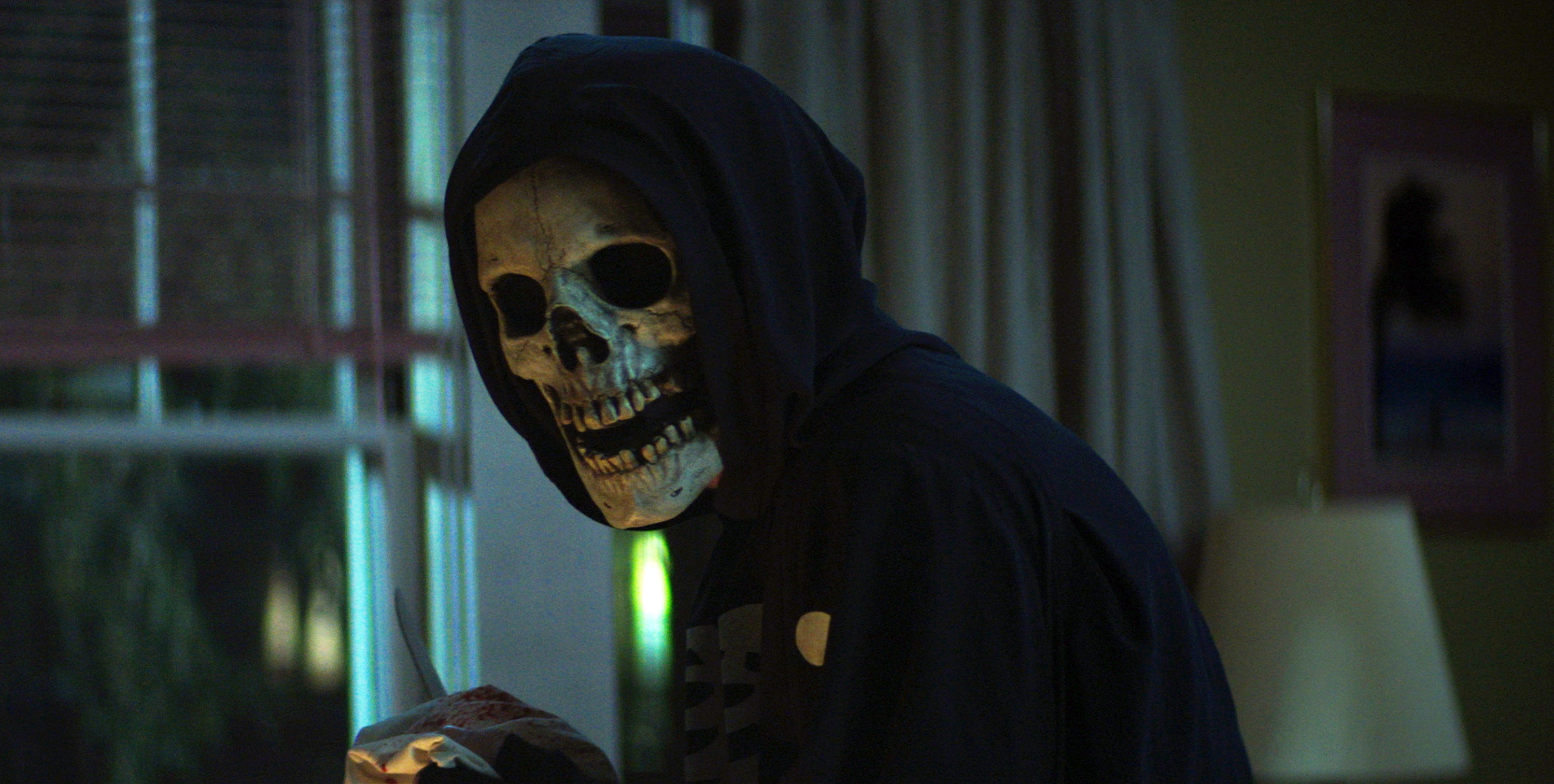 She’s not the normal horror-movie persona nor is “Fear Street” (the first film is streaming now) your average nightmarish stroll down Elm Street or machete-filled visit to Camp Crystal Lake.

Based on R.L. Stine’s young-adult book series, “Fear Street” aims to reinvent the teen slasher 25 years after “Scream” by combining the sex, blood, gore, four-letter words and, yes, fun of a throwback era with a queer romance, lead actors of color and a centuries-spanning mythology.

“Fear Street Part 1: 1994” introduces Deena and her friends in the town of Shadyside, deemed “Killer Capital USA” for its history of serial psychopaths. Shadysiders are mocked and marginalized by the residents of rival Sunnyside, where Deena’s ex Sam (Olivia Scott Welch) moved for a better life. Another Shadyside tragedy brings them back into each other’s orbit, and the heroes investigate connections between a 17th-century witch’s curse and the town’s ghastly body count.

“Part 2: 1978” (streaming July 9) rewinds back a couple of decades and sets the action at Camp Nightwing, where another Shadysider goes on a rampage. And “Part 3: 1666” (July 16) reveals the true history of the witch Sarah Fier and how she connects back to the 1994 storyline.

Fourth of July viewing:Movies to watch, from ‘Fear Street’ to ‘The Tomorrow War’

“At its core, ‘Fear Street’ is weirdly a love story and it’s the love of these two girls and their motivation to figure it out, to save each other, to realize they’re better with each other,” says Leigh Janiak (“Honeymoon”), who co-wrote and directed all three films. “That drives them further into ultimately realizing not only can we be together, we can change things, we can save the town.”

The mythology of Shadyside is that they’re “a group of outsiders told that they are ‘other’ or they’re not good enough and that they’re bad,” adds Janiak, and she wanted to change the narrative about what kind of people are in slasher films. In another time, for example, Sam and Deena might not have lasted very long in a movie: The “bury your gays” trope in film and TV existed for years. “You could have queer people in your movies, but they had to die in like a really horrible way to prove a lesson to the public,” Welch says. “That’s just so messed up.” 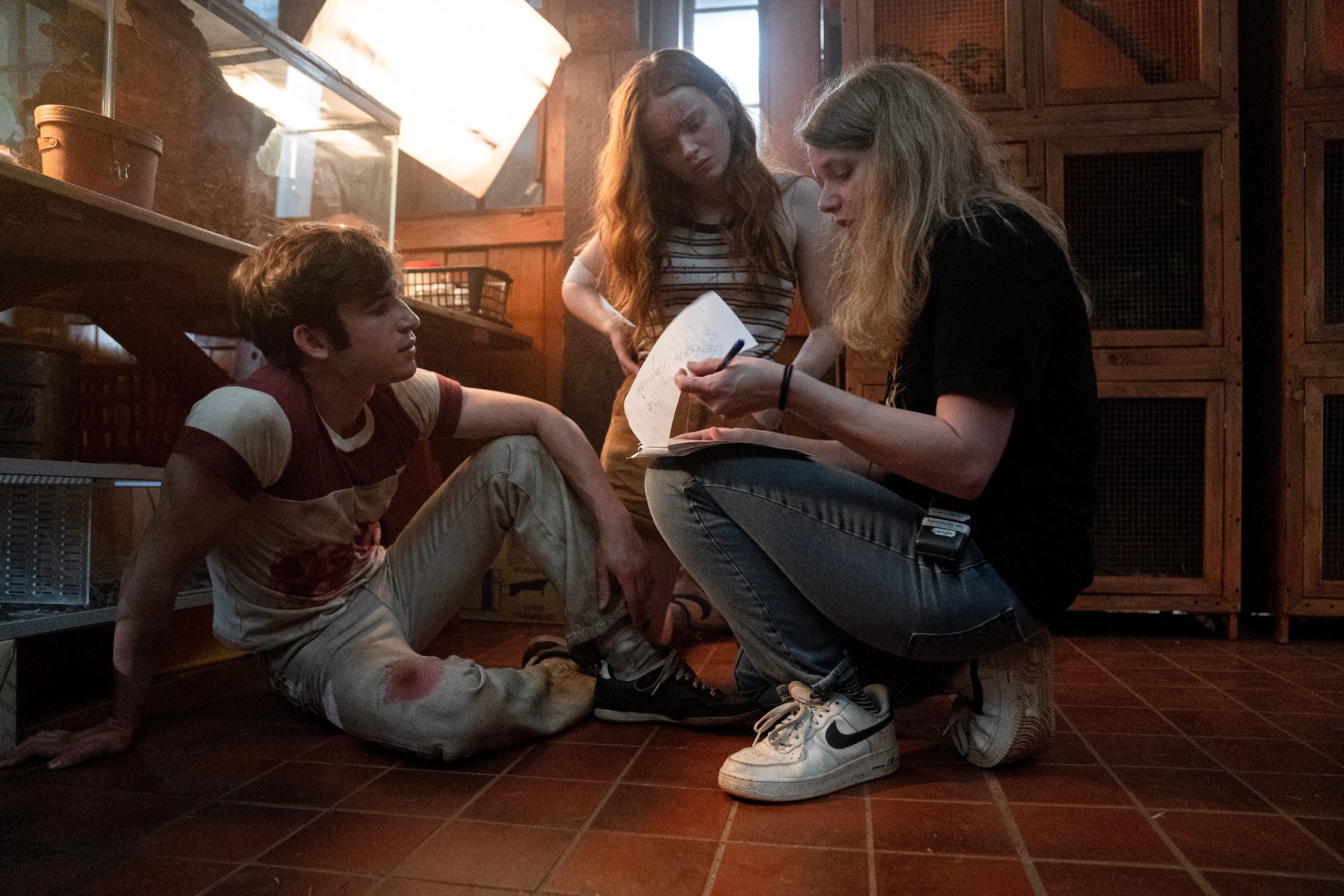 When Janiak was Sam and Deena’s age, she was already a horror fan raised on “Child’s Play,” “Psycho” and Stine’s “Fear Street” books. “There is a certain naughtiness,” the author says about their appeal. Stine’s teenage audience was “reading something that’s maybe a little bit bad for them.”

Janiak saw the original “Scream” when she was 16, and “it was mind-blowing how this movie could be so meta and so cool and then so disturbing at the same time.” With “Fear Street,” she pays proper tribute: The opening scene of the first movie, with “Stranger Things” star Maya Hawke as a mall bookstore clerk chased by a killer in a skull mask, is an homage to the classic Drew Barrymore prologue.

As for the trilogy’s grander scope, Janiak looked at the Marvel movies to lay “the groundwork for a horror universe” but also the “Back to the Future” films as inspiration for having “characters in different time periods, playing different roles and watching them evolve.”

While “Fear Street” has ambitious cinematic aspects, it also doesn’t skimp on the blood and guts. Stine, for one, gets a kick out of that. “It’s the only R-rated thing I’ve ever had in my life. Even my life isn’t R-rated,” the author quips.

Janiak wants to capture the curiosity of today’s youth the same way her generation begged their parents to rent an R-rated movie at a video store or turned on the TV late at night to watch something they shouldn’t.

“There was so much excitement in pushing the envelope of what was allowed. Hopefully, that exists with these movies, too,” Janiak says. “I don’t know if I should be saying this, but I hope that little 10- and 11-year-olds are like, ‘Oooh, I’m going to really scare myself here, but I’m doing it!’ ”

Dierks Bentley will rock the NASCAR nation at Phoenix Raceway. Here's how to watch

Top 5 things to do in the Lehigh Valley this weekend: Boo at the Zoo, Cider and more, Tract-or-Treat, Halloween Dance Party and Lisa Loeb

Artists & Makers Studios opens to the public for studio events

Radio station Alt 105.3 rebrands as Dave FM -- and we have questions

The Best Marvel Halloween Costumes for Kids Who Love Superheroes

Arjun Kapoor: I have had some terrific women like Parineeti Chopra and Alia Bhatt as my co-actors

© Provided by Pinkvilla Arjun Kapoor in a recent chat with Men’s Health magazine spoke candidly about the bond he shared with his late mother Mona Shourie. Boney Kapoor and ... Read more »

© Karwai Tang/WireImage Congratulations to Eve! The 42-year-old rapper and former The Talk co-host announced on Friday that she’s pregnant with her first child with her husband, 49-year-old Maximillion Cooper. ... Read more »

Adele Adele’s comeback single has been out for less than 24 hours, but she has already broken a major record. “Easy On Me,” the lead single from Adele’s upcoming 30 ... Read more »

Drake Drake famously started his entertainment career on the Canadian teen drama Degrassi: The Next Generation, on which he starred as Jimmy Brooks for seven seasons. And though his character was part ... Read more »

Carly Pearce Carly Pearce unveiled the honorees for the 2021 CMA Broadcast Awards by calling in to each winning radio station, the Country Music Association (CMA) announced on Friday (Oct. 15). The awards recognize the ... Read more »

Epic says it's ‘open' to blockchain games after Steam bans them

© Illustration by Alex Castro / The Verge Epic tells The Verge that it’s “open to games that support cryptocurrency or blockchain-based assets” on its game store, unlike its competitor ... Read more »

Brown Sugar: Why the Rolling Stones are right to withdraw the song from their set list

The decision by the Rolling Stones to remove their 1971 song Brown Sugar from the set list for their upcoming US tour has drawn both praise and criticism. Read by ... Read more »

© Provided by CinemaBlend Michael Caine as Alfred Pennyworth in The Dark Knight Michael Caine has been professionally acting since the early 1950s, and while older generations likely know him ... Read more »

If you’re down for live music, the Roots and Blues festival in Lancaster is the place to be.  “Really good music, really great live music,” said Discover Lancaster Joel Cliff. ... Read more »

East Tennessee has lost a bluegrass music legend. Phil Leadbetter, affectionately known as “Uncle Phil,” has died at the age of 59.  In late September, Leadbetter posted to Facebook that ... Read more »

Miley Cyrus Almost a year after the release of the rock-heavy album Plastic Hearts, Miley Cyrus has been hard at work on her follow-up ninth studio record, according to her new ... Read more »

© Provided by Your Tango Drake, Jimmy Brooks Photo: Kathy Hutchins / Shutterstock / Youtube James Hurst, a writer on the hit show ‘Degrassi,’ has made some surprising revelations about ... Read more »

He brought Flock of Seagulls to America 40 years ago. They just performed at his N.J. shop.

For a little while, I was falling in love. (If you were near a radio in the 80s, you’ll get the reference.) © Michael Mancuso/NJ Advance Media for NJ.com Wednesday, ... Read more »

© Provided by North Platte KNOP-CD The Prairie Arts Center Halloween art exhibit will be on display throughout the month of October. NORTH PLATTE, Neb. (KNOP) – The Prairie Arts ... Read more »

Elton John Elton John has returned to the top of the U.K. Singles Chart for the first time in 16 years, with his “Cold Heart” collab with Dua Lipa (remixed by Pnau) ... Read more »

Baby on Board! Darren Criss and Mia Swier Are Expecting Their 1st Child

© Provided by GamesRadar call of duty Vanguard Update: Today’s apparent “leak” of Call of Duty’s new kernel-level anti-cheat was reportedly seen as an inevitability by Activision, and a relatively ... Read more »

Gerry Goffin Gerry Goffin’s estate has entered a partnership with Primary Wave which will see the company acquiring a portion of his songwriting income. Known for their extensive publishing catalog, ... Read more »

Amnesia Ibiza After the pandemic forced two fallow seasons in Ibiza in 2020 and 2021, island mega-club Amnesia is closing an unusual era with an unusual pair of parties. The ... Read more »

© Provided by Pinkvilla Vidyut Jammwal’s action thriller film Sanak – Hope Under Siege is finally out. The film is directed by Vipul Amrutlal Shah and produced by Zee Studios ... Read more »

© Provided by TheWrap zoe-kravitz Tomorrow a new trailer for “The Batman” will debut during DC Fandome 2021, but that doesn’t mean fans have to spend the next few hours ... Read more »

© Courtesy of Hulu The most astute actors will tell you the best way to play a villain is not to be the bad guy. This is how Dopesick‘s Will ... Read more »

The Harry Potter franchise is expanding its reach with an all-new quiz show! A four-part competition event — titled Harry Potter: Hogwarts Tournament of Houses — is heading to TBS ... Read more »

Freddie Mercury: The Queen song that was originally about Martin Luther King - WATCH

Back in 1985, Queen performed at Live Aid in their most iconic performance ever and just a few months later they were back in the studio recording a new single. ... Read more »

'He can endure anything': Super-human Cameron Norrie's heart rate would kill most mortals

What is Torch'd? This 28-minute dance cardio workout brings the burn

Are you ready to get Torch’d? Welcome to the workout created by Isaac Calpito, a celebrity trainer and choreographer. Calpito has drawn upon his experience creating dances for the pop ... Read more »

This weekend downtown Orlando will be bursting with excitement for the first time since before the pandemic. © Immerse Immerse Orlando “We are very excited to see these events return. ... Read more »

© Daniel Doperalski/WWD Click here to read the full article. “This is a weird way to put it, but I always felt like they had the wrong person,” says Kacy ... Read more »

Less than 24 hours after releasing her first single in six years, Adele is already hitting milestones. The British superstar singer, 33, released “Easy On Me” on Thursday, and the ... Read more »

Guests will need more than just tickets to go to the Gold Over America Tour Friday night and any event going forward at Enterprise Center and Stifel Theatre.  © Provided ... Read more »

CNN’s Alisyn Camerota and Victor Blackwell channeled their inner Adele while celebrating the artist’s first single in six years. Adele released her single “Easy on Me” on Thursday. On CNN ... Read more »

'90 Day Fiancé': Alina Publicly Calls Out Steven for His Hypocrisy When It Comes to Mormonism (Exclusive)

© etonline Alina has had enough when it comes to Steven preaching about Mormonism, given his revelation to her that he’s had sex with women in the past, which is ... Read more »

Howie Mandel Reveals He Collapsed Due to Dehydration After Colonoscopy

Joanna Gaines Giving Away $50,000 in Honor of Magnolia's 18th Anniversary

Cleveland Orchestra legend to retire after more than 50 years

Darren Criss and Wife Mia Are Expecting a Baby: 'The Ultimate Collab'