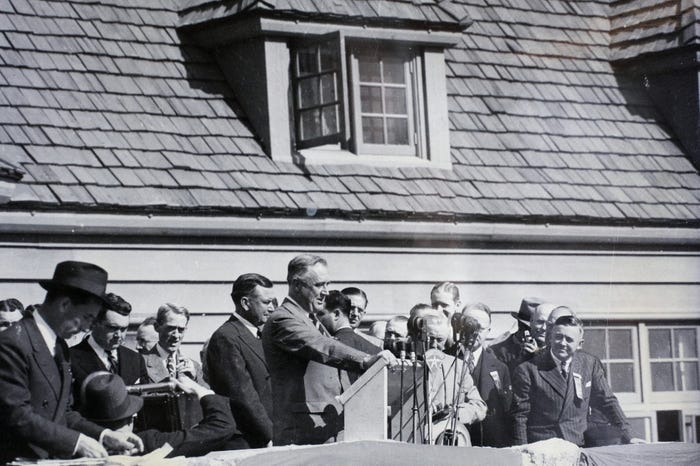 Nearly 90 years ago, President Franklin Roosevelt announced the New Deal, launching an unprecedented decade-long building spree that created parks, public art, monuments and much more. The Living New Deal, a group based at the University of California-Berkeley, has catalogued 16,000 of the sites it made possible. Spokesperson Susan Ives shares some of the New Deal's most notable contributions to the American landscape with travel writer Larry Bleiberg.

Red Rocks Amphitheatre, Morrison, Colorado:  Generations of music fans have enjoyed performances under the stars at this amphitheatre west of Denver. It was built by Civilian Conservation Corps and Works Progress Administration workers, who moved over 50,000 cubic yards of earth and rocks to shape the site. “It’s totally unique and acoustically perfect and carved out of the stone,” Ives says. U2, Dave Matthews and Stevie Nicks are among many who have recorded performances here.
More details:  redrocksonline.com 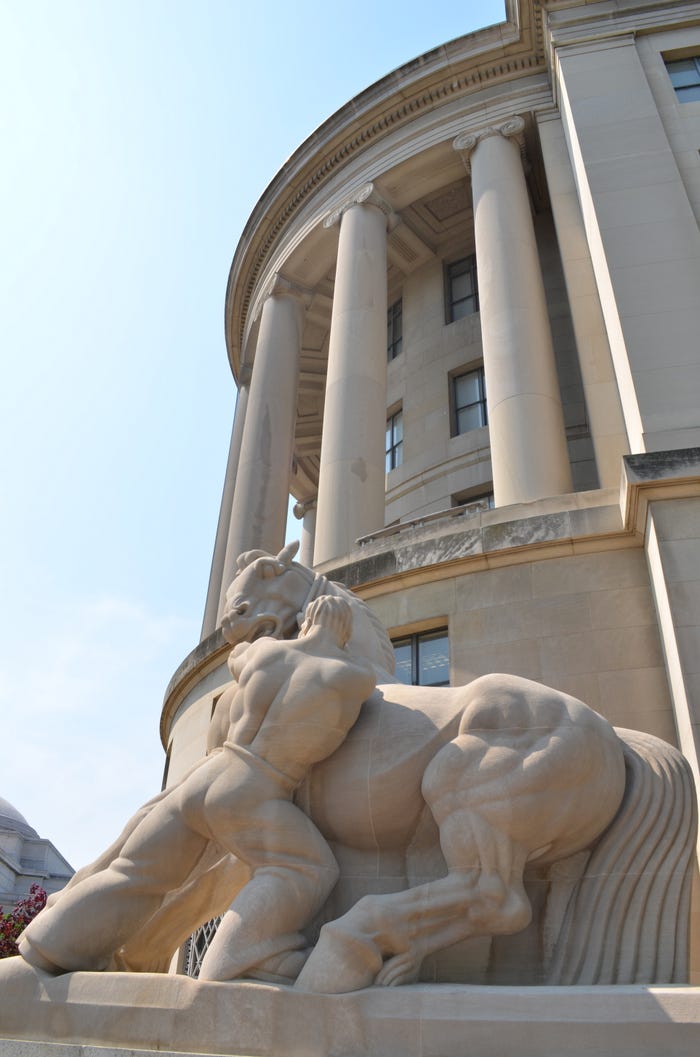 Federal Trade Commission Building, Washington, D.C.: Washington has hundreds of New Deal sites, from the National Zoo to the Jefferson Memorial. But even its government office buildings have something for visitors. At the Federal Trade Commission, located just off the National Mall, you’ll have a hard time missing the pair of 12-foot limestone statues called “Man Controlling Trade,” showing a muscle-bound human struggling to rein in a runaway stallion.
More details:  ftc.gov/about-ftc/our-history/building-images 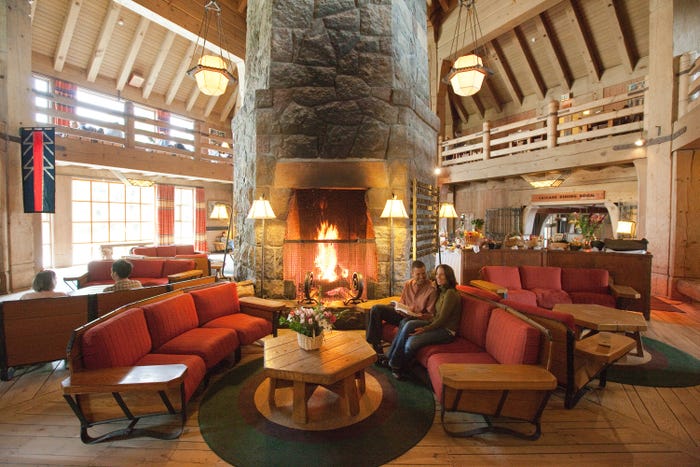 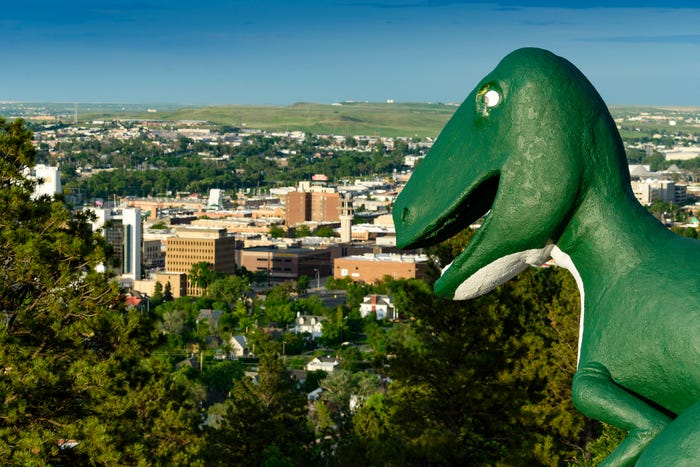 Dinosaur Park, Rapid City, South Dakota:  The New Deal created mammoth structures like dams and bridges, but it also had a touch of whimsy. How else to explain the seven giant prehistoric creatures grazing on a sandstone ridge overlooking Rapid City? The concrete residents of Dinosaur Park still celebrate the region’s many paleontological finds.
More details:  blackhillsbadlands.com/business/dinosaur-park 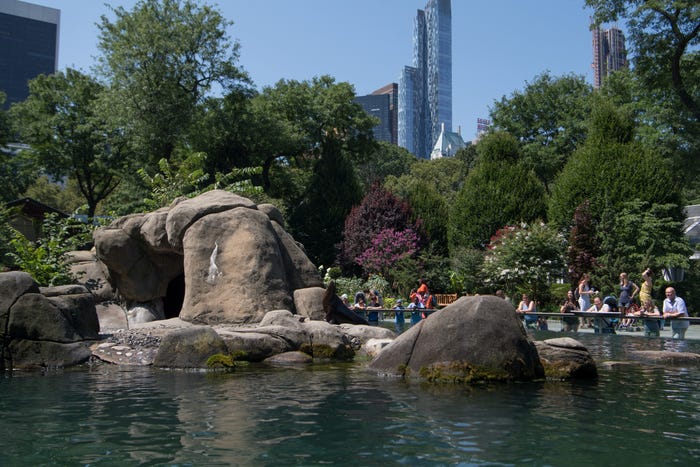 Central Park Zoo, New York:  The most prominent of more than 30 New Deal projects in New York’s famous park, the zoo was completed in just eight months. It was designed as a small-scale “picture-book zoo” to appeal to children. Although largely redesigned, you can still see traces of original construction, including the sea lion pool, and the gift shop, located in the original bird house.
More details:  centralparkzoo.com 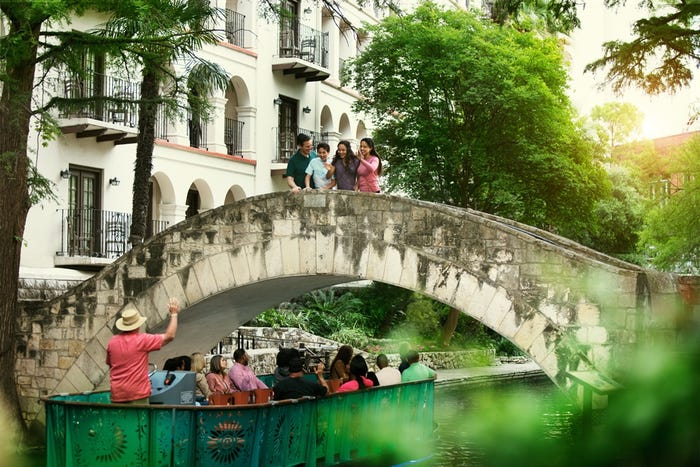 River Walk, San Antonio:  One of the most popular projects in Texas, the River Walk beautified and preserved the San Antonio River, creating a linear park below street level with bridges, sidewalks and thousands of plants. Funded by the Works Progress Administration, the downtown park’s now lined with restaurants and shops.
More details:  visitsanantonio.com 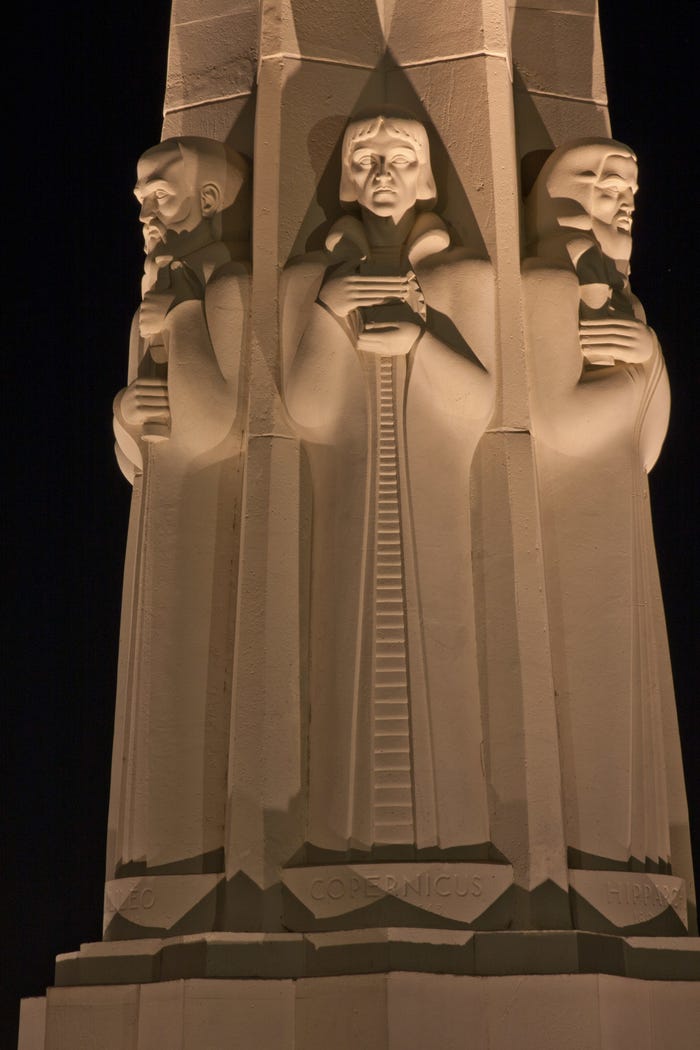 Griffith Park Astronomer’s Monument, Los Angeles:   In a city known for stars, you can pay homage to some of the world’s greatest scientists at the Griffith Park Observatory. “The CCC (Civilian Conservation Corps) did a lot of work there,” Ives says. “It’s an amazing space.” The monument, which features six astronomers including Copernicus and Galileo, was designed by a group of six local artists, including George Stanley, who also created the Oscar statuette.
More details:  griffithobservatory.org

Travel news latest: US flight searches up by 700pc as experts warn of rising fares

Covid-19 travel: what it's like to fly from Dubai to Oman now that the border is open

Fancy having a go at writing a play? Here's how

Expectations were Heightened after Week 1, but Growing Pains were Expected

© Provided by Eagle Maven on FanNation The schedule gets more challenging over the next month, so how quickly Nick Sirianni and Jalen Hurts can grow together and how they ... Read more »

Camels on the beach in Oman – Hans Harms/iStockphoto Travel companies are reporting a huge jump in bookings following the latest travel announcement, which will see the much-maligned traffic light ... Read more »

Can I fly to Dubai and Abu Dhabi from the UK? Travel list restrictions explained

© Ahmed Jadallah Dubai does not require visitors from the UK to be vaccinated. Reuters Follow the latest updates on the Covid-19 pandemic here Since the start of the pandemic, ... Read more »

Photograph: Gary Hershorn/Getty Images The US will lift Covid-19 travel restrictions to allow fully vaccinated passengers from the UK and EU to travel into the country from November, the Biden ... Read more »

What are the UK travel rules from October 4?

© Dan Kitwood Travelers arriving at Gatwick Airport in London. The UK’s traffic light system for international travel will be replaced with a measures on October 4. Getty Images Follow ... Read more »

The delta variant of the coronavirus continues to wreak havoc on the airline industry’s path to recovery, with domestic flight bookings declining 24% in August, according to new data. Consumers ... Read more »

Manhattan skyline, New York (PA) Joe Biden is apparently set to announce fully vaccinated travellers from the UK will be able to fly to the US from November. Monday’s White ... Read more »

How we made East Is East: ‘At Cannes, they only gave us one hotel room so we all slept on the floor'

Ayub Khan Din, writer My Pakistani father came over from India in the merchant navy, jumped ship in London in 1927 and moved to Manchester where he met my Irish/English ... Read more »

US to lift travel ban from UK and EU in November

US to lift travel ban from UK and EU in November, reports say – Evan Vucci /AP The United States plans to relax travel restrictions on vaccinated passengers from the ... Read more »

London's most exclusive areas: new luxury homes in the capital's most coveted neighbourhoods

The living room at Park Modern which overlooks Hyde Park (Fenton Whelan) With their elite One Hyde Park apartments, the world’s most expensive when launched a decade ago, developer Candy ... Read more »

What the new travel rules mean for under-18s

Sisters relaxing on inflatables – AzmanL/E+ The traffic light system has been scrapped. Starting October 4, the green and amber lists will merge and the pre-departure test for return to ... Read more »

Photograph: Borja Suarez/Reuters Spain’s tourism minister has been accused of insensitivity after suggesting a devastating and ongoing volcanic eruption on the Canary island of La Palma could be used as ... Read more »

© Provided by The South African Photo: Mpumalanga Tourism Board Now, this is a test of your nerve and resolve. Tourism bosses in Mpumalanga have confirmed that a R500 million ... Read more »

Te Awa Glamping: an off-the-beaten track getaway on private land in Taumarunui, on the banks of the Whanganui River. Read more »

By Kim Moody of RNZ At 8am on Monday the new MIQ ‘lobby’ system will open its virtual doors with 3000 spots on offer. New Zealanders stuck overseas will have ... Read more »

The New Zealand capital has long been the toast of Kiwi beer snobs but now Wellington has been named one of the top beer cities in the world. In an ... Read more »

What does Matariki mean to you? Read more »

A year’s worth of flights, accommodation and fuel is up for grabs, as Qantas launches its biggest ever giveaway in a bid to thank fully vaccinated passengers for their role ... Read more »

Melissa Carroll founded Wellness Retreats NZ and offers luxury retreats from Waipū to Franz Josef. Whether we’re stuck in lockdown and unable to visit a retreat – or enjoying the ... Read more »

Hamish Fletcher stays at Dunedin’s newest inner-city hotel, Ebb Location: A hop, skip and a jump from the Octagon in Dunedin’s centre, Ebb is nestled in behind Meridian Mall on ... Read more »

Where I'd Rather Be: At the theatre in Seoul

South Korea’s tourism body, the KTO, has launched an online programme showcasing a diverse range of Korean theatre and performance, which is free for audiences around the world. The series ... Read more »

Here's how to find the best accommodations for your visit to St. Martin

Photos: How the 1918 flu and COVID-19 pandemics compare

What to know about the new US international travel rules